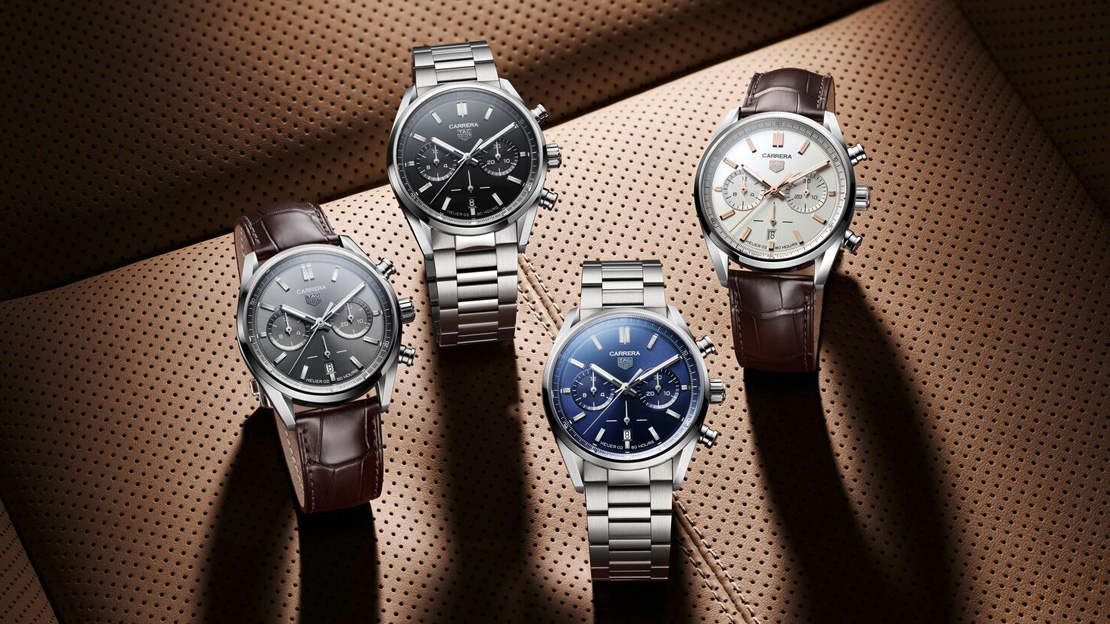 Earlier in the year, TAG Heuer presented a reinterpretation of their iconic silver-dialed Carrera chronograph from the sixties to honor the brand’s 160th anniversary. This time, the iconic chronograph collection welcomes the addition of another racing inspired timepiece elegantly designed to reminisce the styling cues of the past with a touch of modern flair. As with the 1964 Carrera referred to as the “2447S” which was reissued earlier, this new chronograph comes with a sleek stainless-steel bezel, which has been designed without a tachymeter scale to keep the overall aesthetics in line with the unforgettable silver-dial Heuer Carrera that was originally aunched in 1963. This stunning 42 mm timepiece maintains its chronograph functionality with two push buttons and subdials. Available in opaline black or sunray brushed blue, anthracite and silver, the dial features “azurage” subdials at 3 and 9 o’clock and a running small-second counter at 6 o’clock above a discreet date window. The beating heart of this timeless TAG Heuer Carrera is the brand’s proprietary movement, the Calibre Heuer 02.

The fully Swiss-made Calibre Heuer 02 movement, TAG Heuer’s in-house innovation manufactured at their Chevenez facility is visible through the transparent casebacks of the redesigned models are proof that the brand always uses their most advanced calibres to power the Carrera line. The Heuer 02 comprises 168 components, including a column wheel and a vertical clutch – signatures of improved chronograph timekeeping and high-quality manufacture movements – and boasts an impressive power reserve of 80 hours.

Former TAG Heuer CEO Jack Heuer dedicated himself to the intensive study of industrial design, which heavily influenced the DNA of his most beloved collection and has shaped the design and construction of all TAG Heuer Carrera models since 1963. With these new reinterpreted models, the flowing and elegant touches that sparked Jack Heuer’s interest decades ago are more apparent than ever. The uncluttered three-dimensionality of the original dial with its three subdials made it easy to read at a glance and was a truly groundbreaking design at the time – and it is now echoed on these signature innovations. Other details, such as the applied indexes that follow the angle of the flange, drawing the eye in to the time, take their cue from another area that inspired the TAG Heuer Carrera, one in which excellent legibility is of course of the essence: motor racing.

The new TAG Heuer Carrera Chronograph 42mm Calibre Heuer 02 will be available in either Black or silver opaline dials or for those that fancy brushed sunray finishes, a blue and anthracite finish. All four models will come with either a brown alligator leather strap or a stainless-steel H-shaped bracelet.