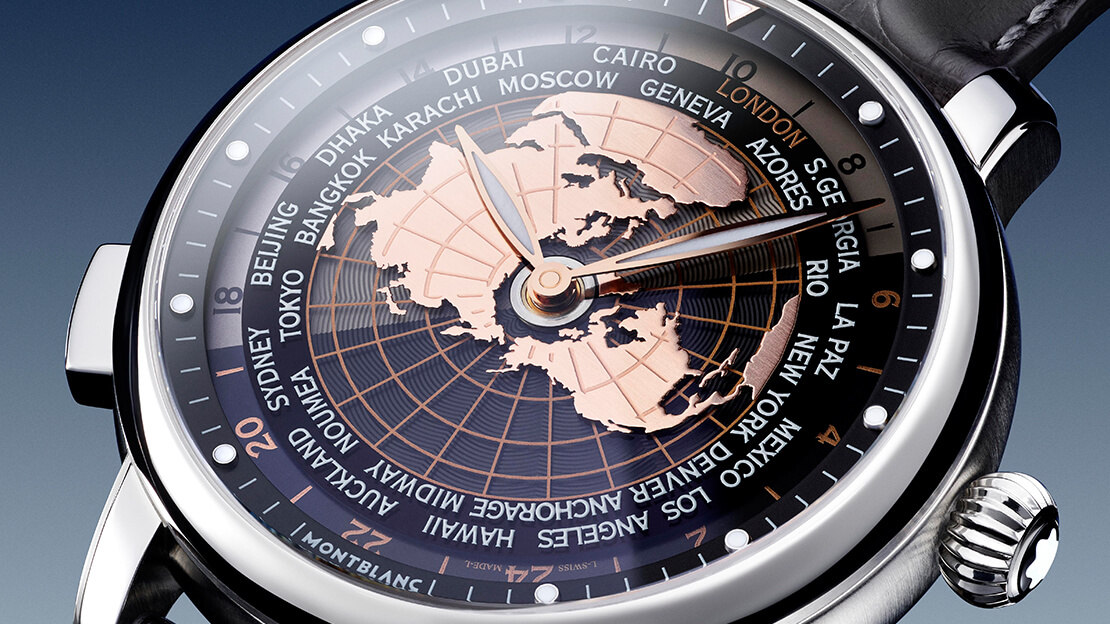 First revealed in 2014, the Montblanc Star Legacy Orbis Terrarum watch has been crafted in three configurations with the first version coming in blue and stainless steel, the second in brown and rose gold, and the third in a green limited edition for the United Arab Emirates.

Montblanc has chosen a black and grey dial with rose gold-coated continents and meridians for a new warm colour scheme for today’s sophisticated international citizens.

Orbis Terrarum
The term “Diviso Orbis Terrarum” comes from the Latin for “circuit of the world” and was the name given to a world map created by the Roman general Marcus Vipsanius Agrippa in the first century AD. Agrippa needed a practical map that could be used for military purposes. Disregarding the elaborate maps previously made by the Greeks, he decided to create a round world map based on surveys of the extensive system of military roads running throughout the Roman empire. The map was sent to all the great cities in the empire, and even if no known copies are believed to have survived, this passion for maps and representations of our planet lives on in the Montblanc Star Legacy Orbis Terrarum worldtime watch, with a complication that indicates 24 time zones at a glance.

Powered by the MB 29.20 automatic calibre with a Manufacture worldtime complication and a power reserve of approximately 42-hours, the Montblanc Star Legacy Orbis Terrarum watch was designed with style and functionality at its core and couldn’t be simpler to use.

How to read the time
Once set, the user only has to press on the pusher located at eight o’clock until the reference city is at the top. The hour and minute hands will automatically synchronize to indicate the time in the city of choice. There is also a day/night indicator that works with a rotating disc that changes from light grey (for daylight hours) to dark grey (for the night) giving an overview of the passage of the sun around the planet in a practical and intuitive way.

Design inspirations
The Montblanc Star Legacy Orbis Terrarum watch takes its inspiration from Minerva’s pocket watches from the end of the 19th and early 20th centuries, with their polished pebble-shaped cases, onion-shaped crowns, and useful complications. This new version comes in a 43mm stainless steel case that provides a strong visual contrast with rose gold-coloured continents and meridians and rose gold-coated hands and indications.

A Multi-layered construction
An upper sapphire crystal dial shows a rose gold-coated cut-out of the continents as seen from the North Pole. These are encircled by the names of the 24 cities representing the different time zones. The lower dial disc, in varying shades of grey, displays the day/night indication, while also showing the 24 hours of the different time zones. Note the interesting guilloché pattern on this disc under the continents, which has been developed in-house. It doesn’t only represent the passage of the sun, but also the world’s seas and oceans.

Other details include an elegant chapter ring around the outside of the dial that is punctuated by luminescent dots every five minutes, Super-LumiNova® enhanced hands for reading at night, water resistance of approximately 50 metres, and a dark grey alligator strap.