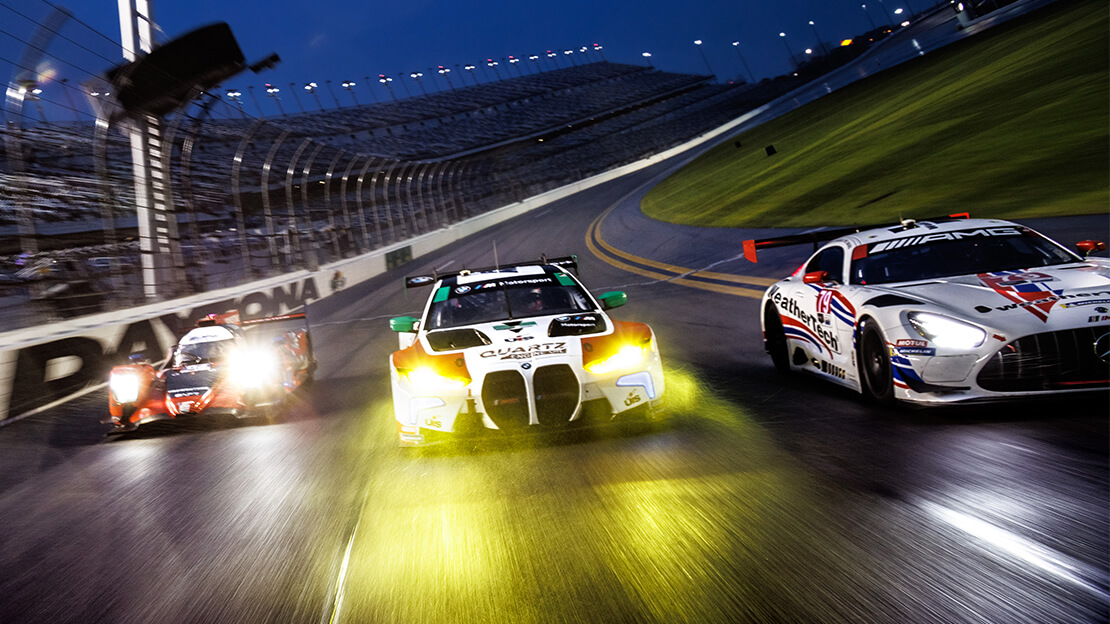 This week’s Rolex 24 At DAYTONA, from Saturday 28 to Sunday 29 January, will launch Rolex’s 2023 international motor sport season and marks a pivotal moment for endurance racing. The Swiss watchmaker has supported America’s legendary twice-around-the-clock contest since the 1960s, recognizing the feats of excellence and innovation which have made Daytona synonymous with speed for close to a century.

The official rehearsal for the race – known as the Roar Before the Rolex 24 – took place last weekend, as the drivers and teams familiarized themselves with the demanding 5.73 kilometre (3.56 mile) tri-oval circuit. During the three-day event, the five classes participated in qualifying, with the reigning champion, #60 Meyer Shank Racing with Curb-Agajanian Acura ARX-06, driven by Tom Blomqvist, clinching pole position in the final few seconds ahead of an incredibly competitive field.

On Saturday 28 January at 1.40 p.m. local time the Rolex clock will begin its 24-hour countdown as the 61-car grid tackles the 61st edition of this demanding contest. Renowned manufacturers, including BMW and Porsche, are returning to the top category, as the pioneering Le Mans Daytona hybrid (LMDh) cars make their highly anticipated debut. For the first time in endurance racing history, a transatlantic agreement will enable the LMDh machines to compete in championships and competitions across the globe. This includes the 24 Hours of Le Mans – the world’s oldest and most iconic endurance race – of which Rolex has been the Official Timepiece since 2001, and this year celebrates its 100th anniversary. The LMDh cars, competing at Daytona International Speedway as part of the revived Grand Touring Prototype (GTP) class, encourage ground-breaking design in the quest for ultimate performance and will feature nine of the most sustainable, hybrid technology cars in North America.

“The transatlantic relationship we now have in endurance racing is very important to the sport and its future; it shows comradery, respect and development. This year has brought a number of changes, with advancements in technology and engineering, alongside many new teams and drivers entering. That is what Rolex and motor sport are about – always improving and breaking down the boundaries of possibility.”

Famed for having more hours of darkness than daylight, the Rolex 24 At DAYTONA continues to welcome drivers from around the world, as they look to challenge themselves in extreme conditions and in the most avant-garde sports cars. The exciting GTP line-up at the event includes three-time overall Rolex 24 winner and IndyCar legend Scott Dixon, who partners Sébastien Bourdais and Renger van der Zande at Chip Ganassi Racing. Meanwhile, recently crowned 2022 FIA World Endurance Champion and winner of the 24 Hours of Le Mans 2022, Brendon Hartley, joins Wayne Taylor Racing. Following his retirement from Formula 1, Romain Grosjean will make his American endurance debut in the Grand Touring Daytona Pro (GTD Pro) class.

The deep-rooted alliance between Rolex and motor sport began in the 1930s when Sir Malcolm Campbell broke World Land Speed Records at the wheel of his car, Bluebird, with a Rolex on his wrist. Having supported racing at Daytona International Speedway since its beginnings, the Swiss watchmaker officially became Title Sponsor of the 24-hour race in 1992 and awards those who triumph at this demanding course with a specially engraved Oyster Perpetual Cosmograph Daytona. Sir Jackie Stewart, a Rolex Testimonee for 55 years and three-time FIA Formula 1® Drivers’ World Champion, says:

“To this day, Rolex continues to be involved with the best events in motor sport. The Daytona watch embodies the brand’s enduring association with the Rolex 24 At Daytona and is the ultimate reward for a racing driver.”