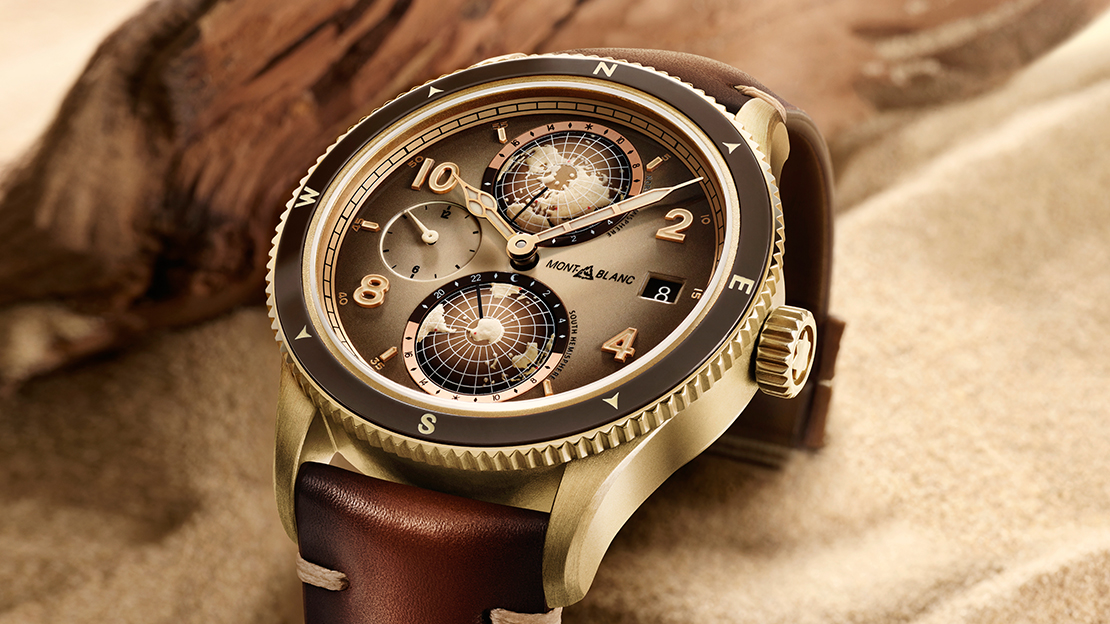 “Gobi cannot be won, because the look at this emptiness is almost unbearable” – Reinhold Messner

We like Montblanc. They are inventive. And they can be fun.

The have some extremely collectible expensive pieces, with gorgeous internals that remind you that their historic Minerva facility is one of their two actual manufactures.

But we like them also because they try things that most others won’t.

They do a lot with travel, which makes sense. They are part of a global luxury brand, and the other products under the MB star are indeed travel staples. They also make quite interesting travel watches. And they come in at very approachable prices given that you are getting something that no one else would really come up with.

The Geosphere line is exactly that. A travel watch that gives you a second time zone, with home time at 9 o’clock and local time on the central hours hand. But it also basically gives you the world, both halves. On the dial are two depictions of the globe that rotate in opposite directions, and they are quite fun to play with. Quite readable really, and definitely not something you will see everyday.

The latest release is the latest in the series, and is basically dedicated to the travel across the planet’s deserts. More exactly, it is a nod to a five-week-long 2004 solo trek across 2000 kilometers of the Gobi desert by adventurer and explorer Reinhold Messner. The new 2021 novelty is, quite appropriately, somewhat sand-colored.

Other models included a model with a black face and khaki-brown hands, indices and details, probably the most striking in its contrasts. There was also a model with a blue face and white details, which looked quite interestingly polar and refreshing. There was also a blue face limited edition with a bronze case and details to match. This piece was also connected with Reinhold Messner, in particular with all the peaks he has climbed over his exploration career.

Besides color, then, why the desert? Interestingly enough, Messner said that it was on the journey in the desert that time actually became the most important. When he was on the top of Mount Everest, he said, he knew he could get down and how and roughly when. In the huge featureless desert, he found that he didn’t have those confidences in the same way. In the Gobi desert, he didn’t know any of that. Time got lost. The adventuring experience changed. The challenges changed. He changed.

The back of the new watch has a unique engraving that shows the famous Flaming Cliffs of the Gobi Desert. There is also a wind rose compass with a decoration representing the wind whose patterns are inspired by traditional Mongolian monuments. This casebook wasn’t easy to accomplish. The casebook is titanium, but all the work is done by laser for different effects from creating the relief to defining the finish (matte or shiny) to actually coloring the titanium using laser-generated oxidation.

The Montblanc 1858 Geosphere Limited Edition 1858 uses the Manufacture automatic calibre MB 29.25. The face may look complicated, but it is rather easy to set. In crown position 2, everything moves. You adjust the watch first by aligning the GMT/UTC line to match current London (GMT) time then you adjust the minutes. That sets the globes to, basically, time everywhere. Then you set the hour hand to your own local time by putting the crown to position 1 and moving it in one-hour increments. There is also a second time zone subdial at 9 o’clock, which can be your quick-access home time (as opposed to looking for home on one of the two globes). This is set using a corrector at 10 o’clock on the case side.

This latest model of the inventive and adventurous Geosphere line is arguably the most subtle, with less attention-calling contrast than other models. It definitely has it’s own appeal, and will be limited 1858 pieces.

The Gobi Desert is Asia’s largest one, spanning 1,600 km across China and Mongolia, and is the fifth-largest in the world. It is also recognized as one of the most famous paleontological sites in the world where important fossils can be found. The desert is a combination of sand and exposed bare rock. It plays an important role in history as part of the great Mongolian Empire, serving as the location of several important cities along the Silk Road.

In 2004, Reinhold Messner was the first to trek solo 2,000 km (1,250 miles) across the Gobi desert. Following an old dream, the mountaineering legend wanted to try to cross the Gobi desert lengthways in his own way: alone, completely on his own and without any logistical support. His 2,000-kilometer hike through the West Gobi and over the Altai Mountains becomes an unprecedented borderline experience for him, physically and mentally, and an act of self-determination with an uncertain outcome. “Gobi cannot be won, because the look at this emptiness is almost unbearable” he wrote later in the book “Gobi”.

Reinhold Messner (born 17 September 1944) is an Italian mountaineer, explorer, and author. He is renowned for his pioneering ascents of the world’s highest peaks, and his variation of the Seven Summits Challenge, known as Messner’s List.

He made the first solo ascent of Mount Everest and the first ascent of Everest without supplemental oxygen along with Peter Habeler. He was also the first person to climb all 14 peaks over 8,000 metres (26,200 feet). In 1989-1990, Reinhold, his brother Hubert and German explorer Arved Fuchs were the first to cross Antarctica and Greenland on foot without the use of dog sleds or snowmobiles. In 2004, he was also the first to trek 2,000 km (1,250 miles) across the Gobi desert on his own. He has published over 60 books about his experiences, has served one term (1999-2004) in the European Parliament, where he championed environmental issues, and in 2018, he received the Princess of Asturias Award in the Sports category, along with fellow mountaineer Krzysztof Wielicki.

He is now overseeing the creation of 6 museums dedicated to alpinism and the mountains. Messner’s achievements and inspiring journey through a life led by passion are living proof that following your personal path of success and fulfillment defines you as a person, making him the perfect Mark Maker for the Maison, celebrating those who have already found true vocation and inspiring others to express their full potential on their own terms.