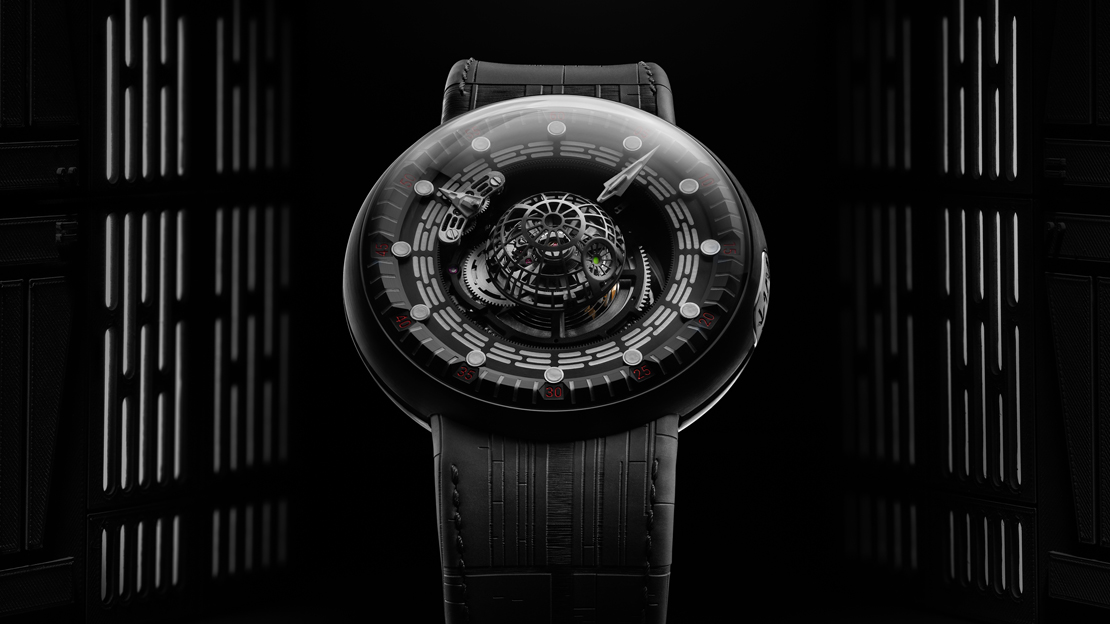 The X-Wing fighter. Light sabers. The droids C-3PO and R2-D2. All these are symbolic representations of the cult classic Star Wars. If there was one thing, aside from Darth Vader, that best represented the Dark Side, it would be the Death Star, an incredibly huge space station capable of destroying entire planets with its laser powered by kyber crystals.

Kross Studio collaborated with Lucasfilm to produce a Star Wars-inspired timepiece that features the Death Star at the centre of the dial, which incidentally houses the centrally located tourbillon. Continuing on with the theme, the hour and minute hands take the shape of an Imperial-Class Star Destroyer and a Super-Class Star Destroyer respectively.

The 45 mm case is made of grade 5 titanium with black DLC coating. It has a dome-shaped anti-reflective sapphire crystal. The traditional crown system has been replaced by an ingenious, inset push-button system. Kross Studio developed a D-ring shaped crown on the grade 5 titanium case back for winding the watch. It has been stowed out of sight to help maintain the timepiece’s sleek, space-age styling.

To further experience the Star Wars experience, this Death Star Tourbillon watch comes in a very unique box. In the movie Rogue One: A Star Wars Story, kyber crystals were stored in armoured crates for transport. Kross Studio carefully reproduced the crate in half scale to house the watch. This wood and aluminum case was fully hand-assembled and hand painted to the smallest detail, from the electronic control panel to the backlit manifest panel inscribed in the Aurebesh language of the Galactic Empire. Quick release buttons are on the underside of the case, allowing a quick change of straps from the included calfskin leather strap to either of the two other included rubber straps.

The Death Star Tourbillon watch is limited to only 10 pieces.