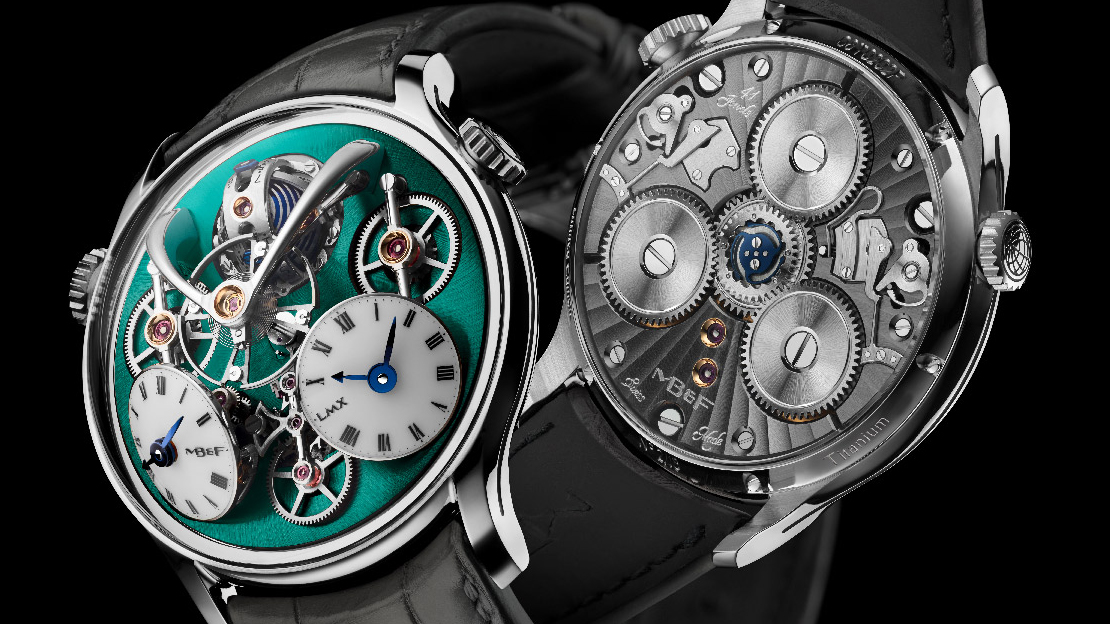 MB&F released their first Legacy Machine in October of 2011. Prior to its release, they already launched four Horological Machines which people labeled as “audacious”, but I guess in a good way. MB&F founder Maximilian Büsser decided that it was time to do something different – again – and came out with the Legacy Machine No 1, a timepiece that was like no other.

It was a bold and gutsy move to present the watch world with such a design. With the help of Jean-François Mojon (known for his innovative engineering) and Kari Voutilainen (a living legend of classic watchmaking), the Legacy Machine No 1 was presented with two dials, a “flying” balance wheel, and a domed crystal. It was bold. It was different. It was unconventional. But it was applauded.

On this tenth year, MB&F proudly presents the LMX, an extraordinary timepiece that pays tribute to the first Legacy Machine, with something a little extra. Much like the first one, the LMX has two dials, each with its own display of hours and minutes. The dial on the right is set by the crown bearing a battle axe at the 2 o’clock position. This crown also winds the movement. The dial on the left displays a second time zone. This is set by the crown at 10 o’clock which, by the way, is appropriately engraved with a globe. The two dials share the same seconds display, located at 6 o’clock.

Unlike the first Legacy Machine, the dials are tilted at an angle. To accomplish this, the transfer of energy needed to be changed from a horizontal to a vertical plane. This was done by adding conical gears to facilitate the transfer.

At the 12 o’clock position, you will find a most unusual, yet unique interpretation of the power reserve display. The hemispherical indicator showcases the movement’s 7-day (168 hours) indicator. In this display, you have the option to select between two modes of counting down the days. Two markers are positioned on the opposite sides of a hemisphere; one framed by an arched scale numbered 1 to 7, and another with a scale showing the days of the week. The wearer can choose either one of these displays by continuing to wind the battle axe crown (at two o’clock) even after the power reserve is fully replenished.