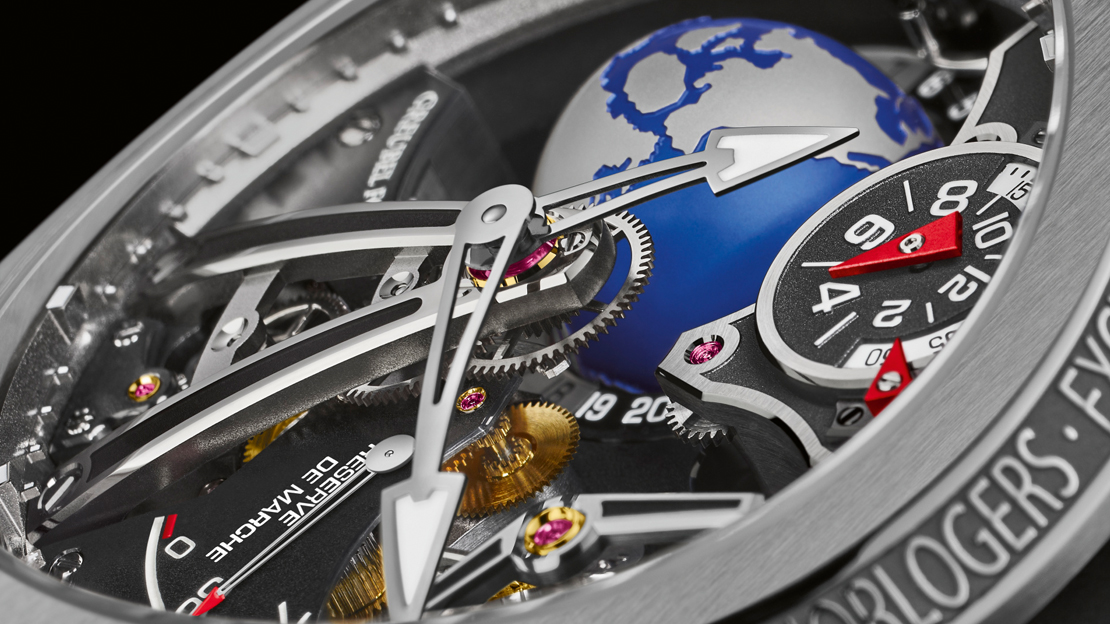 Greubel Forsey released the GMT Black watch in 2015 and the success paved the way for their newest release, the GMT Sport. Robert Greubel and Stephen Forsey have created their most sport-oriented watch so far. The GMT Sport timepiece is lightweight, ultra-strong, and fantastic to look at.

The watch may seem busy and complicated at first. With all that it has to offer — including hours and minutes, seconds, power reserve indicator, tourbillon, a rotating globe, and much more — that’s no surprise. What is surprising though is that it all just works. As Greubel Forsey properly claims, the watch is a “successful alliance between ergonomics, technicity, and architecture.”

The titanium case looks round from above but has arched and ovoid shapes when viewed from other angles. This allows for the many features of the watch to be properly and safely encase in, well, the titanium case. The aesthetic is classic Greubel Forsey  – suspended bridges, wheels, and dials – and definitely impressive. A nice touch is the stain-finished bezel with words like ‘perfection’ and ‘harmonie’ engraved on it.

There are the expected hour and minutes hands so you can tell the time, but the GMT Sport really gives much more than that. The auxiliary dial between 10 and 11 o’clock has the small seconds and a second time zone. Greubel Forsey really know how to make the most of the space on a timepiece. At the 1 o’clock is the gold-detailed tourbillon, slightly inclined at 25 °. The angle aids in giving the tourbillon an improved chronometric performance. The power reserve indicator is at the 3 o’clock, and it reminds me of a car’s speedometer. Note that this watch can have a 72-hour power reserve – with all the complications in this watch and yet it can still keep running for three days.

A very eye-catching detail on this watch is the globe. This terrestrial rotating globe, representing the Earth as seen from above the North Pole – is beautiful. The blue on the globe provides a nice break to the predominantly black and silver color palette.  The touches of gold from the tourbillon and gears also provide a nice counterpoint to the touches of red on the tips of the different indicators.  An understated and elegant design point is the Greubel Forsey name by the globe. It’s not overt because the watch with its craftsmanship speaks for itself.

The Greubel Forsey GMT Sport watch is definitely a watch worth exploring.  Aside from the various functions, it’s a gorgeous piece of craftsmanship. All the design features and functions combine to create a watch that is legible, efficient, and handsome. With only 11 pieces created, the GMT Sport is sure to be on everyone’s wish list.