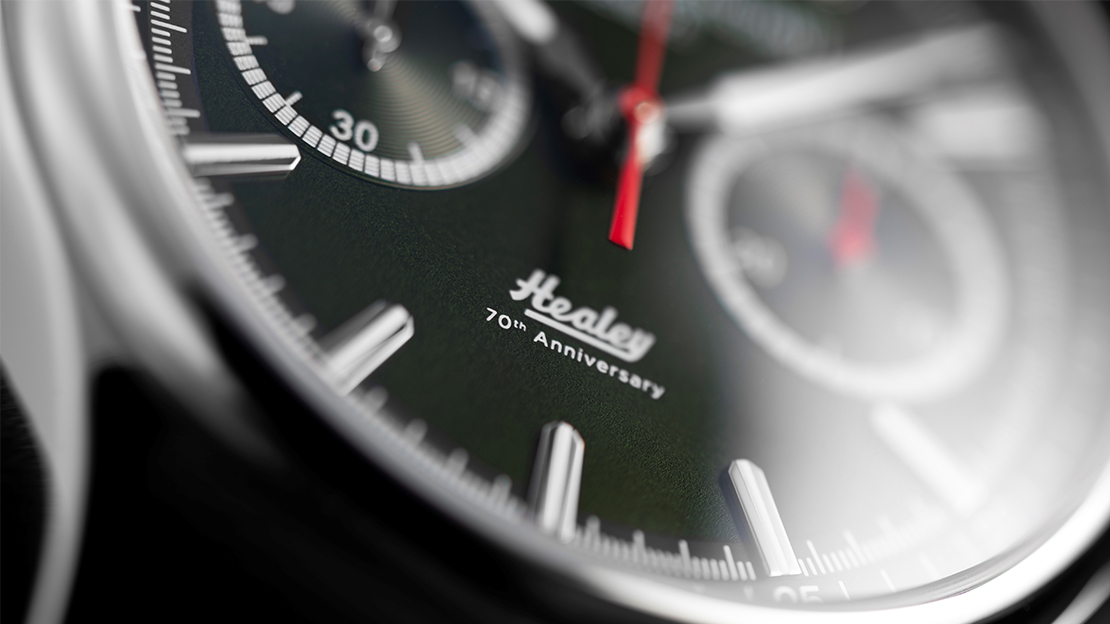 In 2022, Frederique Constant is celebrating the 70th anniversary of its long-standing automotive partner, Austin-Healey, and is renewing its intangible loyalty with two exclusive limited editions. For the occasion, its new mechanical chronograph, the Vintage Rally Healey Chronograph Automatic, has adopted the “British racing green” colour of the legendary vintage car with the NOJ393 number plate. With a bicompax dial and two racing red hands, this timepiece is produced in two versions: the first, limited to 10 watches with the 70 number visible at midday, and the second, with a run of just 700 watches, with the “12” in its normal place.

Three letters, three numbers: NOJ393. This is the number plate of the famous Austin-Healey 100S, bought in 1969 by a fan of the legendary car. It was the outcome of the collaboration between the Austin Motor Company and that of the driver, Donald Healey, also a creator and designer. A responsive and distinguished racing car, the only one of its kind, of which one of the last original cars was this famous NOJ393 purchased at that time for £155. It fetched 1 million euros when it was sold in December 2011.

This out-of-the-ordinary enthusiasm demonstrates the power of attraction the vintage Austin-Healey has on collectors of beautiful machines. Its perfectly controlled lines, simultaneously rounded and tight, have made it a model of styling. Its legendary “British racing green” livery has become a classic.

2022 marks the 70th anniversary of the creation of this legend, of which Frederique Constant has been the key partner since 2007. The occasion to offer vintage car fans a collector’s piece to wear on the wrist: the Vintage Rally Healey Chronograph Automatic.

Two limited series, one shared DNA
The new Vintage Rally Healey Chronograph Automatic is offered in two versions sharing a 42 mm steel case as well as a common look. Except for one small detail, which makes all the difference: only 10 timepieces will be produced of the first, and instead of the “12” index at midday, Frederique Constant has placed the “70” which celebrates the creation of the Austin-Healey company. The second, limited to 700 timepieces, prefers the watchmaking tradition in which the number 12 is in its normal place and the “70th Anniversary” wording is at 6 o’clock.

On the left, the seconds counter for the timing part; on the right, the chronograph’s minutes counter. The index and timer are in pure white for perfect legibility on the matt-finish dial, indispensable for a watch dedicated to motor racing. The racing spirit of the piece is emphasised by the two hands of the chronograph which stand out in a bright red hue: the central hand for the seconds and the 30 minutes countdown hand at the three o’clock position.

The hours and minutes hands, as well as the indexes are silver-tone and luminescent. Along the 12 o’clock – 6 o’clock axis the two brand logos mirror each other, a symbol of their long and faithful union: “Frederique Constant – Geneva” at midday, “Healey” at six o’clock, in its legendary original font.

As for the chassis, the timepiece is features an open case back onto the movement, etched with a “Limited Edition XX/10” or “Limited Edition XX/700” number. The watch is worn on an asphalt black strap finished with two lines of topstitching, like two white lines marking the edges of the track.

To perfect this parallel with motor racing, the new Vintage Rally Healey Chronograph Automatic comes in its dedicated gift box alongside a miniature replica of the famous NOJ393.

Lasting loyalty
The union of Frederique Constant and the Austin-Healey company is no real coincidence. Both are driven by the same passions and values which brought them together in 2004 and continue today: the love of beautiful machines, precision, the celebration of timeless design, the combination of leather and metal, comfort and above all, a certain art of living. Frederique Constant’s Vintage Rally collection, dedicated to this partnership is all of that …and more.