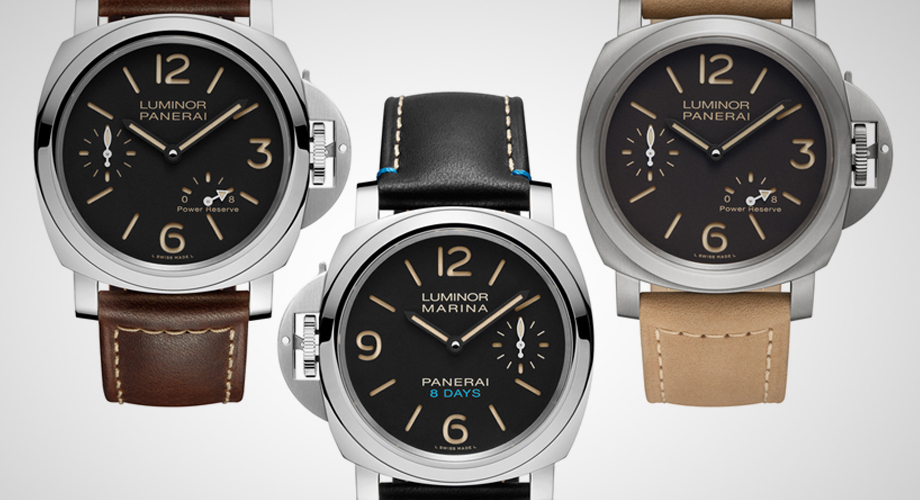 HAVING introduced the new collections of Luminor Base Logo and Marina Base Logo, Radiomir Logo 3 Days and Black Seal Logo 3 Days, and the boutique-exclusive Radiomir 1940 3 Days, it would be easy to assume Panerai would not be launching anything fresh so soon. Obviously, such a guess is now proven wrong. And, clearly, Panerai is on a roll.

This is because the resurgent watchmaker has brought out three new Luminor pieces, all of which sharing in-house, hand-wound movements packing eight days of power reserve, as well as a couple of subtle touches that are reinterpretations of elements the brand has previously used. Released were the Luminor 8 Days Power Reserve Acciaio (PAM00795), Luminor 8 Days Power Reserve Titanio (PAM00797) and Luminor Left-Handed 8 Days Acciaio (PAM00796).

The PAM00795, as the Acciaio in its name declares, has a case made from stainless steel. Measuring 44 millimeters across, it is unmistakably a Panerai as identified by its round cushion case and the Luminor line’s iconic crown guard. Defining its face are more classic Panerai cues, like a black sandwich dial, large numerals and indices, stick hour and minute hands, and a small second counter at 9 o’clock. The watch’s brown leather strap has beige stitching to complement the beige Super LumiNova-coated numerals and indices.

But the watch also gets a power reserve indicator at 5 o’clock. Now while the indicator’s position has been seen on previous Panerais, its treatment appears sleeker, thanks to an arrow hand that evokes those on some of the brand’s models from the late 1990s — a time when Panerai was on the cusp of becoming a star anew.

Ticking beneath these familiar, if slightly tweaked elements, is Panerai’s new calibre P.5002, a 21-jewel movement that spins at 21,600 vph and is kitted with Incabloc shock protection.

Similar in specifications, including the movement and case size, is the PAM00797, although the Titanio tag identifies the watch as having a case — and crown guard — made from polished and brushed grade 5 titanium. Panerai says this material is more resistant to corrosion while being 40% lighter than steel. Visually, easily marking out the Titanio from the Acciaio Luminor 8 Days Power Reserve are its dark brown dial (the furniture arrangement stays) and light brown leather strap.

Certainly, there is no mistaking the Luminor Left-Handed 8 Days Acciaio from the other two. True, it shares the same 44-millimeter steel case, black sandwich dial and leather strap as those on the Acciaio version, but this watch wears its crown on the left side — a move Panerai does from time to time. Fact is, the brand has been making “left-hand” watches since the 1940s, when it supplied the Italian Navy with these. And they’re no mere folly either; the crowns were moved to the left side to allow navy frogmen to wear their compass and depth gauge on the left wrist.

Also, distinguishing the PAM00796 is its dial layout. Because the crown has shifted to the other side, so too has the second subdial — it’s now placed at 3 o’clock, maintaining the asymmetry of the timepiece. Just as noticeable a change are the addition of “Marina” below the “Luminor” at 12 o‘clock, and the “8 Days” inscription in bright blue, which sits between the “Panerai” and “6” markings. Rearranging the elements was needed as the power reserve indicator disappears from the dial and moves to the back of the watch.

This is now possible as the leftie Luminor gets a sapphire crystal “porthole” on its caseback, so the power reserve indicator remains visible through the glass. Put on display too are portions of Panerai’s new calibre P.5001, which is almost completely identical to the calibre P5002 had it not been for the location of their power indicators, and the fact that the P.5001 has exactly one more component compared to the P.5002 — or 146 for the former versus 145 for the latter. This says Panerai is paying attention to details.

And that genuinely is no left-handed compliment.