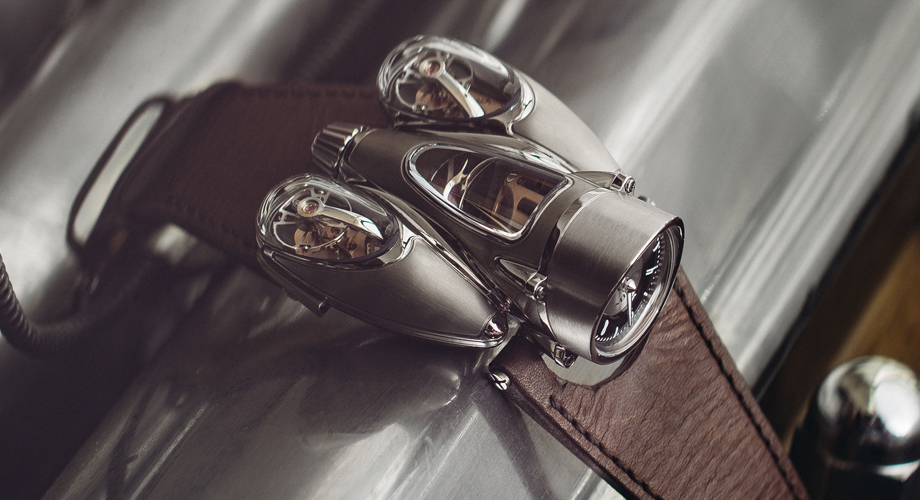 NOT without reason, MB&F has christened some of its products with names like “Thunderbolt,” “Aquapod” and even “Frog.” One look at them and it’s instantly apparent the names are actually quite tame compared to the creations they are attached to. Yet this touch of whimsy works, and that’s simply because the creations in question are not mere watches, but rather genuine horological machines.

Since 2007 MB&F’s Horological Machine (HM) collection has consistently re-imagined not just how timekeeping, but also how haute horlogerie in general, can be presented. The brand does not merely make unreal Seussian cases on which time is displayed, but actually lavishes these cases with substantial cosmic complications. That the timepieces look mind-bogglingly awesome is just a bonus.

MB&F has also taken pains to draw design inspiration from certain recurring themes. While it correctly describes its HM1 as the collection’s “Genesis,” its HM2, HM3 and HM6 were all influenced by outer space imagination. HM4, or the Thunderbolt, which also spawned the Razzle Dazzle and Double Trouble, took to the sky. HM5 and HM8 evoked supercars and racecars. HM7, the Aquapod, plunged into the waters.

MB&F’s new HM9, or the “Flow,” is as evocative of its name. The latest among the Horological Machines has aesthetics shaped by aerodynamics as the science was interpreted during the 1940s and 1950s, as well as by the Mercedes-Benz W196 and the Buick Streamliner. But, unlike the HM5 and HM8, which were modeled after land machines like the Lamborghini Miura and Can-Am racecars, the Flow is just as guided by aviation — the de Havilland Venom jet, in particular. Now these are powerful design influences, but to which the Flow amply lives up.

This mix of influence is instantly apparent in the two versions in which the HM9 Flow comes. One is the Air edition, which is marked by a dark movement and an aviator-style dial, while the other is the Road edition, which has a rose gold-plated engine and classic speedometer dial. Both HM9 Flow editions are housed in grade 5 titanium cases, with each limited to only 33 examples.

But regardless of which edition, what the HM9 Flow looks like is a jet-powered aircraft that can be strapped to the wrist by means of a leather band. Two “jet engines” flank a “fuselage.” The jet engines, quite oversized in relation to the fuselage, contain a balance wheel (and its mechanism) each, beating (at 18,000vph) independently of one another. Sitting between the two escapements, inside the fuselage, is a planetary differential gear that averages the output of both balance wheels to provide a single time reading. Major portions of these components are visible through sapphire crystal panes on top of the engines and body.

Placed at the fat end of the body is the dial, which is on the small side, and on which time is read only by a hour and minute hands. It appears legible though. But, clearly, the ingenious layout of the movement is the showcase here — well, this is what’s seen on top of the timepiece in the first place.

Sitting at the thin end of the conical fuselage, opposite the dial, is the winding and setting crown. This component has received major fluting, looking like it’s easy to turn, and also appears like it’s some sort of turbine. At either side of this, on the fat ends of the engines, are “air scoops” mimicking those fitted to high-performance motors.

Actually, another trompe l’oeil touch is the HM9 Flow’s calibre itself, which may appear to be three separate pieces housed within the pair of jet engines and the fuselage, but is actually connected together via a main plate.

The HM9 Flow’s case is also as clever as it is difficult to produce; its extreme curves and acute angles actually required new manufacturing standards and techniques. In fact, when MB&F took the HM9’s designs to its manufacturing partners, the response was these could not be done, no thanks to some of the case’s deep recesses. Compounding things further were that the steep curves are paired with slim bands of mirror polish and wider swaths of satin finish. This rendered some finishing tools unusable.

But MB&F refused to alter the placement of the different finishes in order to accommodate the finishing tools — doing so, the company says, “would have diminished the full-volume aesthetic of the HM9.” In the end, it was the manufacturing techniques that had to evolve.

Still, devising new finishing methods were just some of challenges. The alternating conical shapes of the jet engines and the fuselage of the HM9 Flow’s case also made it impossible to install the movement by conventional means. The solution was to cut the case in three segments so that the in-house, hand-wound, 44-jewel calibre (which has a 45-power reserve courtesy of a single barrel) could be inserted. However, this created another problem — water resistance. To address this a three-dimensional gasket had to be created.

Little wonder the HM9 Flow required three years of development. But then, that only seems a reasonable wait for a true horological machine.