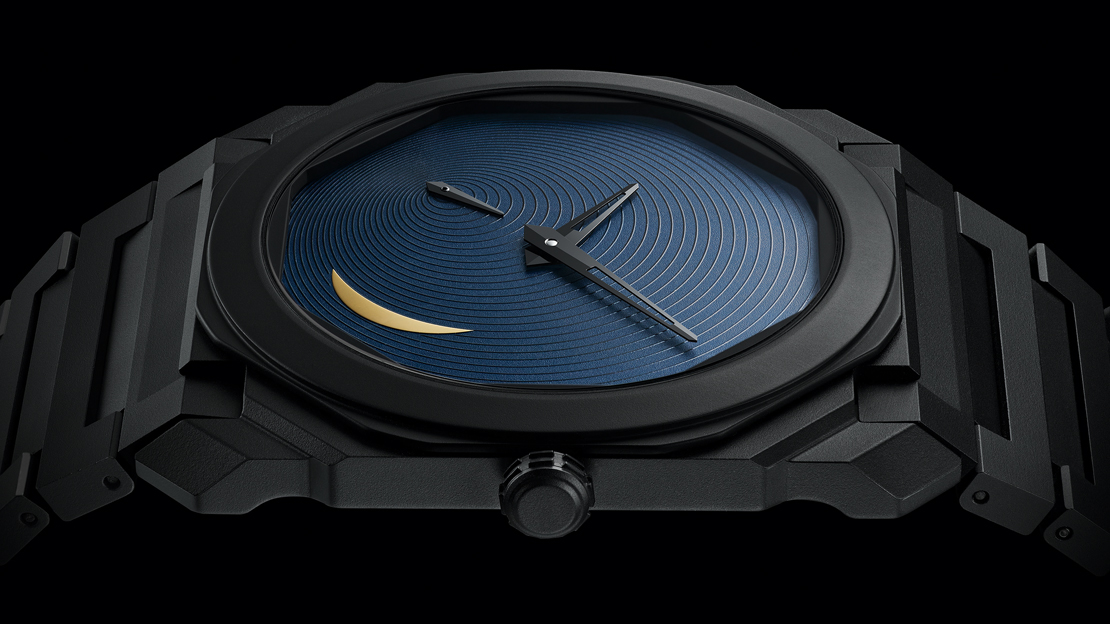 To the casual observer, this Bvlgari appears understated and low-key – the antithesis of a tool watch which puts a premium on legibility. Come to think of it, the Octo Finissimo Tadao Ando is not a fashion watch either – at least not in the conventional sense. It doesn’t overtly draw attention to itself and revel in its luxury.

Bvlgari even allowed, nay, encouraged the noted Japanese architect who lent his passion, creativity, and design ethos to the timepiece, to dispense with affixing not only indices but the Bvlgari logo itself onto the blue lacquered dial. We’ll get to that later.

The 160-example run of the collaboration with Tadao Ando is powered by the ultra-thin (record-breaking-thin, actually) Calibre BVL 138 with micro-rotor. The movement boasts 36 jewels and reserve power of 60 hours. A 40-mm black sandblasted ceramic case, bezel and crown, form the exoskeleton of the watch. Flip it over to reveal a transparent caseback with a laser-engraved signature of Ando. And if you’re wondering, yes, there is a Bvlgari logo there (a couple, in fact).

The watch will keep its place on the wrist with a black ceramic bracelet with ceramic triple black folding clasp – sandblasted as well.

The big story, of course, is in the dial.

The Tadao Ando is a conversation starter – even if that conversation may be with yourself. Now we’re not being cute here. It’s just that there are many levels of discovery you might have with this watch.

Upon the lacquered dial, which appears as an early-evening sky with stars, a glossy line emanates and uncoils from the base of the seconds hand. A gold crescent moon is fixed at the five o’clock position. “In two essential graphic elements, Tadao Ando expresses his vision of time on a watch made from black ceramic,” said Bvlgari in a release.

There are more scientific or philosophical musings to be done as you behold the watch.

Bvlgari Managing Director Antoine Pin, in a recent discussion with media, spoke of how the watch evokes a black hole, where “time does not exist.” The dichotomy is truly captivating, and taking in the clean tableau of the dial on serves to magnify the simple message of time whenever one glances at it. The hour and minute hands also seem to be floating (resisting?) the “vortex” that is trying to suck it in.

The Ando is a perfect springboard for further philosophical discussions to Pin in a bid to explain the project and, truly, Bvlgari as a whole. While it’s true that function creates design, for Italians the causality isn’t as simple or obvious. Remember that Leonardo Da Vinci is equally known for his inventions and art, Pin averred.

For the company’s creative director Fabrizio Buonamassa, it was about leveraging the vision of Ando to amplify a message. Surely, it was not about forcing distinct or traditional Japanese elements because, well, it’s Bvlgari. And we must add that it might looked contrived or even kitschy.

Back to the fact that this timepiece has dispensed with any logo or indices on the dial, Buonamassa said with a smile that Ando was too polite to even bring it up when he was designing the dial. The Bvlgari director wouldn’t hear of it, and so these were lopped off.

There was no time for that.