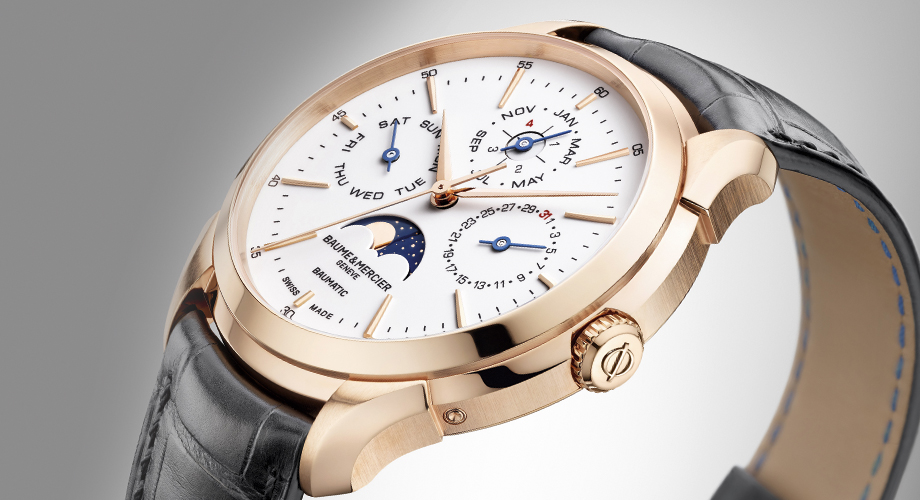 NOT that Baume & Mercier wasn’t being busy. It just seems like the brand’s best bits somehow get lost in the din of new-this and new-that on social media horology. Consider, though; Baume & Mercier in recent years has released compelling produce like its Clifton 1830 Manual (2013), Clifton 1892 Tourbillon Volant (2014), Clifton Reserve de Marche 8 jours “185 years” (2015) and the Clifton Pocket Watch 5 Minutes Repeater “185 years” (2015). No fluff, these.

Certainly as significant is the watchmaker’s release in early 2018 of its new Baumatic BM12-1975A self-winding movement, which was developed by ValFleurier — Baume & Mercier’s stablemate in the Richemont Group. The calibre was the first within Richemont Group to get a balance spring, anchor and escapement wheel collectively in silicon. This not only extends the calibre’s service intervals (as long as seven years because it does not rely all that much on lubes), but also allows it resistance to magnetic fields of up to 1,500 gauss. The calibre also boasts of a five-day power reserve (from a single mainspring barrel) and can be adjusted to a COSC-level accuracy rate. The BM12-1975A debuted within the Clifton Baumatic collection.

This year Baume & Mercier has added a new piece to the collection in the form of the Clifton Baumatic Perpetual Calendar. Guess the brand is dead set at extending its streak of horologic niceties

As its name declares, the Clifton Baumatic Perpetual Calendar still relies on the Baumatic movement, this time around in cal. BM13-1975AC-1 form. While getting the silicon bits of the base calibre, as well as its 28,800vph beat rate and five-day power reserve, the cal. BM13-1975AC-1 is also paired with a Dubois-Depraz 55102 module piggybacking on it — this takes care of the perpetual calendar function.

Seen through the sapphire crystal window on the caseback are the calibre’s snailing, graining and Genevan striping décor on the bridges, plate and rotor.

Now, like any proper perpetual calendar, the one fitted to the Clifton Baumatic reads out the date, day of the week, month and the phases of the moon while “knowing” which months have 30 or 31 days, and even the years during which February throws a tantrum and adds an extra day to its usual 28 days. Expectedly, too, the Clifton Baumatic Perpetual Calendar, assuming regular use, won’t need to have its date corrected until March 1, 2100 rolls around — an end-of-century year which by Gregorian calendar computation will not qualify as a leap year.

On the dial of the Clifton Baumatic Perpetual Calendar, the displays for this complication is as romantic. Set over a landscape of “warm white” porcelain finish are four “subdials”— the resulting layout is well-balanced. The one at 12 o’clock is assigned to the month and leap year indications, at 3 o’clock is the date, at 6 o’clock is the moonphase (and brand inscriptions), at 9 o’clock is the day. Blued hands, gilt applied indices and simple markings complete the watch’s dial furniture. All very classical, all very tasteful.

Housing all this is a satin-finished, 42-millimeter-wide, 12.1-millimeter-thick case made from 18-karat red gold (over which sits a domed sapphire crystal cover). Some fancy curved lugs and a crown almost completely recessed, if not for a cutout in the case, add further flair into the Clifton Baumatic Perpetual Calendar’s design. The black alligator leather strap supplied with the watch can easily be changed without using a tool.

Clearly, this watch, if not Baume & Mercier altogether, is a great piece worthy of attention.