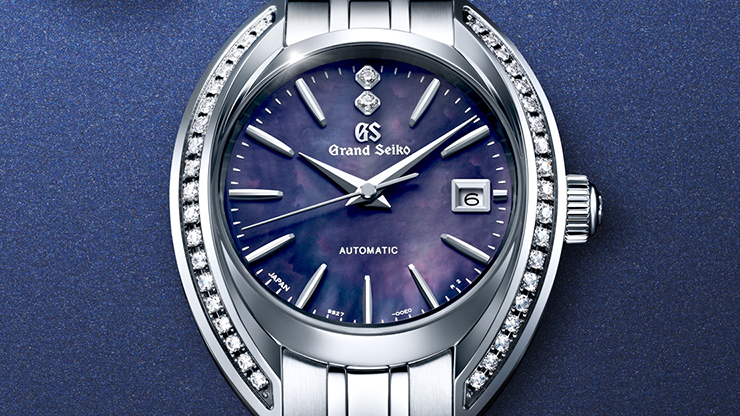 IT HAS only been around three months or so since Grand Seiko gifted the ladies with five new timepieces from its Elegance collection. Now what’s significant about those releases was that the watches were all powered by Grand Seiko’s new self-winding cal. 9S27, which though not explicitly called a ladies’ watch calibre, is quite suitable for such timepieces.

It measures only 19.4 millimeters across and 4.49 millimeters thick. This means the movement can be slotted within the svelte cases defining Grand Seiko’s new line of ladies’ watches. And the brand is now propping up this argument further by adding two new models to the Elegance collection. The new ones are fancy one, too.

Grand Seiko says the new Elegance pair channels the spirit of its iconic 62GS from 1967 — the brand’s first automatic piece which, incidentally, it honored at Baselworld 2015 by putting out a few faithful recreations of the original watch. In the new Elegance watches, the most obvious nod to the original — all right, not exactly that noticeable, considering the 62GS’s masculinity — is its bezel-less case. In both the 62GS and the Elegance watches, the domed crystals attach directly to the sides of the case.

Frankly, the touch is not so pronounced in the two Elegance watches because of the fancy way by which their cases wrap around the dial. However, it inarguably tidies up the watches’ lines by eliminating an element (the bezel) which could have likely disrupted the organic, flowing contours of the case. Unmissably adding a further touch of whimsy are the two rows of diamond-studded arcs which appear like bridge trusses, only these are curvy and quite graceful. These two elements span the length of the watch, punctuating near the edge of the lugs.

Of course, as a Grand Seiko, the case is hand-polished to a Zaratsu shine, so it catches light the way diamonds do. Thirty-eight diamonds line it.

Differentiating the two latest Elegance pieces are their dials. One wears a silver-colored dial (the ref. STGK 011) while the other flaunts a mother-of-pearl one that is rendered in a deep purple color Grand Seiko says is known as “Koki-murasaki” (STGK 013). Apparently, this color connotes high social status in ancient Japan. Regardless of dial choice, the furniture laid out over it is the same.

A pair of diamonds sit at 12 o’clock. Then the crispness of the hour markers, as well as that of hour, minute and second hands, contrasts with the flowing lines and soft contours of the case.

For starters, it is built, assembled and adjusted, all by hand, at Grand Seiko’s famed Shizukuishi Watch Studio in northern Japan. So its craftsmanship and construction are just like those in any Grand Seiko movement. It is also fitted with a balance spring made from the latest Spron 610 alloy. Its pallet fork and escapement wheel are built by MEMS Engineering, a leading maker of silicon bits. The watch within which it eventually slots then undergoes 17 days of demanding tests. Beating at 28,800vph, the cal. 9S27 has a 50-hour power reserve and is accurate to within +8 or -3 seconds a day. And, as can be seen through a sapphire crystal cover on the caseback, this calibre is as lushly decorated as any mechanical movement from Grand Seiko.

The ladies deserve nothing less.