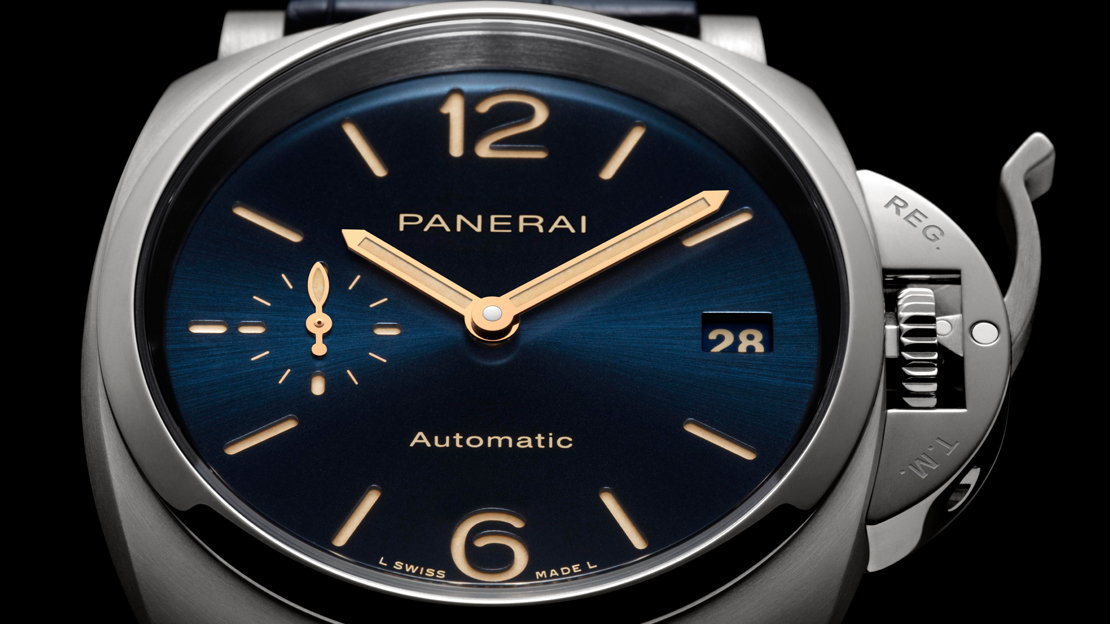 THE slim set in Officine Panerai’s range has just been beefed up — in terms of choices, that is. Six new pieces in three sizes, three case materials and two dial colors define the additions to the Panerai Luminor Due, the watchmaker’s stylishly svelte models which last year even debuted a 38-millimeter piece. Expanding the variety with which any of these new models can be worn is an innovative quick-change feature for the watches’ straps.

All the new Luminor Due models are ticked by self-winding movements. Unlike most of their “tool”-like dive-watch brethren, these watches only manage 30 meters of water-resistance rating.

Among the three titanium models, it’s the PAM 926 and PAM 927 that are identical; except that the former is a 38-millimeter piece, the latter a 42- millimeter. Their cushion cases and crown protectors, in brushed finish, are paired with “sandwich” dials in sunray blue featuring Arabic numerals and hour indices, hands and small second subdial markings in beige. Most of the furniture are coated in SuperLuminova that glows green in the dark. Both models get date windows and alligator leather straps in blue with beige stitching.

Powering this pair is the in-house cal. P.900 which oscillates at 28,800vph and has 171 components, 23 of which are jewels. It extracts 72 hours’ worth of power from a single mainspring barrel. It is also protected by an Incabloc anti-shock system.

The third titanium Luminor Due, the PAM 964, is housed in a 45-millimeter case, also in brushed finish, and which is paired with a blue leather strap with beige stitching. Marking this piece is a busier sandwich dial (although also in blue sunray). This is because a power reserve meter now resides at a spot near 4 o’clock and 5 o’clock, and its small second subdial doubles as a day/night indicator for the watch’s GMT complication. The date window remains. And, yes, an arrow-tipped GMT hand joins the hour and minute hands. All its dial furniture are in beige, most of which coated with SuperLuminova.

A GMT function means a different self-winding movement, the in-house cal. P.4002, ticks within the PAM 964. The cal. P.4002, because of its GMT complication, has more components — 288, counting in 31 jewels and a pair of mainspring barrels (also good for 72 hours). It is fitted with KIF Parechoc anti-shock and a balance made from Glucydur, an alloy of beryllium, copper and iron that resists temperature changes better. The movement has an off-center micro-rotor that can wind the springs from either direction. Suitably, this touch of horologic hubris is displayed on a sapphire crystal window on the watch’s caseback.

Now while the PAM 1043 and PAM 1045 both have 38-millimeter cases, these differ in construction. The PAM 1043 has one made of steel, the PAM 1045 has its fashioned from Goldtech. For its part, the PAM 1046 also wears a steel case, though one measuring 42 millimeters wide. Like the PAM 964, this watch gets a sapphire crystal caseback (the four other pieces have solid casebacks, on which engraved is the Luminor Due logo).

On top of their white dials are beige numerals and markers, some of which thinly outlined with black. The PAM 1046 gets a touch of gilt on its hour and minute hands, improving legibility. All get date windows, all are powered by the cal. P.900, too.

Though each of the PAM 1043, PAM 1045 and PAM 1046 is assigned with taupe, red and brown leather straps, the quick-release feature encourages constant changes of these, which would most often than not depend on wardrobe and occasion.

Remember, the Luminor Due is the fashionably slim model in the house of Panerai.