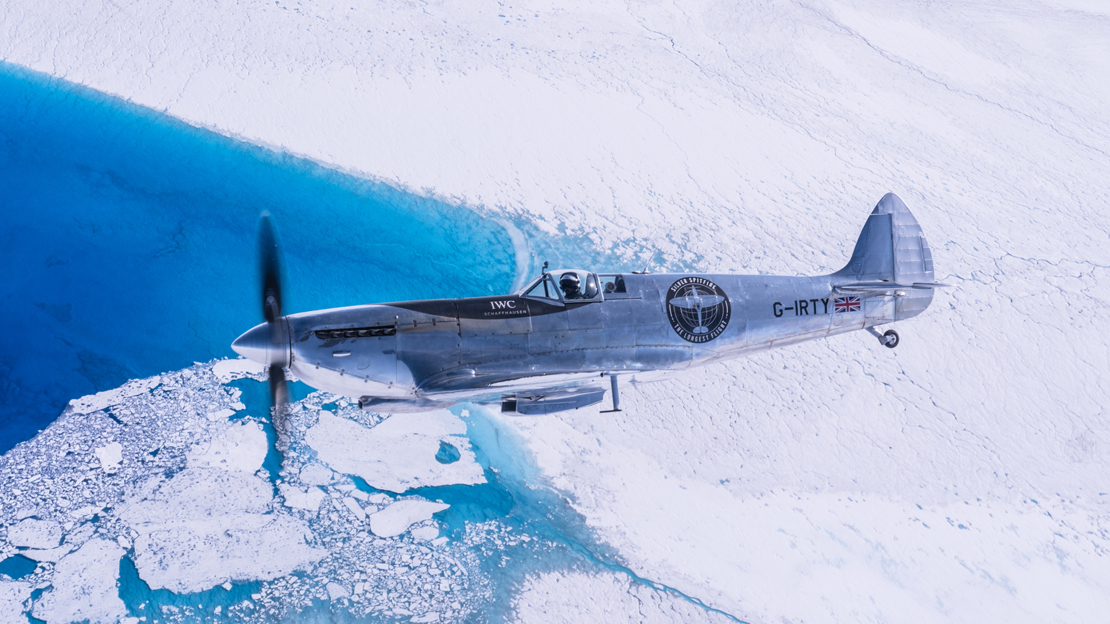 IF THE schedule holds the Silver Spitfire on Saturday will be landing at Mojave Air & Space Port in California, having taken off from Santa Monica, where it arrived two days earlier. At Mojave, the fully restored Vickers Supermarine Spitfire Mk. IX, built in England in 1943, will have landed and departed from 24 air strips, counting in Chichester in Goodwood, England, where its journey began in early August.

From Goodwood the Spitfire made its way to Iceland, where it was held up by bad weather. It then took off for Greenland.

“Flying our stunning Spitfire across the vast expanse of Greenland’s Ice Cap was quite simply awe inspiring. The weather was picture-perfect and the support crew managed to take some truly remarkable photos, showcasing the wild beauty of the scenery and the polished splendor of our iconic aircraft,” said Jones.

He continued they got busy in the next couple of days as they made the most of favorable conditions going toward the northern tip of Canada.

“Unfortunately, our luck turned slightly at that point, and we were grounded for a few days with some issues, including a tire blow-out and poor weather,” Jones said.

“As soon as the conditions improved, however, we were on our way, pushing hard to make up for time lost. Flying over 1,000 miles over five hours to Gatineau, Ottawa, we were thrilled to put our feet up for a few days with Vintage Wings of Canada, who looked after us superbly. As we relaxed for a spell, the Spitfire underwent her first full check, which takes place after every 25 hours of flying time to make sure everything is running smoothly,” he said.

From there the Silver Spitfire flew to the US just as the journey entered its third week.

“With G-IRTY emerging from her check-up with flying colors, we pressed on — all the way to New York. Flying down the Hudson River at 1,000 feet, with the Manhattan skyline and the Statue of Liberty in the background, was just incredible. It felt a little surreal to be honest, and it’s hard to believe we actually did it. What a moment!” said Boultbee Brooks.

According to the flight plan, the Silver Spitfire will next travel to Russia, then Japan, before passing across other Asian places like Taiwan, Hong Kong, Vietnam, Thailand, Myanmar, Bangladesh, India, Pakistan and several countries in the Middle East. It comes back to Europe via Greece. From Greece it heads toward Italy, France, Switzerland, Germany, Holland, circles back to France, then finally returning to the UK. The plane is expected to land on 87 air strips along the way.

To keep track of the different time zones during the flight, Jones and Boultbee Brooks will rely on both modern regulated instruments — computers — and romantic mechanical contraptions that would function no matter what, i.e., the IWC Pilot’s Watch Timezoner Spitfire Edition “The Longest Flight”. This piece can be set to a different time zone by simply turning its bezel to the desired location.

As pilot’s watches go, this one is built for long-haul flights.