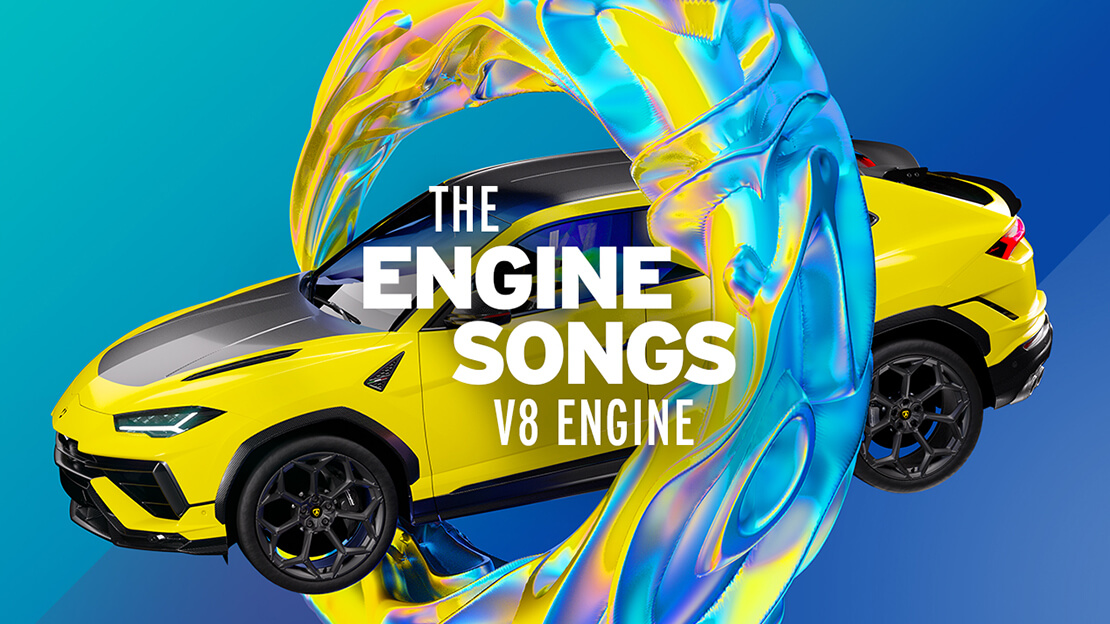 Deep, and rhythmical: that is the sound of the Lamborghini V8 engine as described by Alex Trecarichi and Mauro Mautone, internationally-renowned music producer and Lamborghini NHV whole vehicle coordinator respectively, when they unveiled the third The Engine Songs V8 compilation, inspired this time by the sonorous pounding of Urus Performante.

“The deep sound of drums: that is the instrument that more than any other represents the combustion effect of the V8 and emphasizes the movement of the pistons inside the cylinders,” explained Mautone, starring together with Trecarichi in the third episode of The Engine Songs: Let’s Talk V8 video interviews.

Following the launch on Spotify of the two playlists that harmonize with the V12 and V10 engines of Aventador LP 780-4 Ultimae and Huracán Tecnica on Spotify, the musical celebration of Lamborghini internal combustion engines continues with a new V8 chapter, inspired this time by sounds able to emerge from even the lowest revs. The Urus delivers explosive torque as early as 2,000 rpm with its kettledrum and bass drum sounds that pound incessantly and increasingly as the speed crescendos.

“To create the playlist, as always I started from the analysis of the basic frequency of the engine,” explained Trecarichi, creator of the trilogy The Engine Songs together with the Lamborghini sound engineers. “In the case of Urus, the parameter that returned was 50 hertz, matching the essential vibrations of drums. So, an important portion of the playlist had to be represented by rhythm.”

By once again applying the formulas of the Fourier Transform and with the help of artificial intelligence, the three expressive stages of the Urus 8-cylinder engine (idle, cruise and top speed) once more found their corresponding sound in a total of 24 tracks to listen to while accelerating, downshifting, curving and braking, augmenting the driver’s feelings of engagement and reward that are studied down to the smallest detail when designing Lamborghini engines.

When idling, the Urus Performante engine sings in C, the same tonality as the electric salsa of Un gitano perdido by Gabriel Dominguez. At 4,000 rpm, the vibrations match G, from which the soul of Boogie Fever is unleashed. At 7,000 rpm, the syncopated D SHARP of White Lies and their Is my love enough? rises.

It is a marriage between engine and music that once again with the V8 The Engine Songs is interpreted according to the principles of psychoacoustics: the science that bridges suggestive emotion and sound physics to transform the experience behind the wheel into emotion and imagination.

“Driving Urus Performante with The Engine Songs playing in the background makes you want to travel northward without a precise destination,” said Trecarichi, with his imagination wandering.

“I, on the other hand, imagined a rally track deep in the interior of the United States, having fun at the wheel with my best friends,” concluded Mautone.

The new Performante version of Urus has become a point of reference in its segment thanks to the setting the record for standard production SUVs on the Pikes Peak route in Colorado, posting the time of 10:32:064: 17 seconds less than that of the previous record holder.

On show in its dynamic guise for the first time on October 20 at the Vallelunga racetrack in Rome, with its power raised to 666 CV and reduced in weight overall, it offers the best weight-to-power ration in the segment. It develops 850 Nm of torque at just 2,300 rpm, accelerate from 0 to 100 km/h in 3.3 seconds and reach a top speed of 306 km/h.

Click here to listen to the playlist The Engine Songs: V8.