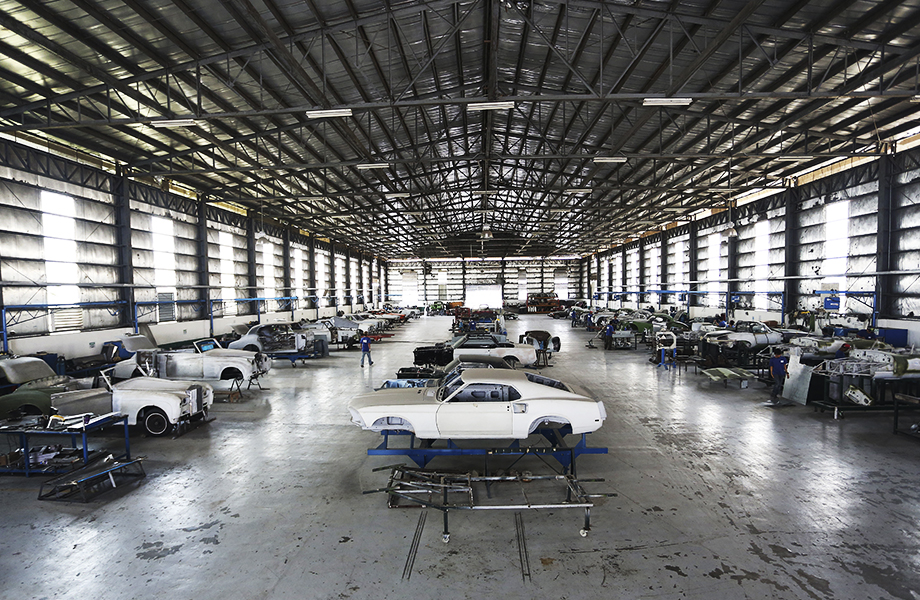 In this case it was a trio of classic Jaguar bodies sitting on stands. Raw metal shapes, amazingly accurate replicas of the originals and every bit as visually bewitching as a full car. More so perhaps because you see the beauty of the design unadulterated by anything else. I just stood there for a while.

I had to tear myself away though. There were other things to see and stand in front of. Classic shapes of Mercedes, Ferrari, MG, Porsche and more were all over the place in various states of completion. Most were the originals, and many were surprisingly in batches. Multiple colors of old 190 SLs for example, you would say they looked right off the showroom floor from decades ago but you would be wrong. They are somehow… better.

We aren’t in any of the auto museums we regularly visit in Europe, we aren’t in the classics departments in Stuttgart or Munich or Maranello. We are in the massive facilities of the Byrnes Motor Trust Restoration, just a quick and excited drive away from the Clark International Speedway in the Philippines. It is considered the largest operational car restoration facility in the world. And it is awesome.

The name comes from Australian businessman and serious car enthusiast Jim Byrnes. He has been in the industry for most of his life, and had the opportunity to start putting together a small collection with opportunity buys that soon became larger. After working and looking all over the world, he settled on putting up the restoration facility in the Clark Freeport Zone for reasons that include access to skilled and trainable labor, language and communications synergies, and the tax breaks from operating in a special economic zone. Cars are shipped in, lovingly restored, and shipped out. Most cars that have been worked on have been owned by Mr. Byrnes himself in the beginning, he would go out and buy batches of cars so that when the work was done there would be economies of scale (remember the multiple 190 SLs?). This is particularly important when they are producing and reproducing several pieces and parts and components such as body panels or grills or radiators or brake systems. The end result is they produce not just a one-off part meant to fit one car but a template of operation and production that can produce multiple pieces of relatively consistent quality, dimension, and tolerance. Also, by buying up whatever cars they could find in whatever state they were, they would end up with the paperwork of an original car, which would then be the basis for a ground-up restoration or full production. This in turn means that we, the gearhead public, can see these works of art driving down the road or at a racetrack more than ever. The originals in such proper form are becoming increasingly too valuable to allow such risks. And as much as I swooned over the sight of the three raw metal bodies of the vintage Jaguar racecars, imagine what it would be like to see all three in pristine condition and taking a curve on a nearby track.

The cars themselves are beautiful, even in an unfinished state. But the real accomplishment of BMT Restoration may be the community of skilled and committed people that make up the crew.

This whole thing is a labor of love, but not just of one person. The classic and vintage car industry and the related restorers and suppliers are generally there because of true love. The ability to surround yourself in this love, and to build an operation that would grow to be the largest in the world, was too much to resist for people like Jason and Sarah Lemberg. Jason was a key individual in the industry even before BMT, working at such prestigious companies as Symbolic Motors in San Diego. Sarah was involved with museums such as the Smithsonians and other large global brands and luxury industries. Moving to BMT Restorations in the Philippines, they feel, allowed them to take what they love to a whole new level, creating not just an operation that would put these wonderful cars back on the road but also one that would create an atmosphere that would ensure their future. One of the things they are most looking forward to is creating training programs and indeed schools for the different arts and crafts that are needed for these and other restorations and maintenance efforts. These institutions have been dying out in other parts of the world, and they feel that the Philippine operation may well be the key to producing the people that produce the work. They currently have over two hundred workers, a mix of male and female, that are constantly learning and growing and moving up. When we drive up to their facility gates in some expensive collectible or new car we are testing at the nearby track, we are asked to bring the cars in so everyone can see them and see what modern luxury cars look like. In more ways than one, it is the modern cars that fall short by comparison. The lines aren’t as curvaceous, the unseen hinges aren’t as polished, the paint doesn’t glow as much. And that’s not them saying that, that’s us.

It is hard to choose what exactly is most enchanting at BMT Restoration, because you have so much going on at so many levels. You will see pipes being carefully shaped for exhausts and woods being bent for use in a wonderfully sculpted dash. There will be rows of recreated vintage parts and components, some of them mechanical aesthetic works of art in their own right, waiting to be installed into something new or old or a combination of both. Walk along a row and you will find a rusted body straight out of a barn beside panelwork that has been created for it and then end up at an example of the finished, rolling, roaring end result.

One of the things we always tell people is that we don’t really like to talk about things. We talk about the people and the passion and the drive behind everything. About the experiences we have and the sights we have seen and the journey that brings us along. So the cars are awesome, the people behind them are great. What may well be most important to the entire world is that generations from now someone will be able to look at these rolling works of art and see into a past they may not yet understand or appreciate. They will be inspired, they will be challenged, they will be enlightened. And because of the idea to create an infrastructure of education and training and nurturing that people like Jason want to produce, the passion and the ability and the skills and, yes, the cars will be able to live on.