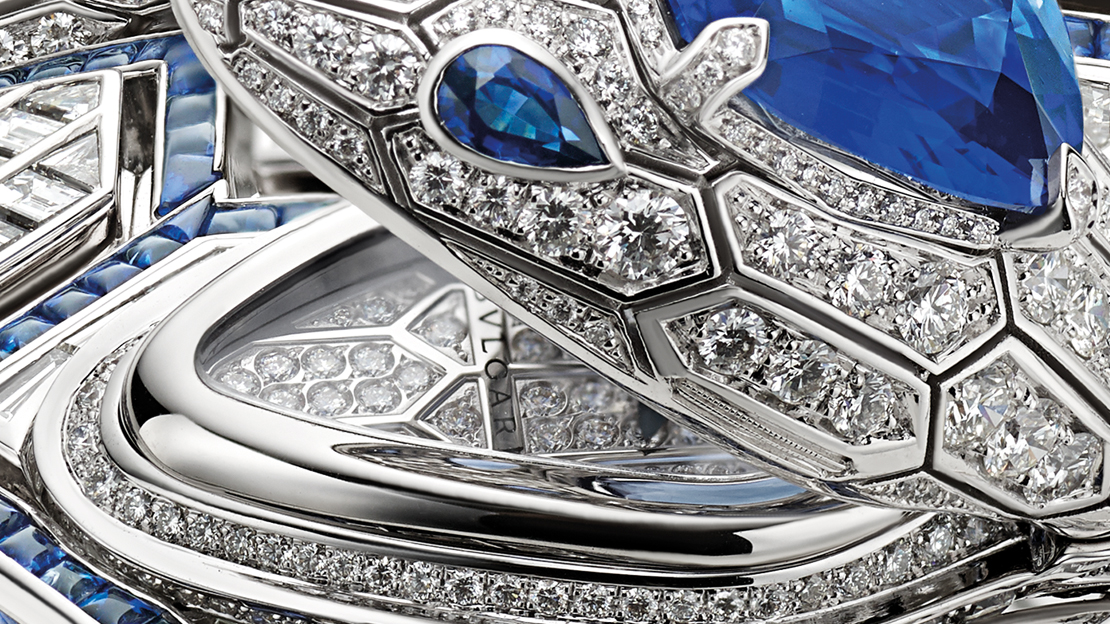 SOME “secrets” were bared at the Bvlgari Brand Event.

To be exact, six were revealed, all of which high-end “secret watches” (meaning their dials are all hidden from view). Typical for Bvlgari, these dials lie beneath bejeweled, shimmering, utterly stunning surfaces.

Three of the watches belong in the brand’s Serpenti collection, the other three in the Monete lineup. Both are iconic Bvlgari produce; the Serpenti is defined by snake forms, the Monete embraces ancient Roman coins.

Leading the recently exposed secrets is the Serpenti Misteriosi Romani, which Bvlgari prices at nearly two million euro. For the amount, one gets a one-off piece whose snakehead is crowned by a 10-carat Sri Lankan sapphire. The scales in the snake’s body is comprised of more than 60 carats of diamonds and 35 carats of sapphires.

There are more. The snake wraps around a sizeable cuff, which in turn is wrapped with more baguette-cut diamonds. And beneath the diamonds and sapphire is a structure in 18-karat white gold. The watch, revealed in the serpent’s mouth, is ticked by a Swiss quartz movement.

The two other snake-form secret watches are the Serpenti Misteriosi Intrecciati in rubies, and another in emeralds and sapphires.

Unveiled along with the Serpenti watches were the Monete timepieces. Defined by a recurring Bvlgari motif, the Monete relies on ancient coins to create a link between past and present, if not honor the brand’s classical Roman (and Greek) leanings. The Monete concept was conceived by Nicola Bvlgari in 1966, but the first Monete secret watches debuted in 2017 with the introduction of a model in Bvlgari’s Octo case, and another as a jewelry-style pendant.

These two designs have been reimagined for 2019.

The Octo Roma Monete with an extra-thin skeleton movement comes in rose gold or in platinum. The rose gold watch is fitted with a 2,000-year-old coin that has a relief of Emperor Constans, one of the three sons of Constantine the Great, who ruled Rome and the Western provinces of the Empire. Engraved on the reverse side of the coin is an image of Concordia, representing harmony, in which state the three brothers are said to have ruled together for years.

The Octo Roma Monete in platinum gets a different coin, but one which also depicts Emperor Constans. On its reverse side is a scene from the ruler’s victory celebration over the Franks, one of the highlights of his reign. As their names declare, both the rose gold and platinum Monete are housed in Bvlgari’s octagonal Octo case. They are sizeable at 44 millimeters across.

No quartz job beats beneath these watches. The Octo Roma Monete pair boasts of Bvlgari’s Finissimo Skeleton Flying Tourbillon cal. BVL 268 handwound movement. Only 1.95 millimeters’ thick, the movement has a sapphire baseplate and a tourbillon carriage mounted on ball bearings. Its 253 components include 11 jewels. It oscillates at 21,600vph and has a 52-hour power reserve. This is seriously innovative horology.

For its part, the Monete pendant watch is more pendant than watch (this one, like the Serpenti models, is a quartz). The piece is adorned by a 2nd-century coin depicting the head laureate of Apollo of Grynion on its face and the god Apollo on its reverse side.

The octagonal pendant is made of rose gold and suspended from a 90-centimeter solid-gold chain. The chain, and the watch bezel and dial, are set with elements made of hand-cut rubrum coral coming from Sardinia, as well as brilliant-cut diamonds.

Hard to keep this one a secret.

A chic collection from a brand known for its glamour and excellence.

A collaboration is always as exciting prospect.

March of this year is set to be a very dazzling and glamorous month, courtesy of the two jewellery shows that will happen in bustling and beautiful Hong Kong.

Glamour At The Golden Globes

The 77th Golden Globes can best be described as a night of glamour and extravagance to celebrate the best of the best in the television and film world.