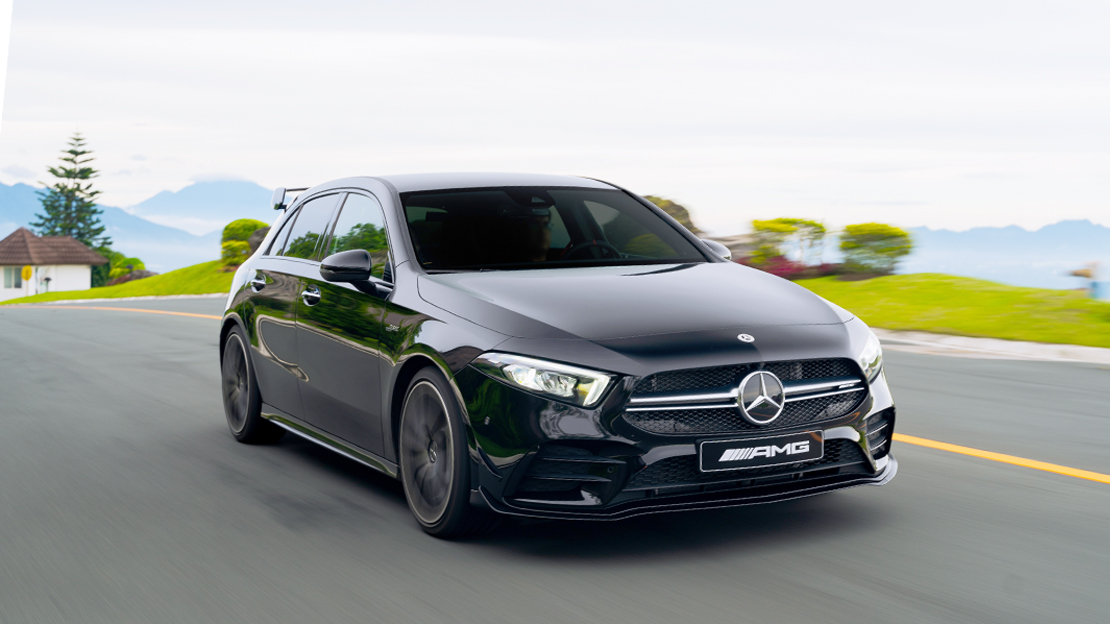 When you hear (and you usually used to hear the actual cars before you saw them) the initials AMG you usually think of a roaring fire-breathing dragon of a car. Large beasts that tend to dominate those around them. And that’s kind of where they started.

With something called the red pig. And just remember, wild pigs or boars in the Black Forest of Germany can be pretty ferocious.

The Red Pig (Rote Sau in German) was a car built from dreams. And dreams shattered. Mercedes-Benz withdrew from motorsports in 1965, and some Daimler-Benz engineers didn’t let that stop them from pursuing their dream of building Mercedes-Benz racing machines. Hans-Werner Aufrecht and his colleague Erhard Melcher (Both from Großaspach, Germany, see the initials?) found a 300SE they could strip and make a “little” bit more powerful (they were after all working on the 300 SE racing engine before the plug was pulled). Driver Manfred Shiek used it to win ten rounds of the 1965 German Touring Car Championship. They all had so much fun they quit their jobs and Mercedes-Benz and in 1967 started…AMG.

They sealed their place in motor racing history at the 1971 24 Hours of Spa, with their entry, a luxury-size AMG Mercedes 300 SEL 6.8, becoming class champion and second overall against lighter racecars.

Success built success. AMG moved from their hometown to a purpose-built workshop and office in Affalterbach in 1976. They became an engine manufacturer themselves in 1984 thanks to the development of a completely independent cylinder head with four valves per cylinder. They put the by-then infamous 5.0 Liter V8 into an E-Class Coupe which ended up being nicknamed “The Hammer” by enthusiasts worldwide. The fire-breathing persona was set in fiery stone.

In the late 80s, AMG started working directly with Daimler-Benz as official racing partners. The racing success of the 190, entered in DTM races by AMG with manufacturer support, brought home 50 victories between 1988 and 1993.

The Mercedes-Benz C53 AMG was unveiled in 1993, the first jointly-developed vehicle under a new contract entered a few years earlier. The same year, the German Patent office recognized the AMG name as a trademark.

There was still much growth to be had, and DaimlerChrysler AG took on majority stake in 1999 and then full ownership in 2005. This set the stage for even further growth on a much wider scale.

The fire-breathing dragons still exist, built by one engineer at a time. But the knowledge and passion behind them has expanded. AMG engineering, tuning and technology has produced award-winning streaks in the International Engine Of The Year Awards in Stuttgart, but these engines are now far more technologically-advanced while also being more flexible and usable. And they continue to advance.

We drove four different Mercedes-AMG models of four different interpretations of the original passion recently. None of them were the handfuls that the older cars were, and all were better vehicles and quicker round the roads as well. Yet each had it’s own character, and it is definitely clear that Mercedes-AMG still uses technology at its best.

The old school cars were a CLS 63 and a CLS 55, and they were perfect examples of what most people wanted from the AMG badge for their time. They have huge powerful emotional engines under the long hoods, and a blip of the throttle delivers huge amounts of both thrust and thunder. Yet these cars are really more luxury Grand Tourers than anything else. All the bells and whistles of the time, all the power and all the street cred but with the highest possible levels of smoothness, comfort and quiet. What is there more to want?

The new cars answer that. We drove the Mercedes-AMG GLA 45 and the new AMG-Mercedes-AMG A 35 4Matic, both of which are cars that benefit from both AMG tubing and the more modern automotive infrastructure of the big marque. The engines are smaller, lighter and tighter, which allows the body shells around them to be more efficiently created. They are not the old-school “one man, one engine” cars but they come within half a second of their times. With better handling, better environmental numbers and more modern safety systems. And, with the A35, a surprising amount of comfort.

The GLA 45 4Matic was a car from the previous generation and previous era of technology really. It took advantage of primarily-front drive architecture for packaging and development while putting in the multiple award-winning turbocharged two-liter engine and AMG Speedshift DCT 7g tuned for fun and the 4Matic all wheel drive system for stability. This made it the smallest crossover of the family with the most powerful engine it could have. The GLA 45 was fun, powerful and easy to toss around on quick mountain roads while still being stable on the high speed of highways. An excellent example of the best of the technology of its time.

What I came away with was that it gave me the feel of what AMG wanted but in a more modern more intelligent interpretation. What I felt it could have used though were mainly two things. If you wanted the car a bit more comfortable, you could use a suspension more tuned for comfort. If you wanted to push the car harder, you could use a suspension tuned more for dynamic response. All in all though, a good middle ground.

So guess what they answered, pretty much spot on, with the Mercedes-AMG A 35 4Matic? Exactly that, and more. Because of the ability to choose the driving modes, the new car can now be more compliant or more dynamic as you wish it. Do not expect the cosseted luxury of the big Mercedes sedans, but do expect a much better than previous level of comfort. The 2-liter turbo is still mated to the AMG Speedshift DCT 7G, and they are all still tuned more for fun than anything else, and they also produce quicker acceleration times than the previous generation. Steering is playful and precise but not demanding. As it is primarily putting power to the front wheels, you have great grip and quite good pointability with rear wheels coming in as needed.

There is still a bit of rawness in the A 35, in that you will get an emotional blip when you give it a throttle one. It is a shorter car than the big sedans, and that has an effect on smoothness sometimes but you compensate by having some pretty nice flickability and the ability to put power down both smoothly and quickly.

Basically the A 35 is an example of AMG for the next generation, using the latest technology as demanded by the latest crop of enthusiasts. But modern enthusiasts don’t necessarily want the huge engines of the past. The fact that this two liter single turbo inline four A35 accelerates to a hundred km/h within a half second of the V8 biturbo CLS 63 says a lot. And if you want to get serious, guess which one will probably carry that speed out of a corner better?

I once drove some serious AMG sportscar metal in the form of the SLR on track at Paul Ricard. It was the quickest off the line of anything there and we could pass 300 km/h on the long stretch. It was however a handful to hands trained below full-on racecar driver standards, especially once you hit the sweeping esses. This new generation of Mercedes-AMG cars may not be as loud or as raw, but they are more refined, more technologically-forward and more easily used in more situations for more people. In other words, more fun more easily.

Nice now to have a choice, the right knife for the right slice.

The Mercedes-AMG A 35: The Sporty Entry Point Into The AMG Lifestyle

The story of a legendary engine in the year of the V12, ahead of the hybrid model launch in 2023.