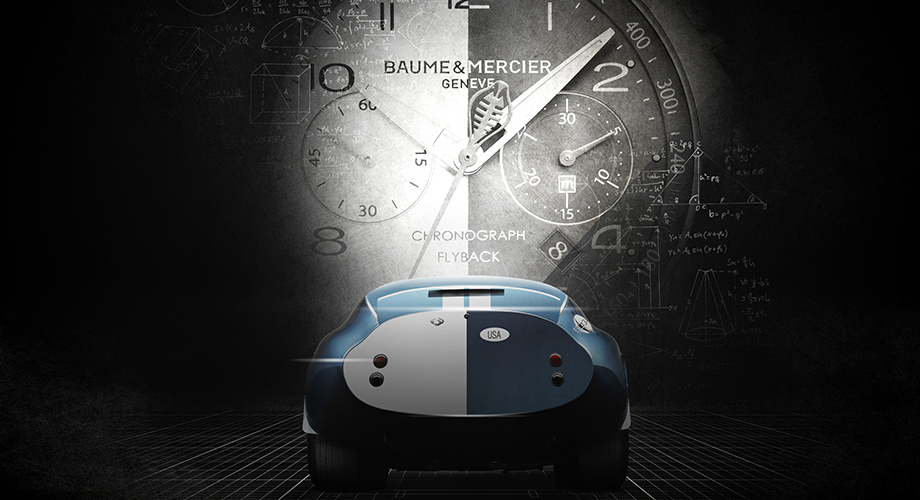 The watchmakers of Baume & Mercier have partnered with the Carroll Shelby Company, and they are issuing a watch that embodies the design sense of the great American race car, the Shelby Cobra Daytona Coupe.

Baume & Mercier’s bond with the Carroll Shelby Company began in 2015, a combination of the raw power of racing that Shelby brings to the racetrack, and the 187 years of design and refinement that Baume & Mercier has developed in their years – almost centuries – as a watchmaker. Baume & Mercier is one of the oldest watch companies in existence. Their history reaches back to before the Daytona Coupe raced on the track. Heck, it reaches back to before there were cars at all.

But one of the things about being great is that you realize you can learn from anyone; and that it always benefits you to keep doing new things. Baume & Mercier is old, but they’re far from static. They constantly find ways to renew their approach. They have been a classic men’s watch through the years, a beach-house-in-the-Hamptons kind of brand… in short, they have been as diverse as people usually are, a variety of things that catch your interest and get you invested.

I suppose that’s one of the benefits of being around for so long, whether you’re a watch company or an individual. You get to know who you are, but you’re also not afraid to change it up now and then. I’m not sure that this is what they intended from the beginning – 187 years ago – but that is kind of the point: maybe after 187 years, you learn to give yourself credit for knowing a little something, and you learn to trust your instincts. And now Baume & Mercier’s instincts have partnered them with one of the famous American racers, and putting out a wristwatch that embodies the qualities of that car.

THE CAR IN THE FORM OF A WATCH

The Clifton Club Shelby Cobra CSX2299 is a automatic chronograph with a 42-hour power reserve. It is a flyback chronograph, with a tachymeter scale and a date window at 4:30. The original car shines through in many of the watch’s design details. Car enthusiasts and watch fans alike will delight in the conversion of automobile to automatic watch.

The watch’s 44mm case body has sweeping lines, to replicate the ground-breaking design of the aerodynamic lines of the Daytona Coupe. The car’s livery of silver and blue is replicated in the colors of the dial choices for the wristwatch. The case sides hold the chronograph pushbuttons, which have been shaped to resemble the foot pedals of the Coupe. On the case band, the Cobra insignia and lines replicate the Daytona’s Cobra 289 engine. The vivid red on the chronograph seconds hand captures the Cobra logo. And on the watch’s back, the oscillating weight is a detailed recreation of the Daytona’s wheels.

THE FASTEST DESIGNER EVER, AND WE MEAN THAT IN EVERY WAY POSSIBLE

Peter Brock is a bit of an enigma. In many ways, our teenage-boy selves owe him a debt we can never ever repay, because he designed two cars that forever enshrine him in the Vault Of Guyhood. These were the Corvette Stingray and the Shelby Daytona Coupe. Take a moment and bow your head.

On the other hand, Peter Brock was not the most direct-to-the-point kind of guy. For example, he wanted to be a race car driver. And he decided that the way to achieve that goal was to begin a career in automotive design. That’s right: Peter Brock figured the way to the driver’s seat started with the stool in front of the draft table.

Now, I’m not in any way opposed to academic learning. I’m a huge fan of it. But this strikes me as, shall we say, an unusual way to muscle into the world of high-performance automobile racing. Remember the movie “Days Of Thunder” where Tom Cruise became a killer race driver without ever having any formal instruction, including getting a driver’s license or even learning how to drive a car? Peter Brock was like the opposite of that. He was, like, the best-informed-and educated race car driver the world had ever seen. And, as it turns out, all of us reaped the benefits of it.

He entered the Art Center College of Design in 1955 with a handful of car sketches. (Apparently he did the sketches right on the spot. Say what you will about Brock, he worked fast. As later history would reveal.) However, he also left school early (almost immediately, if you follow the timeline) to go to Detroit and follow his dream. He joined the General Motors design studio, the youngest designer in GM history. (He was just 19 years old, since he was born in 1936.) While he was there he did the sketch that would later be picked as the basis for the design of the 1963 Corvette Stingray. Bow your head again.

But he still wanted to RACE cars, not design them. So he moved back to California, bought a race car, and started working in a car shop. He overheard that race car champ and car manufacturer Carroll Shelby (again, the person) wanted to start a racing school. So Peter Brock introduced himself and volunteered to become Shelby’s first instructor. Brock was so eager to be a race car driver that he left out the fact that he was a car designer.

But, as it turns out, Shelby would discover that soon enough.

The first race that the Shelby Cobra Daytona Coupe ever won was against time. Believe it or not, the car went from design sketch to finished product in 90 days. To put that in perspective, some celebrity marriages don’t last that long. But it’s true, and here’s the story:

Brock, apparently willing to put on his former hat as car designer (and thank God), took on the job. Brock started working with Ken Miles, Shelby’s most important development engineer. The team sketched, and then built, the aerodynamic GT race car in just 90 days.

You build a car in 90 days, and you can rationally expect there to be a few bugs that will be revealed by testing. So they brought the Daytona Coupe to Shelby’s Riverside race track to run it out. After 20 laps, they had the verdict, which was delivered to Mr. Shelby: The Daytona Coupe was not only fast as lightning, it was stable as a rock, and beautifully poised. Ken Miles said it was ready to race, without a single modification.

The Shelby Daytona Coupe went on to prove him right. The car’s initial season saw it repeatedly in the winner’s circle. It won in its class at the 24-hour race at Le Mans, the first time an American car had won that grueling event. It clocked 196 mph at the Mulsanne straight. And it won America’s first GT class World Sportscar Championship, ending in a glorious 4th of July win at Reims on US Independence Day of 1965.

THE FUTURE MADE METAL

Peter Brock, the king of speed, gives his view on the car and the watch it inspired. “You can choose to be conservative, or strive to be an original. That’s the attitude we brought to the Clifton Club Shelby Cobra Limited Edition. Truly a chronograph unlike any other.”