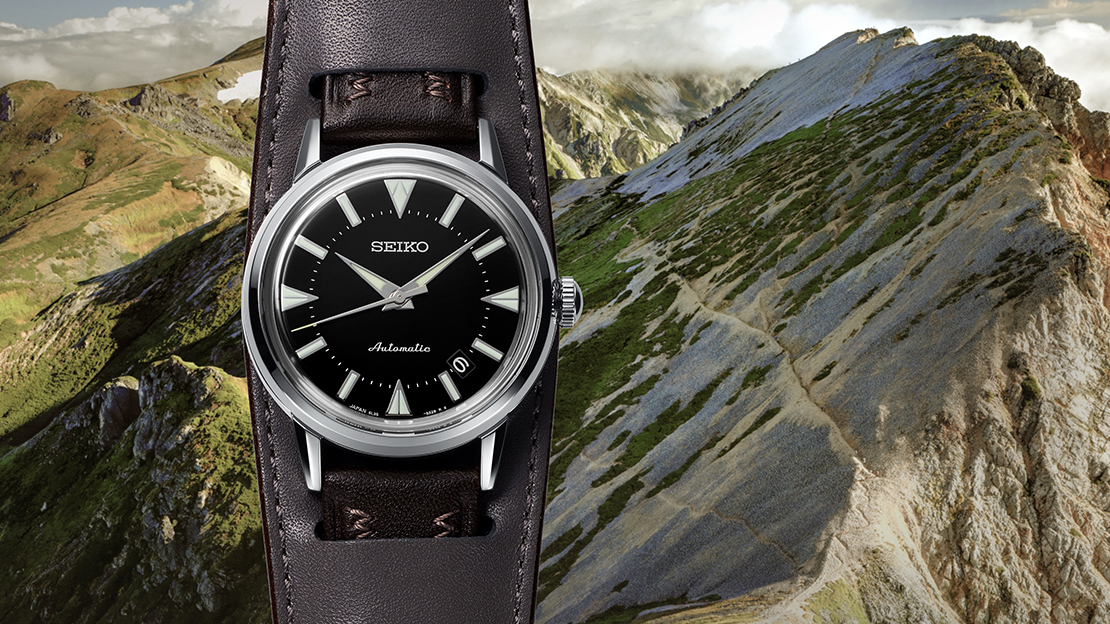 As it marks 14 decades of telling time, Seiko rediscovers a classic from its vaults and pays homage to it via two tracks. The Alpinist, widely considered to be the brand’s first-ever sports watch (introduced back in 1959), is breathed new life with a faithful recreation, plus a three-model reinterpretation.

When it first came out, the seminal timepiece was envisaged to accompany the wrists of mountain climbers and recreational field sports enthusiasts. Then called the Seiko Laurel Alpinist, the watch was distinguished by an oversized leather cuff band (designed to protect it from the sweat of exertion), and bore a screw-back case to keep out dust and sand. In a release, Seiko noted that “the indexes and the hour and minute hands all had luminous inserts ensuring high legibility in the dark, and the name Alpinist was evoked in the mountain-shaped markers at the three, six, nine, and 12 o’clock positions.”

Of course, these positions also call to mind east, west, south, and north in a compass, and the company says that many sports watches that came after took after the Alpinist’s pioneering cues.

Channeling 1959
Seiko tried to keep as faithful as possible to the original 1959 Alpinist – bringing back crucial features and details such as the large markers, the glossy black dial, and white minute markers. Indices and the hour and minute hands are bestowed Seiko’s dependable Lumibrite. Even the leather strap bears the same “jagged stitch” design as the original.

Seiko Prospex designer Takumi Kishino shared in an online press conference that he found a solitary black-and-white photo of the 1959 watch among internal company documents released in relation to its launch. Along with this he found original sketches and an actual unit of the timepiece. “It’s a very attractive watch, with a lot of attention to detail,” he said, and added that handwritten drawings, particularly of older models, bear subtle differences to how actual models are built. Thus, it is important when making recreations to “decipher how intentions are expressed in the form of a watch.”

The glass of the recreation is a box-shaped sapphire crystal that “recreates the gentle feel of the original watch’s characteristic domed glass,” reported Seiko. A modern movement, the Caliber 6L35 with a 45-hour power reserve, now beats within. And despite a much better heart (which also enables the addition of a date window on the 4:30 position), the case gets just a millimeter thicker. This recreation (SJE085J1) is limited to 1,959 units and will be available starting August this year.

Before we move on, Seiko Prospex says all this business about recreating and making modern interpretations is basically about balancing inheritance and evolution: Replicating the design of the original but swapping out latest technology where it matters. Still, the discipline of recreating legacy pieces is about paying homage not just to the design but also the people behind these.

Departing from the previous iterations (the most recent of which were unboxed in January last year), the reinterpretations do away with the rotating compass inner ring – making the watch a lot less complicated, lot more legible, and way more faithful. The 2020 SPB117, SBP119, and SPB121 (or Prospex Alpinists) had a diameter of 39.5mm; the SPB241J1, SPBJ243J1, and SPB245J1 (known as the 1959 Alpinist Modern Re-interpretation) measure 38mm.

When it executes modern interpretations, Seiko professes to “takes spirit of the original but updates it to fit the modern world. We allow ourselves the license to imagine what our predecessors would have done if they were with us today. We respect their ideas, and we bring them up to date.”

Of the Alpinist 1959 Modern Re-interpretation, the company said “The debt to its (original) is paid in full… It’s like looking at two children that clearly have the same parents but are very different from one another.”

The designers also allowed this “child” to have a pink gold-colored second ticker. Speaking of hands, the Seiko has nixed the cathedral hands in favor of more faithful Dauphine ones.

The good news is that these timepieces, equipped with a 6R35 movement with 70 hours of reserve power (viewable through its transparent caseback) will join the regular Seiko Prospex line. The, ahem, British Racing Green model gets a leather strap; the others come with a stainless steel bracelet.