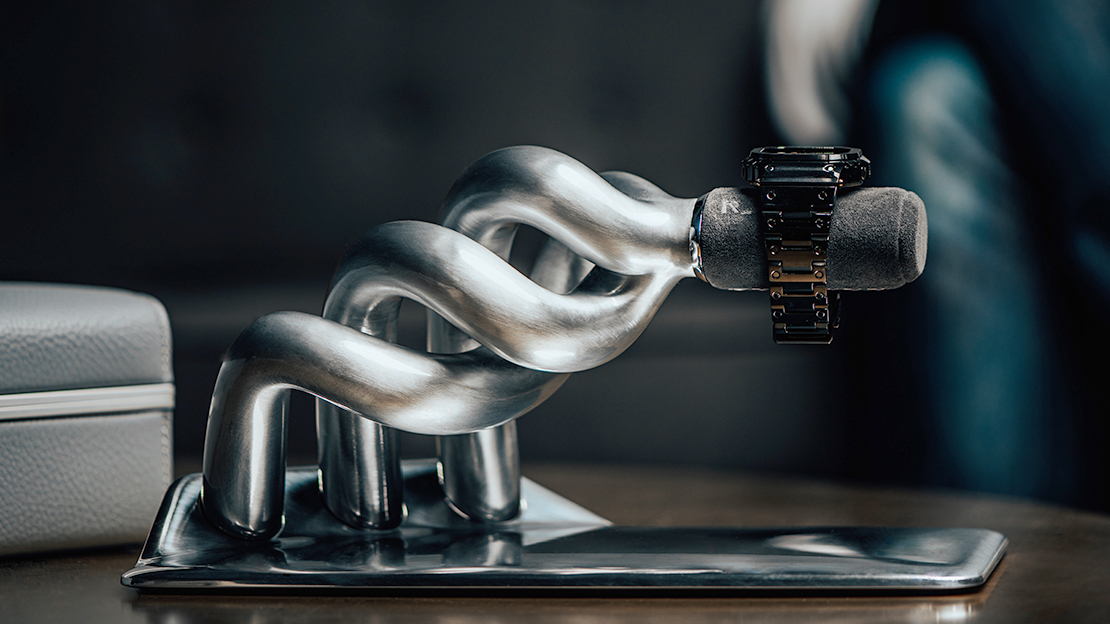 It is a curious sight to behold for the first time: A gleaming cantilever—polished, twisting tubes float over a flat plate. Not perfectly flat, upon closer inspection, but deliberately angled and curved. Every surface is immaculately finished to catch the light pleasingly. An automotive enthusiast would immediately recognize the shape, and wonder whether this is a repurposed car part. Is it a manifold? Is it a header? Is it big enough to be functional? But then he would notice the piece at the end of the three-into-one: It’s an oval block covered in black suede with white cross-stitching, an echo of performance car interiors. The purpose of this block is unmistakable: a wristwatch belongs here. Describing this sculpture any further seems inadequate, so I point you to the several thousands of words’ worth of photos. Yet even these visuals fail to convey the full experience –the heft, the tactility– of the actual piece

This is the R Werk TYP-01, a functional sculpture that is influenced by, and a celebration of, the twin passions of cars and watches. It is not an uncommon pairing —most Calibre readers also subscribe to C! — but it is rare that someone chooses to express these combined loves so tangibly. R Werk is the brainchild of Nelson Wu, an auto enthusiast and watch collector who spends a great deal of time ruminating on the nature of passion. Through an accumulation of experiences and conversations with luminaries in these two worlds, he has steadily added fuel to the spark of an idea that struck him years ago. In his words, the TYP-01 is a personal totem—an expression of a portion of himself. It also acts as a beacon to other similarly passionate individuals, bringing like minds together for friendship and collaboration. Lastly, TYP-01 is an aesthetic delight, whether it is taken on its own or as a symbol of the passions that led to it. The simple addition of your watch instantly transforms it into a piece with emotional weight of your own.

Led by Mohammad Morassafar in Pforzheim, Germany, the R Werk design team drew from multiple influences during the ideation and prototyping stages of the TYP-01. Most obvious is the Porsche 911, and particularly the 1973 Carrera RS 2.7, which Nelson considers to be the distilled essence of the 911. The supporting structure is modeled after racing headers from this motorsports legend, while the form of its ducktail spoiler is recalled on one corner of the base. Nelson has also been inspired by great personalities in the automotive world, such as the prolific designer Frank Stephenson, or his engineering hero, Gordon Murray. Touches of the former’s biomimicry are evident on this sculpture, but the latter’s clarity of focus and uncompromising nature inform the philosophy that underpins R Werk.

Although the TYP-01 has been shaped, in part, by the past, its construction is avant-grade. This can be surprising, as it appears almost monolithic at first glance. It is, in fact, as mechanically meticulous as its inspirations, combining several modern processes to carve, sinter, bend and fasten the metal together. The base plate is made from hydroformed steel, and it attaches to an upper portion (the “chassis”) that is machined from a zinc-aluminum alloy block using 5-axis CNC. The intricately organic pipes are also aluminum, but manufactured additively i.e. 3D printed. The block that carries the watch is upholstered in the same Alcantara as Porsche uses in its GT cars. Finally, the component parts are joined with bespoke titanium screws that will never be seen. Between the tight tolerances and the hours of hand-finishing, the TYP-01 impresses as a solid, single piece that was seemingly willed into existence.

R Werk is planning a production run of 399 pieces. Each TYP-01 will cost $3,850. This is the price of a serious wristwatch, which may give pause to some. However, when viewed in context of a larger collection, and the uncompromising, Swiss-like craftsmanship behind its creation, it makes more sense. As the TYP-01 name implies, it is the first project of this fledgling company. The journey from idea to production has been an education to Nelson and the team, and one with not a small amount of risk involved. R Werk hopes to find customers who are motivated by the same impulses, but any plan for a TYP-02 is still unwritten. Full disclosure: Nelson is a friend whom I met during a vintage Italian car event. While looking at an Alfa Romeo 1900 Super Sprint, and chatting about Tazio Nuvolari’s pre-war drives for Auto Union, we realized that we were both regulars at Red Bar Toronto, and had at least two interests in common.

The limited production restricts the number of people who can experience the TYP-01 first-hand, but any enthusiast can appreciate a passion project from afar. If you do have the means, and wonder whether this would make a fine addition to your office or garage, with your Royal Oak or Daytona resting upon it, consider the following: Does the feel of the metal transport you to another time and place? As your eyes trace the helical pipes, do you hear the soulful wail of a Flat-6 play on, as Abraham Lincoln put it, the mystic chords of memory? Does the softly refracted light move you to revisit your own journeys in pursuit of passion? If they do all this, then the TYP-01 might be an instrument that resonates with you.