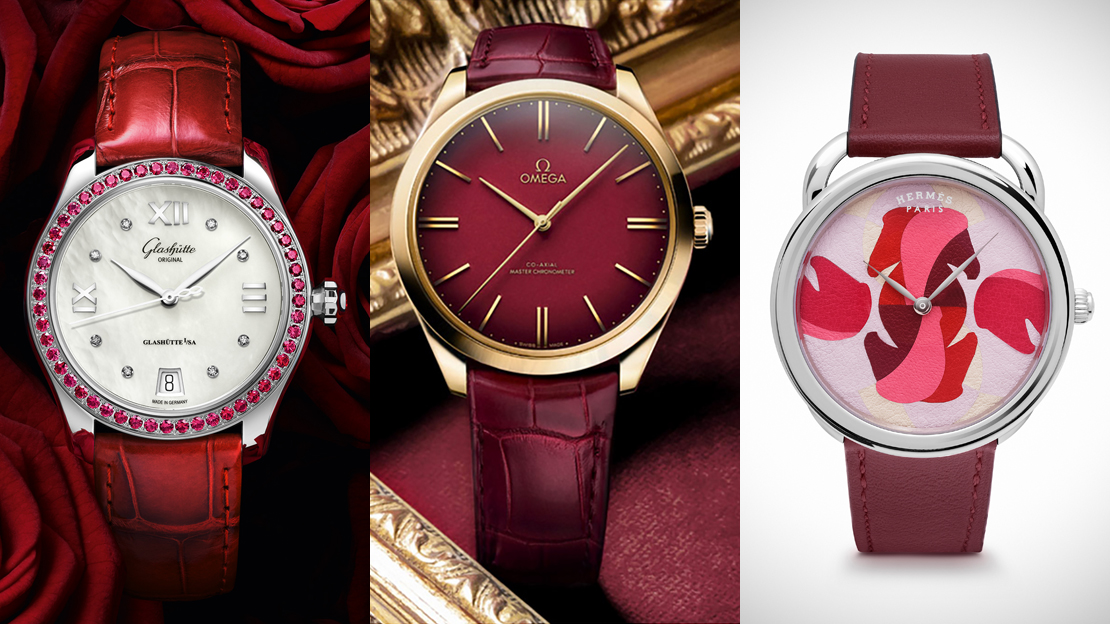 COMPLIMENT what she does. Send her roses just because. With apologies to the late James Ingram; why not go a step further and gift her with a special timepiece this Valentine’s Day? Here are three ways one may wish to go about this.

Omega De Ville Tresor 125th Anniversary Edition
Omega is marking this year its 125th anniversary with some suitably significant products, not to mention assembling from original components its legendary 19-ligne calibre. Among the new watches is the De Ville Tresor 125th Anniversary Edition, which debuts on an Omega a red enamel dial. Rendered in the same shade as the brand’s signature color, this stunning dial features slim, elongated baton indices — applied, of course — in yellow gold that droop toward the edge of the case, following the dome of the dial. Equally svelte hands, also gold, as well as gold inscriptions, polish the watch’s look further.

The gold touches on the dial pick up this special De Ville Tresor’s 18-karat gold case measuring 40 millimeters across, and which is similar in shape as the De Ville Tresor’s gentlemen’s pieces. Mounted on the caseback is a commemorative medallion decorated with damaskeening engraving whose swirling pattern mimics that which Omega used on some 19-ligne calibres. Placed at the center of the circular pattern are the Omega brand name and logo, and the “125 years” and “19 Cal.” inscriptions set amid a red enamel background. A burgundy leather strap completes the ensemble.

The De Ville Tresor 125th Anniversary Edition isn’t all stunning looks either. Beneath the surface beats Omega’s in-house cal. 8929 which, like the 19-ligne calibre, is hand-wound. Like most new Omegas, this movement carries a chronometer certification from METAS, is anti-magnetic to as much as 15,000 gauss, and has a co-axial escapement. It spins at 28,800vph and has a power reserve of 72 hours.

So, yes, this piece fuses style and substance.

Glashutte Original Lady Serenade Special Edition
This piece, according to its maker, is actually “inspired by Valentine’s Day.”

It’s Glashutte Original’s Lady Serenade Special Edition, which relies on rubies to set its central theme. Surrounding the bezel of its 36-millimeter steel case are 52 bright-red rubies, each one marking a week in the course of a year. Matching this shimmering display is a ruby cabochon set atop the watch’s crown.

The rubies are contrasted by an off-white mother-of-pearl dial, which received a bit more attention from Glashutte Original artisans because it’s quite thin, making it prone to break if handled clumsily. And, apparently, complicating the process further is the application of the Roman numeral hour markers, which are decorated with eight brilliant-cut diamonds. Rounded hour and minute hands made of white gold, as well as a second hand whose counterweight is shaped in the infinity sign (indicating the eternal nature of true love, says Glashutte Original), complete the Lady Serenade’s dial composition.  A cherry red alligator leather strap makes the watch an even bolder wrist statement.

Powering this special Lady Serenade — available in only 50 pieces — is Glashutte Original’s in-house self-winding cal. 39-22, which spins at 28,000vph and has a power reserve of 40 hours. This movement gets the brand’s swan-neck fine adjustment setup that allows for precise regulation of the movement’s rate, guaranteeing accuracy. This feature can be glimpsed through the watch’s sapphire crystal caseback.

Without question, this lady in red is special outside and within.

Hermes Arceau Cavales
Two of Hermes’s recurring themes define the aesthetics of the Arceau Cavales — leather craft and horses (well, “cavale” translates to “mare”). In this piece the animal motifs loved by Hermes are rendered in artisanal leather marquetry, with the profile of horses formed by using small patches of leather.

The horses are stylized on the watch’s dial by means of subtly varied “Hermès Red” leathers pieces brightened by capucine and agate red accents. To put these together, an artisan needs about six hours to complete the work. Fittingly, the only other furniture that joins the artwork on the dial are slender leaf hands.

Framing the marquetry is a 41-millimeter white gold case with a rounded bezel and asymmetrical stirrup-shaped, or hoop-shaped, lugs — “arceau” means hoop. A red calfskin strap, with a white gold buckle, loops over the lugs.

Ticking within this case is Hermes’s own self-winding, 28-jewel cal. H1837, which spins at 28,800vph and has a 50-hour power reserve. Like the dial, it receives flourishes like circular-grained and snail finishing, as well as Hermes’s H pattern engravings on the rotor and bridges.

Only six examples of the Hermes Arceau Cavales are built though, so it’s going to be quite a challenge to secure one. But, then, she deserves this piece, right?