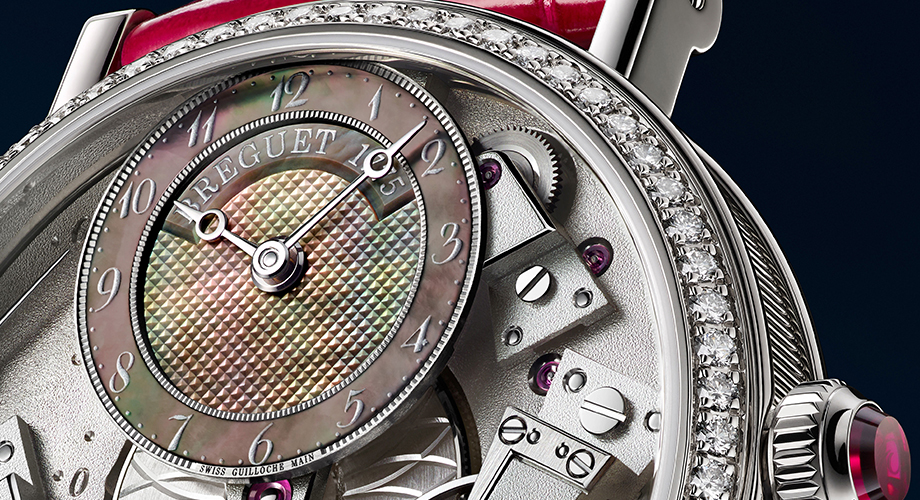 The traditions of Breguet find new force in the release of their Tradition Répétition Minutes Tourbillon 7087 and their Tradition Dame 7038. The irony of the names here is that the Tradition line is really rather forward-thinking, being not only offset and exposed in appearance but also being the result of years of research designed to advance the field. As the saying goes, you have to master the rules before you can break them. But as Breguet is showing us, you can also master the rules to build further upon them.

Much of Breguet’s history — their tradition, if you will — is based upon the use of established knowledge to push forward further. The brand’s sure hand with their finishing and external touches is one of their hallmarks, but in their case, form is decidedly matched by function.

For Breguet, it’s an old habit to have new thoughts; the tradition of innovation. To use one particular example, let’s look back to 1783. (The year, not the Reference number.) In 1783, the brand’s forefather Abraham-Louis Breguet was a watchmaker with a task in front of him. That task was making minute repeater watches, those charming sound-producing portable timepieces that sounded off the hours much like a grandfather clock. Abraham-Louis Breguet was making these timepieces, but even back then he was seeking new paths. In those days, most minute repeaters sounded off by using small blows sounded against the caseback of the watch. Breguet (the man) was the first horologist to sound chimes by using gong springs: metal wires coiled around the mechanical watch movement. This idea was so radical that it reinvented how the world saw — and heard, and made — minute repeaters. Even today, the gong spring chime is still widely used to make the audible wristwatches that the discerning few know and love. More than two hundred years later, watchmakers are still sounding by wire.

This little tale is particularly worth noting as we examine the Breguet 7087, the Breguet Traition Répétition Minutes Tourbillon 7087. This wristwatch has roots in the past but a modern, offset and dynamic look that presents the mechanical and audible workings of the movement to the eye of the wearer, just as the sound carries to his or her ear.

Centuries after the 1783 development, the watchmakers of the Breguet brand were tasked again: this time, with “developing a timepiece around a predetermined sound… an exceptionally pure sound and unprecedented tone.” To achieve this task, the craftsmen devoted themselves to scientific research and experimentation. They listened to over 200,000 combinations of frequencies. (Let that number sink in for a minute.) In developing the Tradition Répétition Minutes Tourbillon, they came up with six new patents, and just as incredibly, five new major innovative elements “never previously seen in a wristwatch repetition mechanism.”

One thing they did was to reexamine their own historical accomplishments. The gong springs we talked about earlier, the 1783 innovation that has endured to this day, have been revisited and reworked. Gong spring wires are usually wrapped around the watch movement. But in the 7087 the wires have been attached to the watch bezel, and vertically struck by the hammers. The Breguet artisans determined, in their arcane way, that the watch’s bezel and sapphire crystal transmit sound best when they are struck vertically.

The level of sophistication going on here is intense. Even the miniature hammers were subject to intense scrutiny and experimentation. For example, the watchmakers saw that striking the hammers against the wires — which is how the sound gets created — was happening in a non-optimal way.

Imagine a cable strung between a rooftop and the ground. You swing a hammer at it, it makes a noise, like a big vibrating boing. However, almost instantly, the cable rebounds, and in doing so will strike the hammer back, dampening the vibration of the cable and affecting the sound it makes. You can pull your punch (not swing the hammer so hard) but that also dampens the vibration. So what Breguet did (on a much smaller scale) was build what is called a semi-active buffer — it ONLY works AFTER the initial swing and strike. So you swing at the cable with full force, striking as hard as you can… but then a mechanism pulls the arm and hammer back out of the way, preventing a rebound strike, and creating the purest possible sound. Remember, all of this is happening on tiny wires strung within a watch case. It’s that level of detail that makes Breguet great, and the visibility of the dial construction means that the detail will be almost completely visible to the watch owner. The 7087 is a triumph of both sound, timekeeping, and the perfect visibility of both.

This also means that the watch’s tourbillon cage and magnetic governor are highly visible. A magnetic governor sounds like a robot overlord, but it’s really the means whereby the rotation of the mechanical elements is kept regular, no matter the speed of rotation. And because it is done by magnetic resistance, there is an added benefit of silence, since the elements never really contact. Thus, the only sounds you ever hear are those of the minute repeater gong itself.

“Much of Breguet’s history — their tradition, if you will — is based upon the use of established knowledge to push forward further. The brand’s sure hand with their finishing and external touches is one of their hallmarks, but in their case, form is decidedly matched by function.”

Less complicated mechanically but no less arresting visually is the Breguet Tradition Dame 7038. This lovely piece is a mechanical wonder that also celebrates the intricate capabilities of the Breguet house of watchmaking, in a more feminine platform.

Note that the bridge bearing the escapement is protected from shocks by a hand-chamfered device known as a pare-chute. Yes, that name seems destined to be misunderstood, although I suppose that all things considered, the airborne parachute really IS designed to protect you from shocks, especially that one big one. The Dame 7038 is a combination of design elements, fascinatingly working together to create a mix of mechanical strength, shifting color (from the lovely Tahitian mother-of-pearl inlay on the dial) and traditional gem-set elegance from the diamonds set around the bezel. I love that Breguet makes watches every bit as lovely and mechanically arresting at every level of complication.