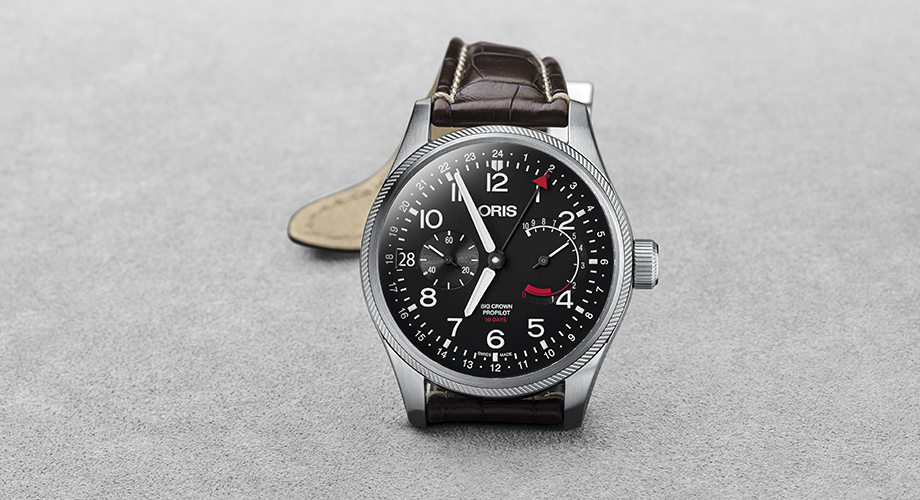 The stories of Oris and aviation are closely linked. Oris was founded in 1904 at the dawn of aviation, and made its first pilot’s pocket watch in the early 1910s. That was followed by the company’s first pilot’s wristwatch in 1917, a watch that featured an ingenious mechanism that meant the watch could only be adjusted when a button was pressed at 2 o’clock. The same spirit of invention inspired the Oris Big Crown, which debuted in 1938. Its oversized crown meant gloved airmen could adjust their watches quickly and easily. Today, Oris’s pilot’s watch collection is full of innovative watches that are trusted by pilots all over the world.

Second time zones, or GMT functions, were first introduced for pilots during the early period of the jet age, the 1950s. Travelling long distances and across time zones, they struggled to adjust to longer or shorter days – hence ‘jet lag’. A watch that showed home and local time helped overcome the barrier, psychologically at least. Today, these watches are worn not just by pilots, but also by international businessmen and frequent travellers.

Oris has made dozens of high-functioning second time zone watches in its long history – but the Big Crown ProPilot Calibre 114 marks a new high point. Its 24-hour time zone, indicated by a central pointer hour hand, offers local time adjustment to the nearest half hour, useful if you’re travelling to or from countries such as India or Australia.

As well as sharing many of the design tropes of sister watches in Oris’s Big Crown ProPilot collection – chiefly the oversized crown and a bezel design inspired by jet engine blades – it also showcases the groundbreaking innovations of Oris’s growing in-house watchmaking programme.

Calibre 114 is the fifth in-house developed movement released by Oris since 2014 and shares the same base architecture as Calibres 110 through 113. The 10-day power reserve is delivered by a single oversized barrel, while the inventive non-linear power reserve indicator (which shows the time remaining until the hand-wound movement needs rewinding with ever greater accuracy as the days pass), is managed by a bespoke worm gear designed exclusively for Oris’s movement suite.