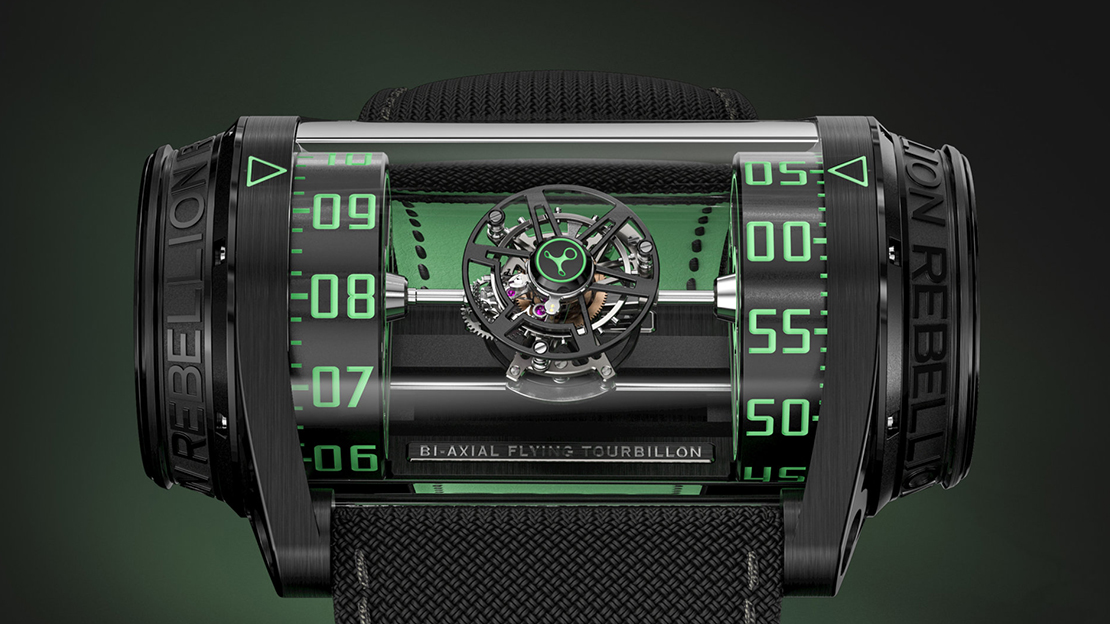 In Rebellion’s watchmaking laboratory, glass tubes are reminiscent of the famous test tubes used for experiments. But here is where the similarity ends. They unleash creativity! So, after having revolutionised the use of sapphire with the Weap One Asymmetrical flying Tourbillon and WeapOne Diamond Asymmetrical flying Tourbillon watches, Rebellion Timepieces once again provokes emotion with the Weap-One biaxial Tourbillon. A flying tourbillon, reinterpreted by Rebellion Timepieces, swirls in a slender 25 mm diameter and 53 mm long sapphire and titanium case. This development gives the regulating organ additional soul by contributing to the performance of the calibre and also to the aesthetics of the timepiece.

For this new timepiece, the flying tourbillon is positioned on a frame held on either side by two plates. As if in suspension, it operates its gyrations on two axes; it operates its gyrations on two axes both in one minute. Thanks to the presence of its flying tourbillon, the Weap-One biaxial Tourbillon effectively resists the negative effects of gravity while having a real power of visual attraction! Precision is ever present, as is performance. The calibre guarantees at least 50 hours of power reserve once the mechanism is wound. This ingenious hand-wound movement is the result of a complex assembly, the outcome of long-term development. Two discreet flat titanium crowns, perfectly integrated, close its atypical cylinder-shaped case. The left-hand one is dedicated to setting the time and the right-hand one to winding the calibre. The hours and minutes are displayed using two rollers positioned at the ends. The numerals coated with coloured Super Luminova®, along with the Swiss Made label and the name of the brand affixed to the tourbillon frame, all together accentuate the offbeat style of the piece and give it a surprising personality in the dark.