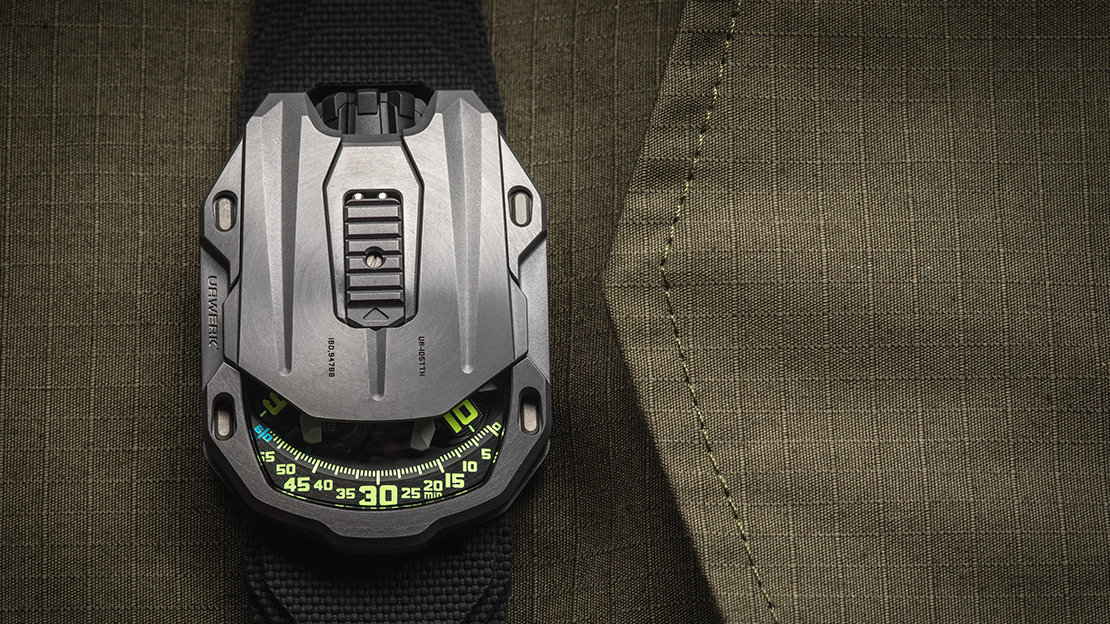 URWERK is an independent watch brand, and want to remain independent in order to remain true to themselves. Their goal is to design and craft haute horlogerie timepieces that blend tradition with futuristic visions. They make less than 150 pieces per year. Every now and then, they have to discontinue a collection in order to make room for a new one. This year, they decided to end the run of the 105 collection with this last model: the URWERK UR-105 TTH “Tantalum Hull”.

Tantalum is a rare metal that is very hard and is renowned for its resistance to corrosion. This precious metal is difficult to machine and finish. URWERK first came out with a watch made out of tantalum a few years ago, the UR-110. It is so tough that it “eats” the CNC machine bits, reducing its life by a factor of three. Despite the manufacturing team’s plea to URWERK co-founder Martin Frei not to use the metal again, the latter was able to convince his team to use it for the final model of the UR-105 collection.

Frei explains: “The UR-105 TTH comes with a protective cover, a breastplate that protects the mechanism. Tantalum is a perfect protective shield against corrosion, Hence its name Tantalum Hull.” Activating the sliding “tongue” of the UR-105 TTH opens the hull to reveal its mechanics, featuring satellite time indication built on a new skeleton carousel. The latter supports four hour satellites, each displaying three hour numerals that rotate in turn along the minute track, providing both analog and digital time displays.

A power reserve indication and digital seconds complete the information on the dial The digital seconds displaying the seconds in ten-second increments is particularly remarkable. To make it as light as possible, the seconds disk was made using the LIGA photolithography process, and the marker is open worked.

On the back, two turbines regulate the movement’s automatic winding system, which can be easily adjusted using a small lever according to how active the wearer is. In the “FULL” position, the slightest movement of the wrist is enough to wind the mainspring. In “STOP” mode, the automatic winding system is deactivated and the UR-105 is manually wound. A third intermediate position, “RED” (for REDUCED), moderates winding to minimise excessive tension and wear.

This 12-piece limited edition timepiece beats at 28,800 VPH, has a 48-hour power reserve, and has a water resistance of 30 meters.