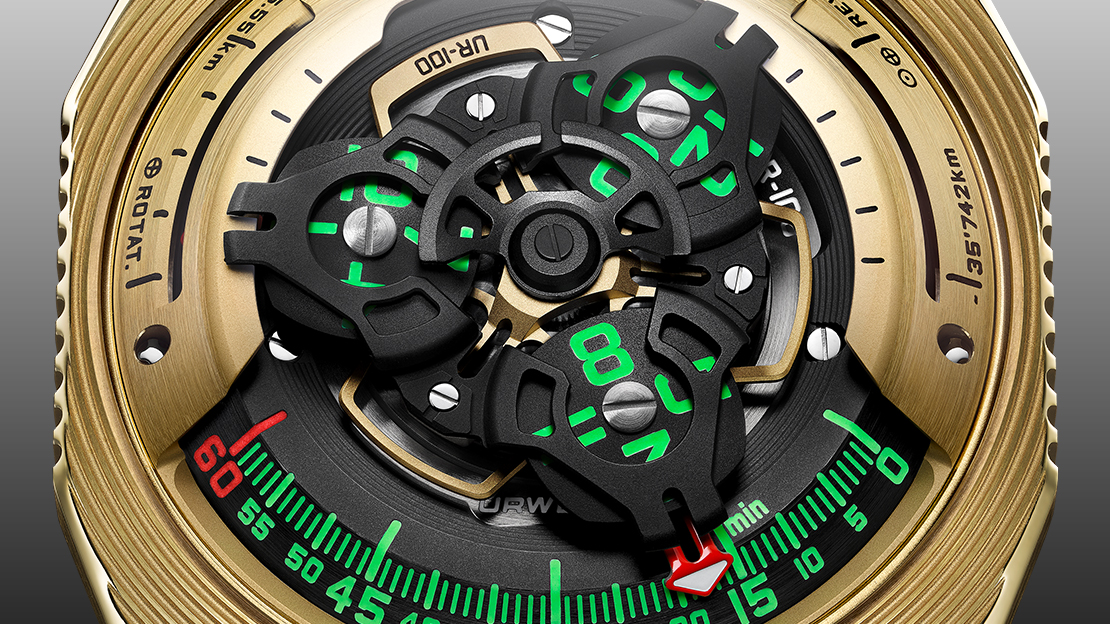 Electrum is one of the original precious materials, regarded by the ancients as a veritable treasure. This gold and silver alloy was indeed much coveted among Ancient Greeks, Amerindian civilisations and Ancient Egyptians. While the first coins were minted from this metal, the noble, flamboyant, luminous material gradually fell into oblivion… while awaiting a much-deserved new lease on life.

URWERK recreates this magic in the UR-100 Electrum which proudly proclaims ‘here comes the sun’ as the Beatles famously sang.

The UR-100 Electrum is the new edition of URWERK’s 100 collection. This 25-piece edition has a case made of an organic gold and palladium alloy. In addition to its sunny yellow colour, it features a structured, pleated and undulating surface. This highly distinctive aesthetic is based on the numerous aesthetic references of Martin Frei, co-founder of URWERK.

“The case of the UR-100 Electrum is covered with grooves. Everyone can project their own universe into this design. I see the tiers of an ancient Greek theatre, the subtle pleats of an Iris van Herpen dress, a piece of raw earth hollowed out by the imprints of time, the Seigaiha motif of a traditional kimono… This creation is an invitation to embark on a temporal and sensory journey”

The rhythm and rhyme of time are played out in the centre of this golden arena. In addition to the satellite-type hours and minutes display, the UR-100 Electrum provides a new item of information. Once the 60th minute has passed, the minutes hand vanishes and reappears as a kilometre counter illustrating the 555 kilometres travelled every 20 minutes by every inhabitant of the Earth.

This in fact corresponds to the Earth’s average speed of rotation calculated at the Equator. Earth’s revolution around the sun – corresponding to 35,740 kilometres per 20 minutes – is displayed exactly opposite. On the face of the UR-100 Electrum, hours and kilometres thus share the same status, the same scale of value. These units are illuminated in incandescent green for the hours and in blazing white for the kilometres.

“This creation was inspired by a gift from my father, Geri Baumgartner, a renowned restorer of antique clocks. It is a clock made by Gustave Sandoz for the 1893 World’s Fair. Its distinctive feature is that instead of counting off the hours, it indicates the distance travelled by the Earth at the Equator. Martin Frei, designer and co-founder of URWERK, fought hard to have this indication appear on the dials of the UR-100. In my view, a watch is both a physical and abstract reproduction of our situation on Earth. It anchors us to a precise time and longitude, while at the same time testifying to the fleeting nature of that position.”

Beating beneath the dome of the UR-100 is URWERK Calibre 12.01 with its three-satellite time display. The satellite indicating the exact time moves from 0 to 60 along the minutes track.