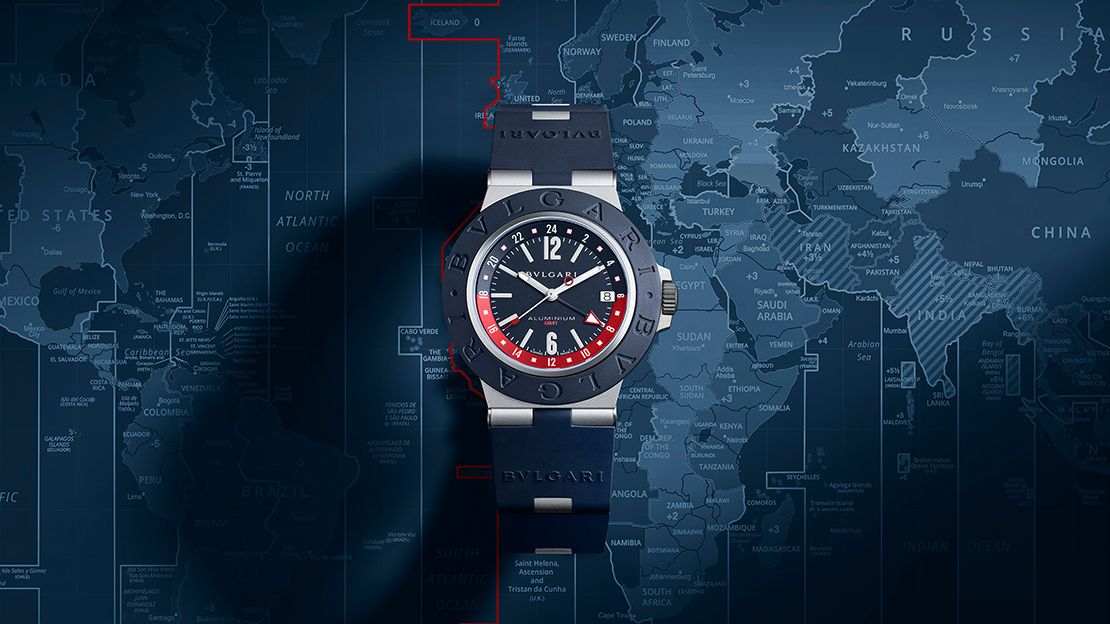 For a year and a half, this reality has also been on lockdown, but not for long now. The end of summer signals a return to travel, thereby perfectly coinciding with the September launch of the Bulgari Aluminium GMT!

Bulgari Aluminium needs no introduction. The first luxury watch made of aluminium and topped by a rubber bezel, this timepiece that became a legend in the late 1990s has maintained its original spirit: urban, disruptive, and imbued with the kind of ‘cool attitude’ that makes such a perfect match with special and distinctive moments.

In this respect, Bulgari Alvminium GMT (standing for Greenwich Mean Time, previously known as Universal Time and now renamed UTC for Coordinated Universal Time) is a worthy heir to the modern and graphic original model. It has retained the essential attributes – aluminium case, blue bezel and rubber strap – forming the basis of its identity. It has however been given an additional, contemporary function conveying the dreams naturally arising from a taste for travel: namely crossing the 24 time zones. A nod to the model that was flaunted at the time of its 1998 launch on the livery of an Alitalia Boeing 747 jumbo jet regularly criss-crossing the continents.

Easy to use and perfectly readable, the Bulgari Aluminium GMT serves to read both home time and local time. The former is conventionally indicated via hours and minutes hands pointing to the markings on the inner dial zone; while the latter is displayed by a red-tipped hand positioned on the 24-hour outer scale of the dial. It is divided into two different coloured zones of 12 hours each. The circular track serves to adjust and distinguish between day and night according to the time zone where the wearer finds himself. All settings are simple to perform using the crown.

Bulgari Aluminium GMT is obviously intended to be functional, yet its nature goes beyond that: it speaks a universal language, regardless of the time zone. The stars are aligning and Bulgari Aluminium GMT will be the perfect companion for the new sesame, the Covid passport!