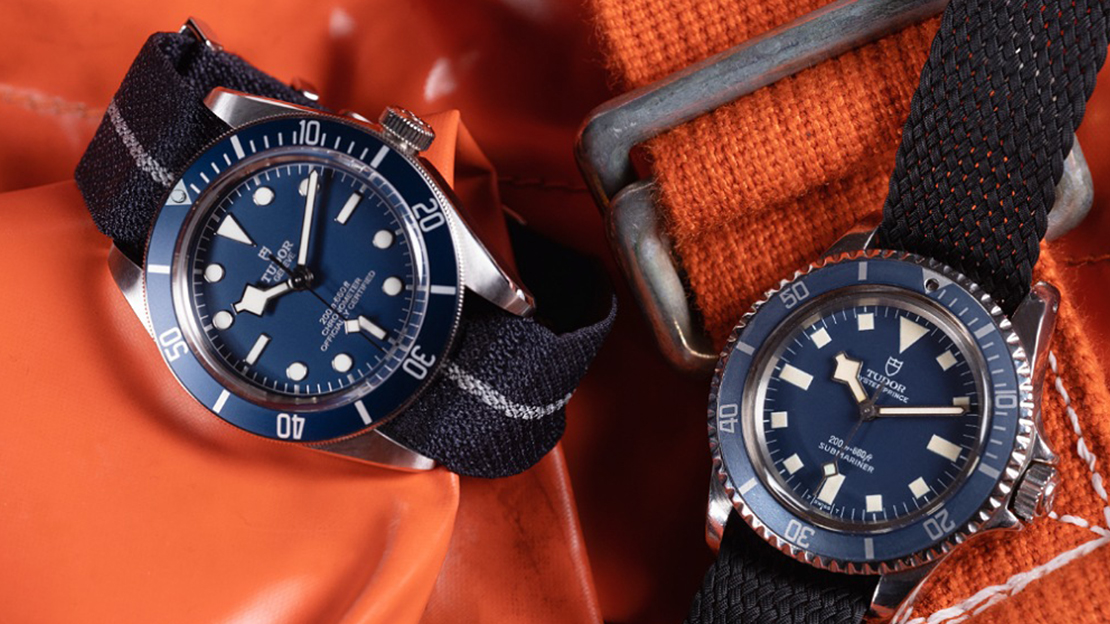 In the early 1950s, the French navy carried out large-scale underwater activities. And for this, they needed a watch that could handle those proceedings. During that time, TUDOR was producing robust, technical watches positioned at an accessible price. The French navy contacted TUDOR to design a watch for them, and the TUDOR Oyster Prince Submariner – reference 7922 – was launched in 1954. It had a case with a screw down case back, had a guaranteed water resistance of 100 meters, large hour markers and hands with luminous material for easy reading in less-then-optimal light conditions. Its birotational bezel had graduations in 5-minute intervals to precisely measure dive times and allowed adjustments for decompression stages. It didn’t take long for navies of other countries to have TUDOR divers’ watches on their wrists.

Today, the TUDOR collection comprises a number of references whose aesthetics allude to this heritage.

Black Bay Fifty-Eight “Navy Blue”
Blue TUDOR divers’ watches are inextricable linked to the French navy. In the 1970s. The French navy opted for the color blue over the usual black dial typical of divers’ watches of the time. Also specific to the era was an inscription engraved on the back that read “M.N.” with the last two digits of the year it was issued. These features made these watches especially popular among collectors.

The Black Bay Fifty-Eight “Nave Blue” alludes to these, along with the 39 mm diameter size typical during those times. It is accompanied by a navy blue woven fabric strap that was manufactured in France using traditional techniques.

Black Bay P01
In 1967, TUDOR began developing a technical model to replace the Oyster Prince Submariner 7928 reference supplied at that time. This new watch needed to meet a set of specifications laid down by the American government and incorporated the results of the latest research into functionality and ergonomics carried out by the brand’s engineers. The Back Bay P01 – Prototype 1 – was inspired by a prototype developed as part of this study. Produced in a contemporary spirit while at the same time retaining the principle of the winding crown at 4 o’clock, as well as the prominent lug covers of the 1960s model, the Black Bay P01 tells a story that was little known in TUDOR;s naval history.

Black Bay Fifty-Eight
With its proportions, overall shape, gold accents on the dial, and red triangle on the rotating beel, the Black Bay Fifty-Eight is probably the model closest – in terms of aesthetics – to the brand’s first divers’ watches. At the time, one particular reference had been chosen by the French and American navies in the second half of the 1950s: reference 7924, now known as the “Big Crown”, offering water resistance to 200 meters.

Black Bay Bronze
Although this model does not allude to any particular watch in TUDOR’s naval history, it does present some aesthetic nods tot he rustic nature of life at sea. The bronze used for the watch’s case is a high-performance cupro-aluminum alloy widely used in naval engineering for submerged parts. It has a high level of corrosion resistance and has a characteristic of developing a unique patina over time. The overall visual effect is of a rich, patinated object that may have weathered the seven seas for years, making the watch particular to its wearer.

For the future: Salanitro and Patek Philippe