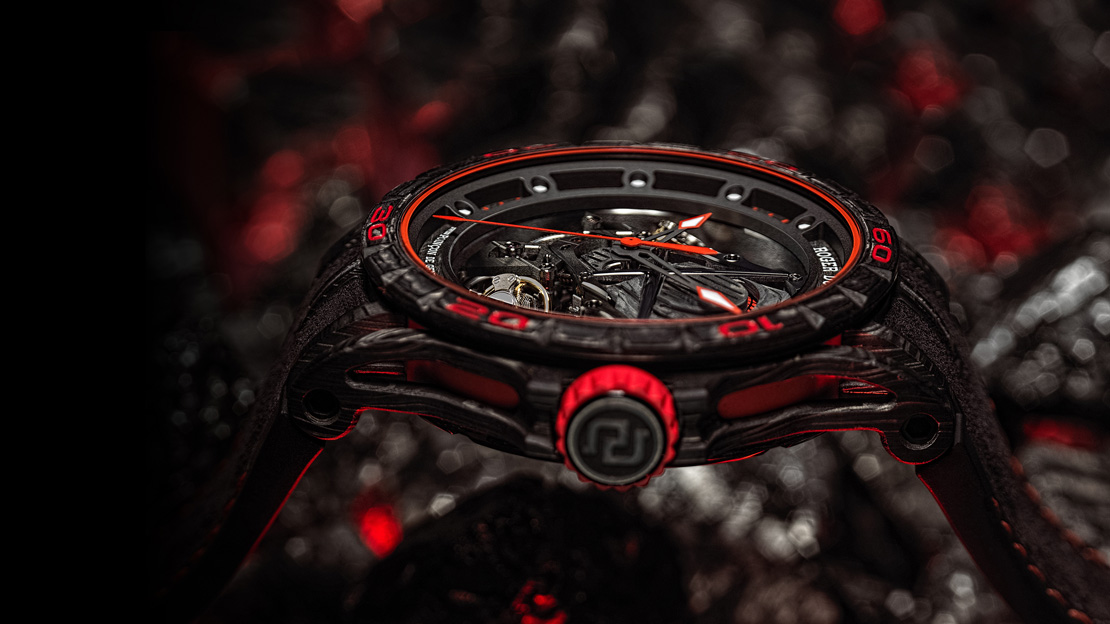 Visionary watchmaker Roger Dubuis’ close alliance with Italian automaker Automobili Lamborghini has given rise to a couple of pretty cutting-edge timepieces that harked the brand’s philosophy of living larger than life. Inspired by meticulous engineers and crafted by incredible watchmakers, the timepieces resulting from this rare form of diabolical duality are unquestionable proof that Roger Dubuis is without a doubt the most exciting way to experience Hyper Horology.

In this feature we present two watches that were borne out of the iconic partnership between Roger Dubuis and Lamborghini Squadra Corse, the motorsport division of the Italian carmaker. First up, the Excalibur Aventador S was the first horological expression of this high-speed partnership to hit the track and the Manufacture is gearing up to introduce a new black and red version. The Excalibur Aventador S features a range of easily identifiable design elements drawn directly from its motorized alter ego, complete with two sprung balances inclined at 45 degrees, strut bars, a power reserve with racing codes and an Alcantara strap. Living up to the “Powered by Raging Mechanics” signature and fueled by a shared flair for technological complexity, the Excalibur Aventador S is impelled by an engine in the shape of the specially developed Duotor calibre. This movement created by Roger Dubuis is exclusive only to Lamborghini watches and is protected by no less than five patents.

The second watch was launched simultaneously with the unveiling of Lamborghini’s Squadra Corse SCV12, created by a special team within the racing division itself. The freshly evolved SCV12 is the first limited-edition V12 engine-based hypercar for track only, specially boosted for Super Trofeo races and the most powerful ever made by Lamborghini. It has the capacity to exceed 830-hp thanks to aerodynamic supercharging at high speed, along with higher downforce levels than a GT3 car and unprecedented aerodynamic efficiency. In creating a watch to match the future-driven approach taken by the SCV12’s engineers, the team at Roger Dubuis evolved the Duotor used for Lamborghini watches to give rise to the new Excalibur Essenza SCV12. They did this by stripping it down to essentials to enhance performance while harmonizing the design code shared by the timepiece and the track predator. Freed from its upper bridge and reworked in skeleton flying mode shaped like the wheel-rim of the Lamborghini Essenza SCV12, the barrel can be viewed from the top as if one were peering through a transparent supercar hood. The strut bars on the top of the calibre remain a signature feature of Excalibur Lamborghini-inspired models.

The similarities between the two iconic brands extends to the way both offer clients a way to personalize timepiece and automobile. While Lamborghini is renowned for their “Ad Personam” program, Roger Dubuis has one called “Rarities” wherein each owner of the Excalibur Essenza SCV12 can enjoy the thrill of co-creating a truly one of a kind timepiece.