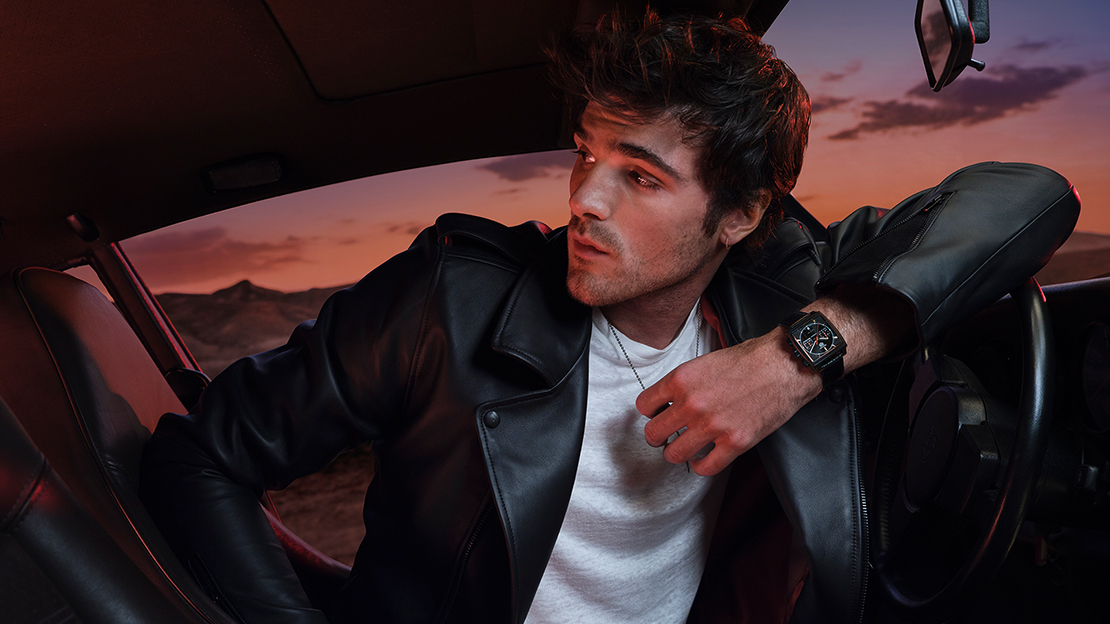 At just 24, Australian Jacob Elordi has done what most actors spend their careers dreaming about: not only landing the lead in a show that looks set to define a generation.

As the face of the TAG Heuer Monaco, Elordi will represent a timepiece that is no less daring – and no less instantly iconic. Like Elordi, the square-cased Monaco re-wrote the rulebook, defied convention, and became timeless precisely because nobody had seen anything like it before.

And while it’s Euphoria that has sent Elordi’s career into the stratosphere – the boundary-breaking teen-centred show is the second most-watched in HBO’s history, behind only Game of Thrones – it’s his throwback style away from the camera that really sees him stand apart, favouring a mid-century preppy button-down hip that’s sharp yet understated, curated yet classic, and recalls such greats as Marlon Brando and the “King of Cool” himself, Steve McQueen, with an old-school confidence that knows less is more.

When Elordi presented at the Academy Awards ceremony earlier this year, it was no surprise to see him choose to wear a TAG Heuer Monaco with a black dial, white sub-dials and black alligator strap. It paired perfectly with his tuxedo. But just as key, it was an Oscars debut in which he wore a timepiece made famous by a silver-screen icon: that of McQueen himself, in 1971 racing film Le Mans.

“We are incredibly excited to announce Jacob Elordi as ambassador for the TAG Heuer Monaco. He is the stand-out star of a new generation, an artist who is unafraid to take risks, taking roles that challenge both himself and the audience. He is also someone who comes fully-formed with his own strong sense of timeless style. The TAG Heuer Monaco became the watch for a new generation when it was first launched in 1969 and there is no better standard-bearer for it as it continues to be discovered anew by each generation since,” says TAG Heuer CEO Frédéric Arnault.

Jacob Elordi: “I’ve always been drawn to things that are both classic and timeless so partnering with TAG Heuer was perfect for me. I’ve always admired Hollywood’s iconic leading men, so to wear the Monaco – a watch made famous by Steve McQueen – is something special. TAG Heuer has been the epitome of elegance and excellence for over 160 years, and it’s thrilling to be their representative for the next generation.”

Euphoria sees Elordi as a seemingly typical high-school student – but his performance, and the show’s depiction of high-school life, is anything but ordinary.

Euphoria has broken boundaries and has been nominated for both a BAFTA and Golden Globe.

For Elordi, though, it looks set to just be the start. In March this year he starred in Deep Water, from Fatal Attraction and Indecent Proposal director Adrian Lyne. Elordi played a university student who finds himself drawn into the orbit of a toxic couple with a dark secret. He will also star in Emerald Fennell’s film “Saltburn.”

For the rest of us, it’s the opposite: we’re all drawn into Elordi’s orbit now.

TAG Heuer Monaco
Distinctive and rebellious, instantly iconic yet utterly idiosyncratic: there is no better pairing than the chronograph that changed everything and an actor who is playing by his own rules. Often copied but never equalled, the square-shaped chronograph, created in 1969, is named after the glamourous Formula One race and brought to the big screen by Steve McQueen in his 1971 movie Le Mans. It symbolizes the brand’s love for speed and its deeply-rooted racing spirit.

Upon its release, the then Heuer Monaco broke with everything everyone assumed a timepiece could be. It wasn’t just the first automatic chronograph with a micro-rotor winding system, but also the first square-faced chronograph with perfect water-resistance. And form followed function: to emphasise that the winding wheel was no longer needed, the crown was moved to the left rather than its usual spot on the right.

Jacob Elordi: “The TAG Heuer Monaco was an instant design classic when it launched in 1969 and it only gets better with each new iteration – constantly improved but its iconic looks never altered. There’s no other timepiece that is just as perfect for black-tie galas as it is for high-octane action.”

Stylistically, nothing had ever looked like the TAG Heuer Monaco before: the square case was cut at right-angles, the bevelled crystal was of virtually unscratchable sapphire. It was an avant-garde design equally at home on the red carpet as it is on the race track.

The latest is a Special Edition that specifically celebrates its motor-racing history and the legendary Monaco Grand Prix. Taking its inspiration from the 1970s and the Heuer Monaco Dark Lord, the newest TAG Heuer Monaco is executed in Grade 2 titanium and coated in diamond-like carbon. The result is a deep, rich colour that fully lives up to the TAG Heuer Monaco name itself, reflecting both the unmatched luxury of the Principality, and contrasted with the danger of the legendary Formula 1 race.

It was the race-track after all, in the form of Le Mans, that the TAG Heuer Monaco would truly become iconic. Motor-racing enthusiast McQueen famously performed his own stunts – something else he seemingly shares with Elordi, who learnt motorbike stunt riding for The Kissing Booth – and was taught to drive in Le Mans by Swiss motor-racing legend Jo Siffert, who wore a Heuer-branded uniform. As such, McQueen wore the same: when it came to selecting which watch his character (racing driver Michael Delaney) would wear, the choice was obvious. A horological silver-screen icon was born.

The winding wheel, though, is still placed on the right rather than the left: a reminder, as the likes of McQueen and Elordi know only too well, that true icons never do things by halves.