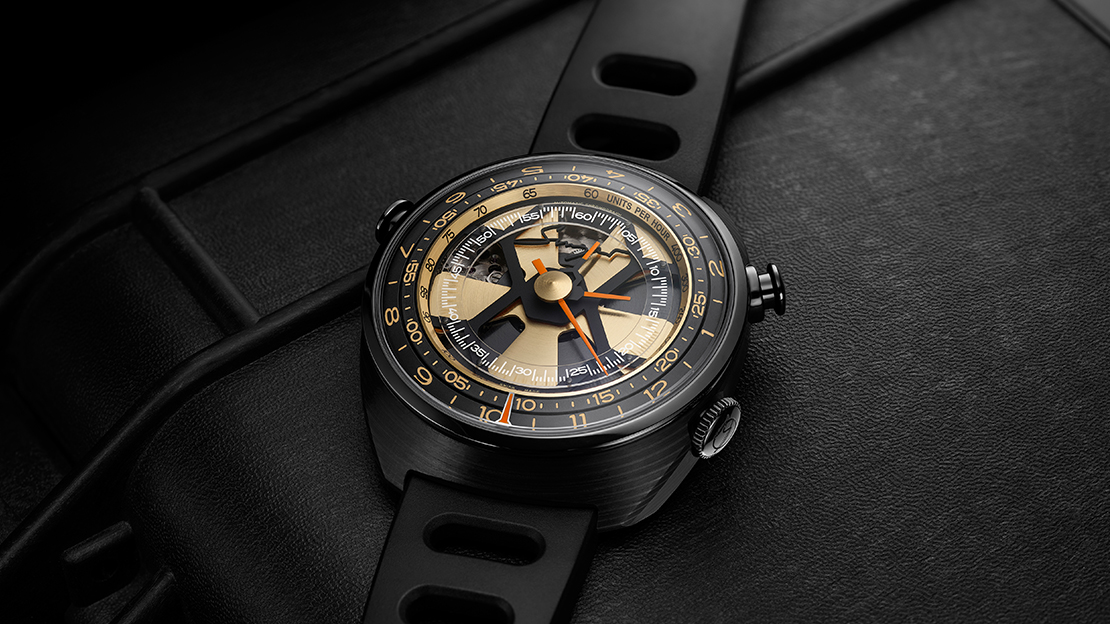 Singer Reimagined was created with a mission to reimagine the sports chronograph. This was made possible with the help of our award-winning movement, the Agengraphe. One side of the Agengraphe has always been visible through the caseback of the Track1. A frequently asked question was “where is the oscillating weight that powers the watch?” The answer is that the rotor was relocated to a position underneath the dial, allowing an unobstructed view of the Track 1 movement through the caseback. Here it remained hidden, seen only by watchmakers. With the skeleton front, the full movement is revealed.

A SECRET REVEALED
The Track1 SKLT CARBON Edition features the new-generation transparent dial, suspended over the movement, allowing a view of the components below. Shaped as a structural chassis, the open-work dial reveals the signature minutes wheel below, highlighted in a golden finish, to match the aesthetic of this special watch. Underneath the minutes wheel lies the automatic rotor itself. Through the open-work dial of the Track1 SKLT CARBON Edition, these vital elements of the movement are exposed and visible, revealing the secret of our automatic system.

LIGHT-WEIGHT JEWEL
Singer Track1 SKLT CARBON Edition is crafted from high-tech materials with a single-minded pursuit of aesthetic and engineering perfection. The watch case is fashioned from stratified forged carbon engineered with the intent of reducing mass and enhancing lightness. The case made from this exclusive material has been milled directly from a solid bloc, in order to ensure dimensional perfection and garantee 100 meters of waterproofness. This specific conception allows as well a direct encasing of the movement itself.

THE CAOUTCHOUC STRAP
On the occasion of the revealing of the Track1 SKLT CARBON Edition and for the very first time, Singer introduces a caoutchouc strap in its collection. The black openwork strap reinterprets the iconic rivet perforations enhancing both the vintage style and the energetic look. This new powerful Singer signature perfectly matches with the sportivity of the watch and its performances. The strap was designed and tailored for all sizes. Indeed, conceived in large size, the strap can be cut to fit smallest wrist sizes thanks to a double clasp housing. It is secured with the folding buckle made of stainless steel with a black DLC coating.

DEVOTION TO DETAILS
“Everything is Important” remains the mantra at Singer. Accordingly, they have also turned their attention to the details elsewhere. At the outer edge of the watch, the ceramic rotating hours and minutes discs carry engraved numerals filled in golden Superluminova®, against a matte black background. On the dial flange, a tachymetric scale is presented with black numerals against a circular brushed golden background. The Singer name is carved from metal and becomes three-dimensional, floating over the visible movement. The transparent sapphire ring, suspended and riveted to the chassis, carries the single base 60 scale, dedicated to all chronograph functions. This feature, a signature of the Track 1, allows each chrono hand (seconds, minutes and hours) to point to the same scale, improving clarity. Bezel, push buttons and crown, made of grade 5 titanium, are mirror polished by hand and coated in black DLC in order to provide highlight and constrast.

THE ENGINE UNDER THE BONNET
The AgenGraphe, the calibre powering the Singer Track1 stands apart from all previous chronograph movements. The result of a decade of development, this groundbreaking piece of mechanical ingenuitycompletely redefines fundamental principles that have remained unchanged for decades. The underlying idea that led to the invention of the AgenGraphe was to enhance the legibility of the chronograph – which is usually poor – with the use of small counters spread out across the dial. Thanks to a radically new architecture, the AgenGraphe brings together all the chronograph functions in the centre of the watch, allowing for an easy and intuitive reading of elapsed time. To further enhance legibility, the chronograph incorporates jumping minute and hour indicators. To connect the chronograph mechanism to the timekeeping gear train, the AgenGraphe features an innovative clutch mechanism. The coupling is made horizontally which requires less space, yet it is made using friction, just like a vertical clutch. The dial-side rotor (made possible because the hands are on a central axis) leaves an unimpeded view of the movement and its 477 meticulously hand-finished parts.