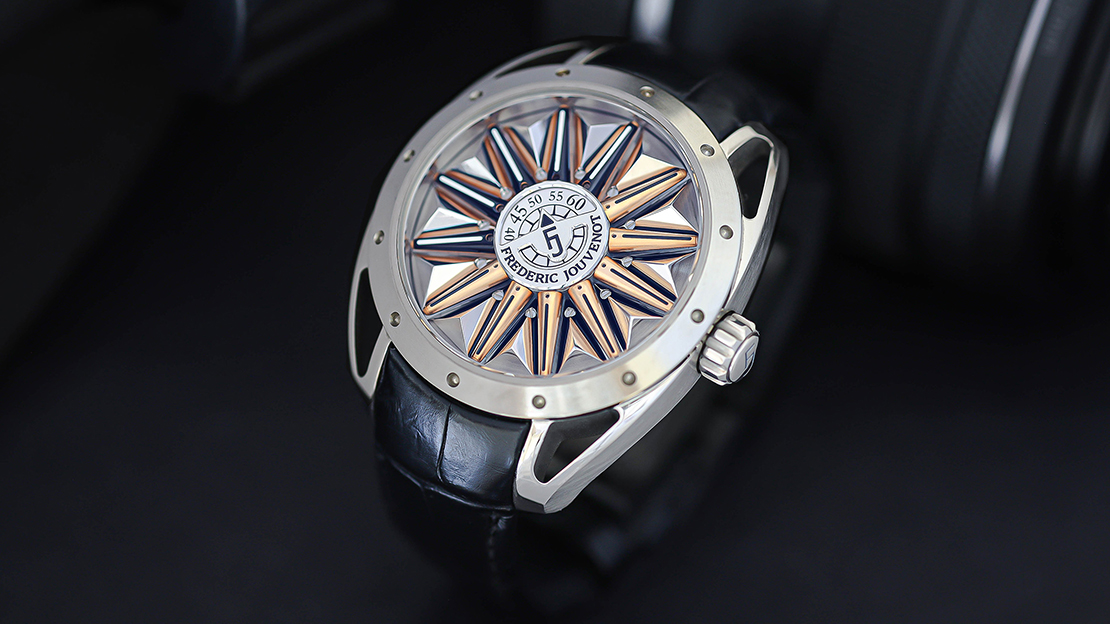 Inspired by the ancient world, the great explorers, and the astronomical instruments they invented. Frederic Jouvenot collections are all about invention, innovative concepts, with a spice of poetry and artistic sensitivity.

DISCOVERIES & ASTRONOMICAL INSTRUMENTS
Fascinated by the Sun, the intricate play of light and shade in a three-dimensional playground, and how humanity came to master one of the first horological device. Frederic Jouvenot developed the very first mechanical sundial, a micro-mechanics marvel that embodies his disruptive take on modern watchmaking. Whereas a Tourbillon cage usually fits 80 components in 13mm, Frederic Jouvenot 24-hour Jumping cage is the result of a 2-year R&D and several patents, fitting 100 components in a 12.916 mm central cage, including 24 rubies which will activate the hour’s jumping beams.

A PERFECT LIGHT REFLECTION
The “Helios” collection pays a tribute to the Greek mythologies, being the very first hour display over 24 hours that shows the sun’s path and the alternation of night and day. From Latin “whiteness”, Albedo is a term related to Astronomy, describing the reflective property of planets, asteroids, celestial bodies & surfaces. Limited to 28 pieces, the “Helios Albedo” dial is made of 12 black-polished symmetrical micro-structures, using a very traditional hand-finishing technique that takes hours to give each single element its mirror-like effect. The result is a mesmerizing optical effect where surfaces reflect each other, contrasting with the 12 golden sunbeams that appear and then flip over one after another. The manual movement, entirely developed by Frederic Jouvenot, pays homage to the finest Swiss Watchmaking traditions.