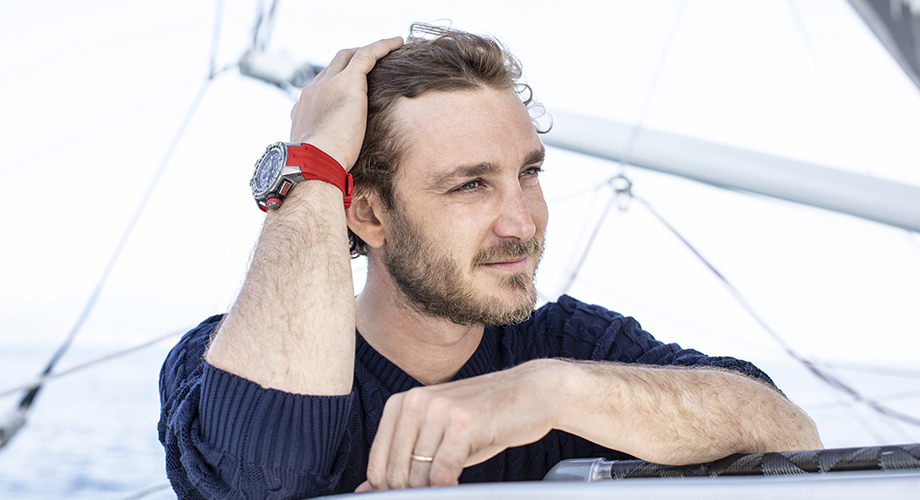 IT’S a meeting of blue bloods, one hailing from Monaco royalty, the other a prominent member of horology’s new class of nobles. The former is Pierre Rainer Stefano Casighari, the 30-year-old son of Princess Caroline and Stefano Casighari, and the grandson of Prince Rainier III and Grace Kelly. The latter is luxury watchmaker Richard Mille. And the twain meets as Casighari prepares to set sail under the RM banner.

At his age, Casighari is already an accomplished name in sailing. He got his feet wet competitively in 2010, gaining experience aboard Monaco Yacht Club’s flagship Tuiga. He has since proved to be an excellent coxswain as he sailed every possible boat of note—VOR70, MOD70, IMOCA, GC32, TP 52, Esimit Europa II—while winning numerous high-profile regattas and prizes along the route. Counted among these are the Palermo-Monte Carlo, which TP 52 class he won twice; the Giraglia Rolex Cup aboard what is considered as one of the fastest and most technologically advanced yachts on the seas—the Esimit Europa II; the Cape to Rio Yacht Race, where his record still stands to this day; the Fastnet Race, placing third in the doubles category; and the Middle Sea Race, where he took line honors.

Casighari in 2016 then formed his own sailing team. Along with this move came the purchase of a new-generation “flying” catamaran. Christened Malizia (or Cunning), the boat was a risky, if not entirely ill-advised, move because Casighari, nor his teammate Boris Herrmann, had any prior experience with this type of watercraft.

But the effort paid off as the pair, in their first regatta on Lake Garda, clinched several legs of the event to best sailing luminaries who could boast of America’s Cup credentials. More recently, Casighari and Herrmann lined up for their debut in the Race of the Globe series aboard the Malizia II, a new-generation, 60-foot monohull. Next year, the team is eyeing to take on the 2019 Transat Jacques Vabre, also aboard the Malizia II.

When Casighari sets sail for this, the RM 60-01 Regatta Flyback Chronograph will be strapped on his wrist, serving as a tool much like his monohull is. After all, this timepiece, introduced by Richard Mille in 2014, was specifically developed for navigating the seas. It’s fitted with a UTC hand and a rotating bezel with compass.

Adjusting these features allows a sailor to determine his position at sea—and this works for both Northern and Southern hemispheres. Also, a 24-hour scale lets one use the UTC hand to track a second time zone if it isn’t being used to navigate. And, surely, the flyback chronograph could come in quite handy, too.

Richard Mille seems only too happy to get the opportunity to test the RM 60-01 Regatta in genuine nautical use, and how the piece adapts to the hostilities of open water sailing—obviously, saltwater alone poses a challenge already. But Casighari appears confident. He says of the watch: “I love its architecture. And besides, it’s the first mechanical watch I’ve seen that has bidirectional bezel with compass, a crucial instrument for navigation.”

Well, Richard Mille did say the RM 60-01 Regatta Flyback Chronograph was developed to sail the Seven Seas. Now, it looks like it really would.