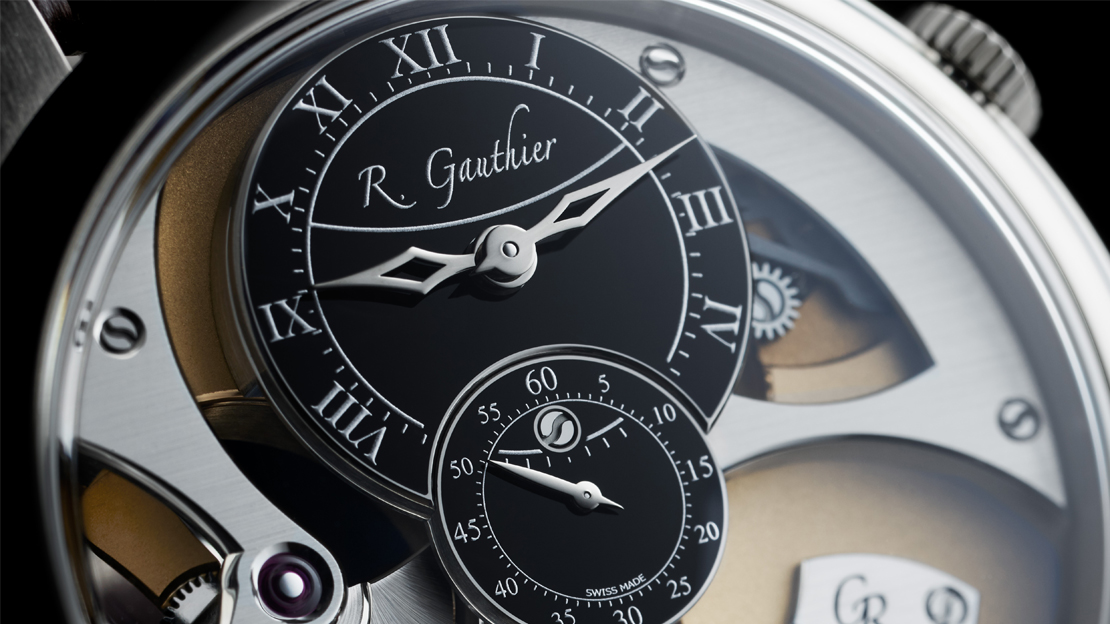 ONLY three calibres comprise Romain Gauthier’s engine lineup. These power as many collections, belonging in which are the models Prestige HM and HMS (introduced in 2007 and 2010, respectively), Logical One (2013) and Insight Micro-Rotor (2017), as well as their few spinoffs. None among these three calibres actually pack any serious complication; a power reserve meter is probably it. But the manner by which these movements keep time transcends mundane function and elevates this to high engineering and artistry.

Consider: The Prestige HM and HMS calibre has a flat winding crown mounted on the caseback so that energy need not take a 90-degree turn, making the transmission more efficient.

The Logical One calibre is kitted with a chain-and-fusee constant-force mechanism to guarantee it is always accurate, as well as a pusher-operated winding system.

And despite the Insight Micro-Rotor calibre being the lone self-winding ticker among the three, it remains elegant, effective. Largely, this is because of a bi-directional micro rotor made of 22-karat gold and a pair of mainspring barrels which can store power good for 80 hours.

In all three calibres, design and finishing are taken to a plane reached only by a handful of watchmakers. As such, Romain Gauthier watches put the intricate workings and details of these micro marvels in full view — well, as much as humanly possible, anyway — making them the major artistic attraction of the timepieces as much as they are their mechanical souls.

This has certainly been the case with the Insight Micro-Motor. Initially available in a 39.5-millimeter-wide case either made of platinum or rose gold, each of which matched to white, blue or black dials, the watch is now offered in a white gold case of the same dimension. Dial choices remain to be white, blue and black with grand feu enamel finishing. Hands are steel.

The layout of the watch’s dial furniture is retained. At the center rests the small second register. This allocates the lower portion of the larger dial at 12 o’clock, which in turn displays the hours and minutes. As far as time-telling readouts are concerned, these are actually it.

The rest of the dial real estate is devoted to the calibre. At 6 o’clock sits the balance mechanism, at 9 o’clock the micro-rotor framed by a cutout in the mainplate. The mainplate is now hand-frosted 4.5N rose gold, replacing the NAC or palladium coating used in previous versions of the Insight Micro-Rotor. This new golden landscape serves as a dramatic backdrop for the subdials and palladium-coated bridges.

It certainly makes the calibre’s micro rotor pop out. This component is visible both from the watch’s dial side and the display window on the caseback, turning it into a key design feature. Its mass — gold is heavy — compensates for its size so it is able to wind the pair of sequential mainspring barrels. Now, because it is heavy, this rotor is propped between two bridges rather than the usual lone support so it stays secure in place. Rubies fitted in holes at the tip of the bridges, through which the rotor is mounted, allow for more fluid oscillations. Simply, the smooth rubies reduce friction. Plus, they are tougher than conventional metal ball bearings.

Decorative touches lavished on this 33-jewel calibre — which oscillates at 28,800vph, by the way — count in handmade and polished bevels, hand-frosting, circular-graining, straight-graining and snailing.

Only 30 examples of the latest Insight Micro-Rotor are available, 10 each for the white-dial, black-dial and blue-dial versions. Romain Gauthier asserts these are the watch’s “most collector-oriented guise to date.” There is no reason to doubt this claim.