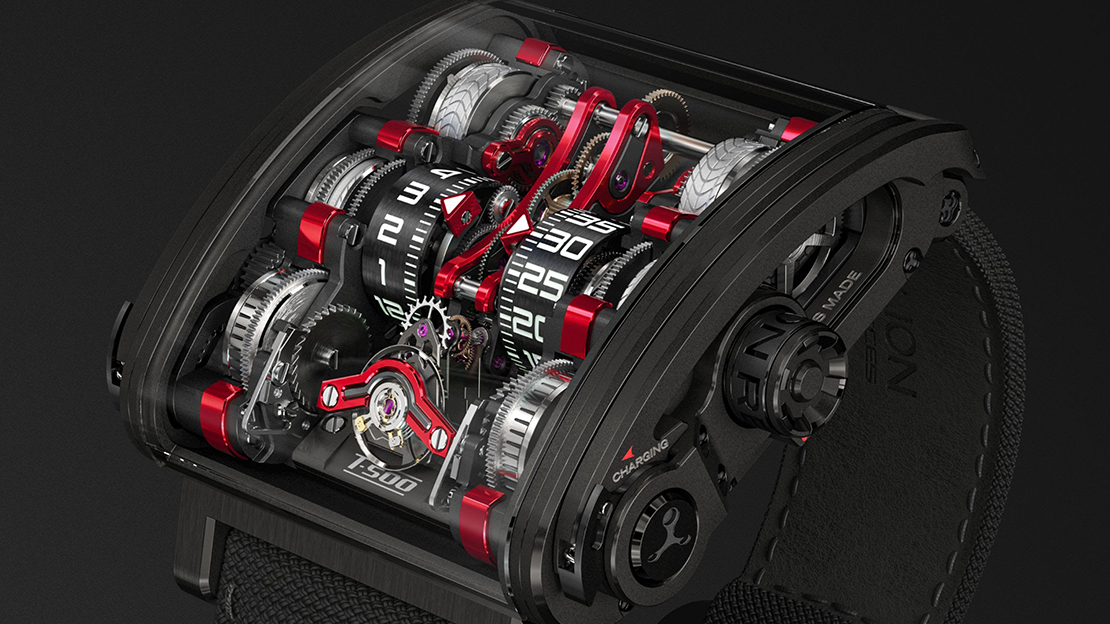 With the T-500, performance enters a new dimension. It takes the form of a watch with an audacious design and uncompromising mechanics.

In 2010, with the T-1000 watch, Rebellion Timepieces shakes up the codes and conventions of traditional watchmaking and at the same time signs its first achievement. Its sculptural titanium case (46.7×46.9×19.5mm), born under the inspired pencil of Eric Giroud, integrates a revolutionary manual winding movement. The caliber with double inclined balance has a record power reserve of 1,000 hours! Six barrels are powered in parallel via a central transmission shaft driving two chains, and discharge in series to provide linear power to the regulator. The hours and minutes are displayed in a new way using two rollers.

This year, Rebellion Timepieces proves its ability to innovate with the T-500. Its direct affiliation with the T-1000 is unmistakable: a case with an original and stylish architecture is associated with a high-performance caliber with 450 hours of power reserve!

Under the curved sapphire crystal, an impressive mechanical display is revealed. The movement, designed by Concepto as a kinetic sculpture, adopts the same architecture as the T-1000 with its inclined balance. Assembled with 380 parts, this vertical movement, still hand-wound, is composed of six barrels that are recharged with energy using a lever. Each of them is decorated with a tire engraving that evokes the strong link between Rebellion Timepieces and motor racing. The hours and minutes are still displayed on parallel rollers.

In addition to its long autonomy, the caliber also gains in precision compared to the T-1000 thanks to the frequency of its balance which increases to 28,800 vibrations per hour.

The eloxed movement covers come in a choice of five colors: blue, red, green, orange and black. Their presence enhances the design of the rectangular case, in titanium or black DLC titanium, topped with a round sapphire crystal. For a comfortable wear, the T-500 comes with a leather or rubber strap closed by a folding clasp.