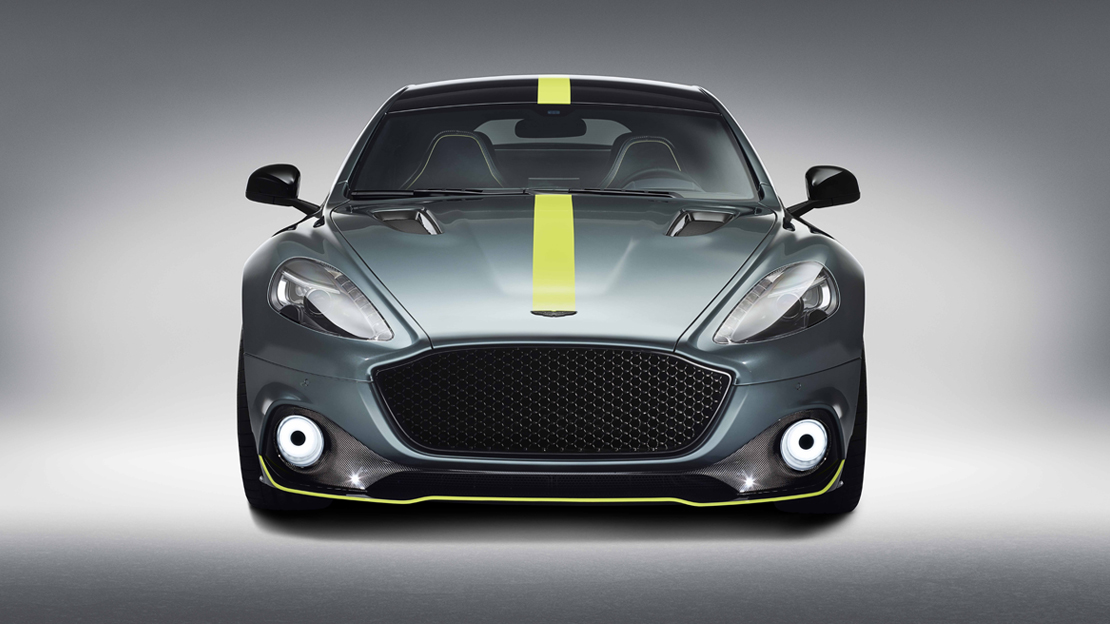 Le Mans is the iconic 24-hour race that everyone who is anyone in motorsports aspires to win. Aston Martin aims for a back-to-back win this year, in defense of their 2017 victory. Aston Martin has revealed the limited edition Rapide AMR car, (AMR of course meaning Aston Martin Racing), the production version of the concept car shown in Geneva in 2017.

The Rapide AMR is a sports car with racecar aspirations. The car is confortable enough to get the team to the circuit and then get on the track and race. As Aston Martin President & Chief Executive Officer, Dr Andy Palmer, explains: ‘AMR takes technology and inspiration from our motorsport programme to amplify the sporting prowess in our road cars which is clear to see in the Rapide AMR, Aston Martin’s most extreme, 4-door sports car. With enhanced performance, sharper dynamics and more powerful design language, Aston Martin has taken Rapide to new and exciting extremes.”

Not much has change from concept car to production car. The large aggressive front grille was kept, and it looks like the Vantage AMR Pro. The difference is while the Vantage Pro was meant strictly for the track, the Rapide was built for the road. The daytime running lights are a nod to the Zagato models. The Rapide AMR aerodynamics are meant to reduce lift and maintain neutral balance. Adding to this is the carbon fibre bodywork, which minimizes the car’s weight. Lighter typically means faster.

The naturally aspirated drivetrain is at the heart of the Rapide AMR, drawn from the Vantage GT12. The Rapide AMR has more power though, thanks to the larger inlet manifolds, dual inlet runners, and the new engine and gearbox calibration. Aston Martin introduces something new with this car – 21-inch wheels, partnered with high-performance Michelin Super Sport tires. The large forged wheels not only look fantastic, they serve a purpose – the multi-spoke design aids in brake cooling. Speaking of brakes, these are carbon ceramic, giving the Rapide great stopping power (critical in car, race or not). The vehicle suspension rides lower, aiding in producing a more focused, agile and dynamic car. These improvements were tested at the AMR Performance Centre at the Nürburgring.

The Rapide AMR is available in three different design schemes, and it’s actually hard to determine which would be your favorite. The Standard and Silhouette schemes both come in four colors: Mariana Blue, Scintilla Silver, Lightning Silver and Onyx Black). The Standard scheme adds AMR lime as accent, while the Silhouette adds a full-length contrasting stripe in China grey or Clubsport White. The Signature scheme has Stirling Green with Lime accents and a Lime stripe to complete the signature AMR look. All the better to look like a racecar.

The interiors reflect the design choices of the exterior. The full-length carbon fibre center console is nice, as are the seats trimmed in Alcantara. The seats have the AMR logos very tastefully stitched in, and each car comes with a plaque. If you feel the need for even more personalization beyond design schemes and color choices, you can request the services of Q by Aston Martin.

The Aston Martin Rapide AMR will be available globally, except for China and Russia. The first customer deliveries are expected in late 2018.