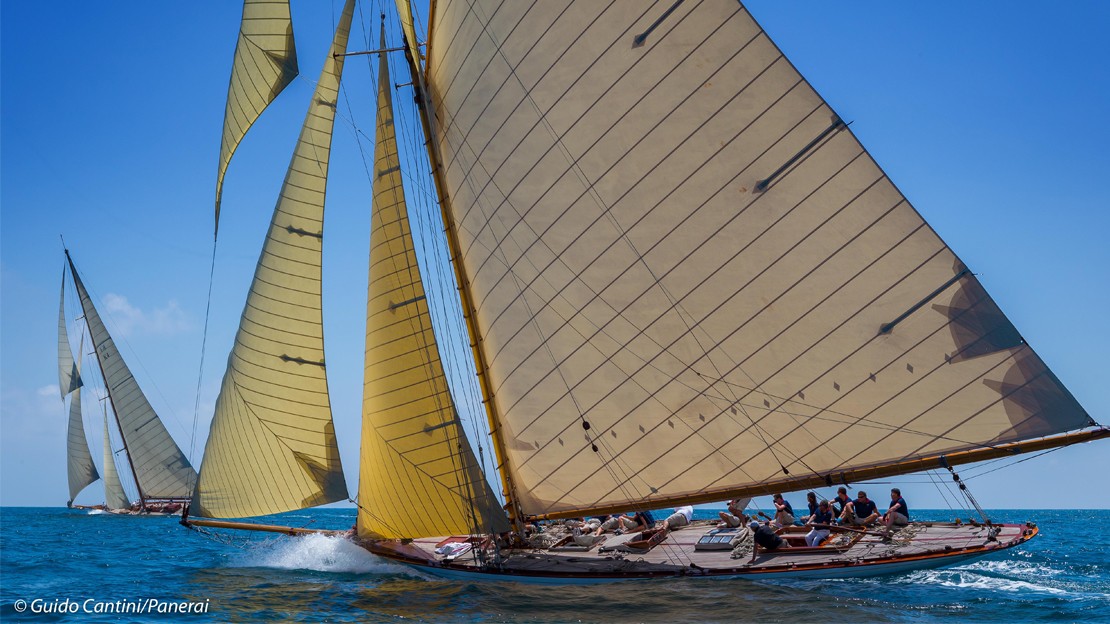 The 23rd edition of Les Voiles d’Antibes, the first round on the Panerai Classic Yachts Challenge Circuit, has drawn to a successful conclusion. The four prestige watches put up as the prizes for the 14th consecutive year by the Florentine high-end sports watch brand were won by Mariska in the Big Boats category, Eva in the Vintage Yachts category, Resolute Salmon in the Classic Yachts category and Tabasco 5 in the Spirit of Tradition category. Lovely sunny days and light breezes saw all four of the scheduled races go ahead also.

The gaff cutter Mariska, an International 15-Metre Class built in 1908 by William Fife in Scotland, held sway in the Big Boats, taking first place in all four races in her class. Behind her were Prince Albert of Monaco’s Tuiga, another International 15-Metre Class built by Fife but in 1909, and Moonbeam of Fife (1903). Also competing in the same category was another great Fife masterpiece, Cambria, launched in 1928, and celebrating her 90th year afloat at Antibes.

With two wins out of her four races, the 17.5-metre Eva, another gaff cutter launched by Fife in 1906, dominated the Vintage Yachts category ahead of Chinook (1916), winner of one race, and the gaff sloop, Olympian, a P-Class built in the US in 1913.

In the Classic Yachts category victory went to Resolute Salmon, splashed in Brittany in 1976 by the Pichavant yard. She won three out of the four races in the Classic Marconi Racer grouping, beating another glorious Panerai circuit favourite, Il Moro di Venezia I, winner of two previous season titles, and Sagittarius (1971). The 10.6-metre Resolute Salmon is considered a revolutionary design and was penned by American Britton Chance who won the One Ton Cup with her in 1976.

With three wins and one second place to her credit, Tabasco 5 took victory in the Spirit of Tradition category for yachts with designs and lines inspired by projects of the past. Tabasco 5 is a 12.42-metre IOR 2 Tonner built in 1981 from triple-cross mahogany planking to a then-highly innovative Joubert-Nivelt design.

The boats that won the individual groupings included Rowdy, a 1916 New York 40 and twin of Chinook except for her Bermudan rig, in the Vintage Marconi A ahead of Jour de Fete and Manitou. Rowdy won three of the four races competed by her class at Antibes.

The 1935 Santana did likewise in the Vintage Marconi B in a hugely successful official debut on the Mediterranean circuit for the former yacht of Hollywood husband and wife stars Humphrey Bogart and Lauren Bacall. The Argentinian 15-metre German Frers-designed Cippino II (1949) made it four out of four in the Vintage Marconi C too.

Last but not least, Lys, a 1956 Sangermani, won the Classic Marconi B grouping while the 11-metre Maria Giovanna II (1968) held sway in the Classic Marconi C. The battle between the eight classic-inspired cruiser/ racer one design Tofinous that came to Antibes for Les Voiles, was won by Pitch.

The Panerai Classic Yachts Challenge continues with its second round, the Argentario Sailing Week at Porto Santo Stefano, in Tuscany, from June 13 to 17.

I Am (Now) Titanium

The GMT Sport emerges in a bold, new character.