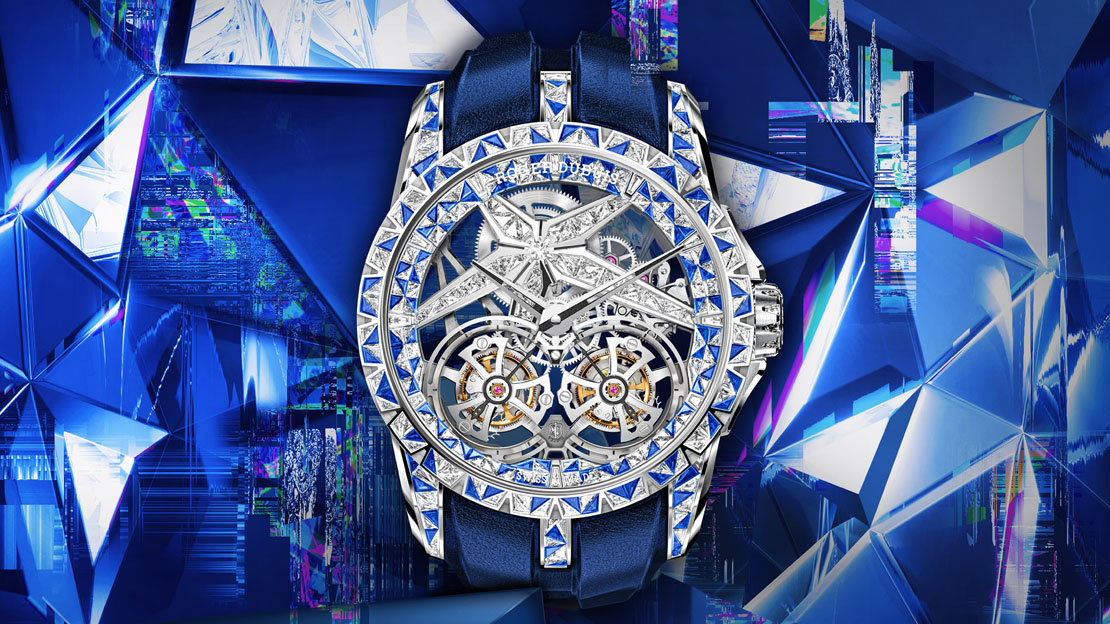 Even for a brand accustomed to extravagance and excessive use of opulent materials to drive home the manufacture’s addiction to vanity and risk-taking, Manufacture Roger Dubuis’ Excalibur Superbia (Latin for pride) rises above all. The ultimate example of the Maison’s unshakable pride and excess, Excalibur Superbia is crafted in palladium-enriched white gold and set with exactly 600 precious white diamonds and blue sapphires. This offers a truly extravagant (and ideal) housing for Roger Dubuis iconic signature calibre: a brand-new DOUBLE FLYING TOURBILLON movement, the RD108SQ, inspired by its legendary version launched in 2005, the first double-regulator calibre connected with a differential, built up in volume and adorned with a diamond-set star. For the RD108SQ, paying tribute to Roger Dubuis’ status as a forerunner in the field of this extreme complication mastered by few other watchmakers, in the RD108SQ, the double flying tourbillon is transformed into the ultimate iconic signature.

While the aforementioned details may seem to define why the watch is considered a hyper horology timepiece, the excessiveness of the Excalibur Superbia comes from neither its alloy or stone count. What makes it truly an off-the radar piece is the fact that every stone set on the flange, bezel, case and the crown is tetrahedron shaped and assembled with an invisible setting on the curved surfaces, the hardest way to set a stone because an invisible setting is damn near impossible to accomplish when done to a curved surface. To complicate matters further, each and every glittering stone in the Excalibur Superbia is a tetrahedron, a shape requiring boundless cutting skill as its extreme thinness greatly increases the risk of breaking. Not only has no jeweler or watchmaker ever dared to set a piece in this way, certainly no one has ever been crazy or ambitious enough to do it on a masculine watch. Until now.

The concept of impossible is nothing if not meaningless at Roger Dubuis where the next challenge is simply around the corner, so not only did every stone have to be tetrahedron-shaped, the pattern was designed so that all 238 stones featured in the case of the Excalibur Superbia has a different shape and is thus singular. Adding insult to injury, the design also demanded that the long-suffering craftsmen of the Manufacture would at times have to deal with the points of six or seven stones meeting simultaneously in the same spot.

The test of Roger Dubuis setters’ skill does not stop here, however. The final sting in the tail of the Excalibur Superbia comes with the grooving – the last step required to complete the invisible setting with the previously perfectly triangulated stones. This is so hard to do on a tetrahedron stone that it took each gem setter an average of 30 minutes to do a single groove, corresponding to 900 hours for this operation alone on all three sides of the 600 diamonds, plus 420 hours to set the case and bezel – and that’s without even counting the stone-cutting.

The entire process takes about three times longer than the same case set with baguette-cut stones. And just for good measure, reaching the very pinnacle of complexity Roger Dubuis-style, in the Excalibur Superbia, this already painstaking, groundbreaking process has been entirely achieved on a curved surface.

One final detail drives home the Excalibur Superbia creators’ mindset focused on living life to the fullest and with the greatest intensity. In the grand tradition of memento mori pocket watches, and as a reminder that this time on earth is short and must be filled with the unfettered pleasure, madness and freedom, the movement of the Excalibur Superbia is secretly inscribed with the words Memento mori, a detail that will henceforth feature on each Hyperwatch created by the Maison. Because to remember you must die is to remember you must live – and is unquestionably the most exciting way to experience hyper horology.