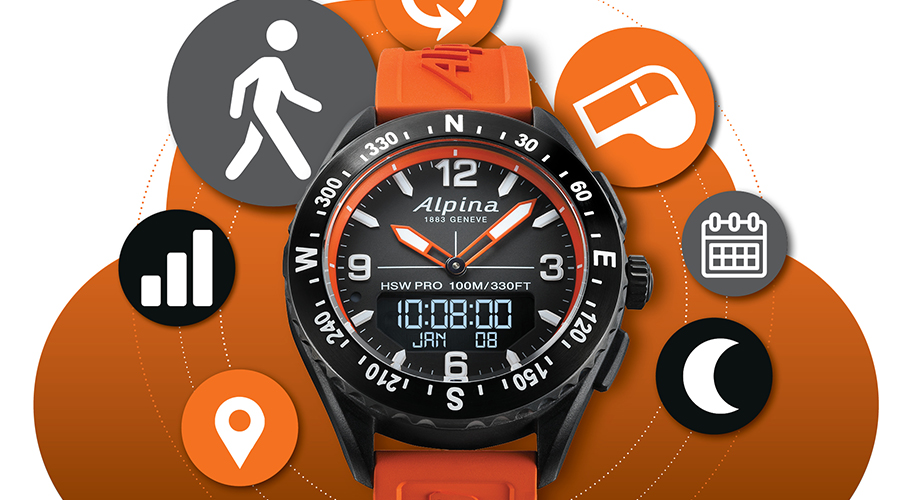 THE acquisition of Frederique Constant by Japan’s Citizen Holdings meant the other brands under the Swiss watchmaker — Alpina and Atelier deMonaco — also now belong to Citizen. Not included in the sale was MMT, or Manufacture Modules Technologies, which was spun off as an independent company from Frederique Constant in 2016, a year before Citizen’s purchase was consummated. In 2015, it was MMT, still under Frederique Constant, which developed the module, apps and other services for the Frederique Constant Horological Smartwatch, as well as similar devices for Alpina.

So it’s hardly surprising that Alpina continues to function with MMT-developed apps and services — the companies are even both based in Plan-les-Ouates in Geneva. And now, Alpina’s own Horological Smartwatch can link to MMT’s SwissConnect cloud service.

The service addresses Alpina’s growing line of connected timepieces as it allows users access to cloud-based data overview and storage. SwissConnect can be reached via a web page, on which apps (including those for MMT 365 and AlpinerX), data, widgets and dedicated dashboards are available to Alpina smartwatch wearers. SwissConnect Analytics also promises to support future apps.

The premise here is that the SwissConnect cloud portal acts as a hub for all connected mobile applications, as well as centralizing data storage in one “place.” Users need only one login name and password for them to manage all their SwissConnect data.

They can also connect external apps, like Strava, Fitbit and Runkeeper, to export and display data in their preferred SwissConnect mobile app. A personal dashboard will let them check their stats, as well as track their progress.

Alpina says users’ data are stored on servers in Switzerland and are covered by Swiss privacy laws and the General Data Protection Regulation. Switzerland, the watchmaker assures, has one of the best privacy protection systems anywhere, and the SwissConnect servers are as secured as those dedicated to banks. As an added measure, SwissConnect enables smartwatch users to correct, export or permanently delete their personal information from the servers.

The SwissConnect cloud portal can now be accessed by Alpina and SwissConnect users at https://www.swisscloudportal.com. They need only to sign in with their SwissConnect e-mail and password before they can start walking on clouds.