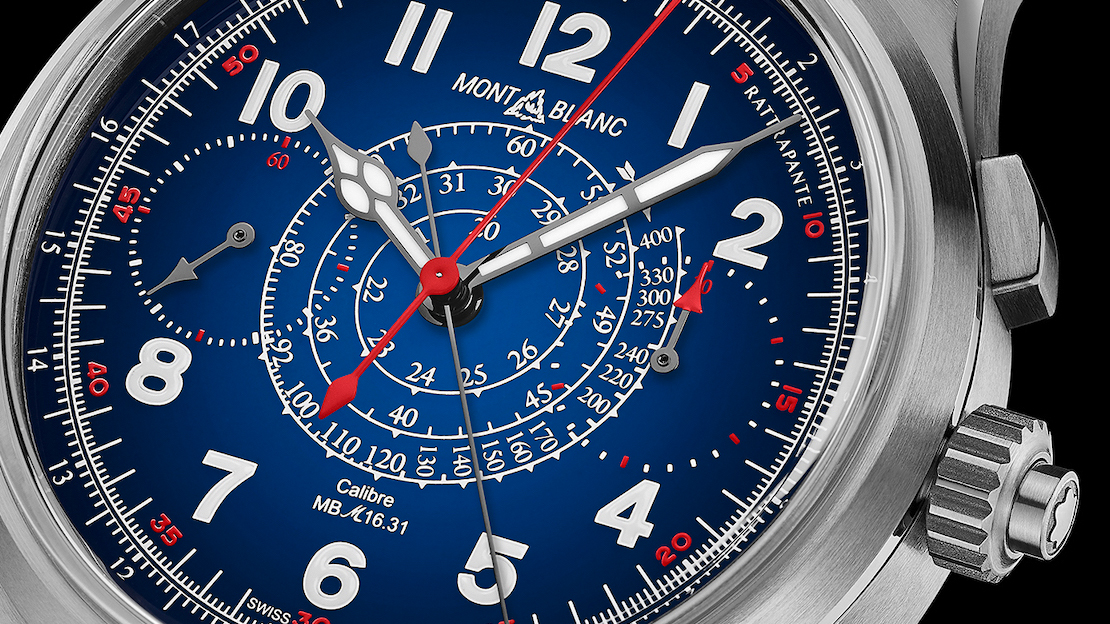 (Editor’s note: The Only Watch charity auction raises funds to draw attention to — and find a cure for — Duchenne muscular dystrophy, or DMD, a genetic disorder which causes the gradual loss of basic motor functions, including the ability to walk, among children. The Only Watch auction, which supports the Association Monegasque contre les Myopathies, is on its eighth edition this year. It has raised more than 40 million euro in its previous seven outings. Watches donated to the 2019 edition will start their world tour on September 25 from the Monaco Yacht show. These will travel to Dubai, Paris, London, New York, Tokyo, Singapore, Hong Kong and Taipei. The auction, organized with Christies, will take place on November 9 in Geneva.)

For this noble cause Montblanc’s donation, joining the other one-off timepieces meant for the charity, is the unique 1858 Split Second Chronograph Only Watch 2019. Instantly marking out the Only Watch piece from the 100-watch limited edition run are its satin titanium case, instead of the “regular” watches’ bronze ones, and a dial in degraded blue agate rather than in black.

Still defining the dial though is a telemeter scale on the periphery of the dial, which is just like the ones found on Minerva chronographs of yore. Well, it is historic movement- and watchmaker Minerva which Montblanc is honoring in the 1858 Collection — 1858 is the year during which Minerva officially came into being. A telemeter scale, as geeky watch guys are all too aware of, allows one to measure how far away a particular visible and audible occurrence is — say lightning and thunder. During wars, people also used this to determine their distance from a shell explosion. It’s useful, all right.

Also retained in the 1858 Split Second Chronograph Only Watch 2019 is a tachymeter scale spiraling at the center of the dial — a “colimaçon,” or snail shape. This scale allows for measurements of elapsed time for up to three minutes rather than just 60 seconds, as traditional chronograph scales circling the dial do.

While the numerous red accents on the dial of the 1858 Split Second Chronograph Only Watch 2019 remain, the vintage-y beige touches have gone in lieu of white — the hour numerals, for instance. The cathedral hands are now also accented in silver rather than in gilt, and the central chronograph second hand has turned red (the split second hand is gray). All this transformed the aesthetics of the watch from being overtly antique into evocatively vintage. If anything, the resulting look is arguably a better match to the case’s contemporary, chunky dimensions — we’re talking 44 millimeters wide here, a hair over 14.5 millimeters thick.

The case is this expansive for a reason. Housed within it is Montblanc’s manufacture cal. MB M16.31, a handwound monopusher chronograph ticker modeled after the original Minerva cal. 17.29 of the 1930s. What this Minerva movement was chiefly used for was in pocket watches. Montblanc’s take on this measures a full 38.4 millimeters across, 8.13 millimeters thick. Yes, it is huge.

Like the antique movement, the cal. MB M16.31 is a split-second chronograph, meaning it can time two events that start together but do not end at the same instant. The chronograph start, stop and reset functions are activated by a pusher piercing the winding crown while the split-second function works via a separate button at 2 o’clock. The chronograph relies on two column wheels and a horizontal coupling setup.

The 25-jewel movement operates at a retro 18,000vph and has a 50-hour power reserve. It is lavished with hand-finishing work; Cotes de Geneve striping, circular graining, beveling. It has Minerva’s signature V-shaped chronograph bridge. Oooh, it is gorgeously, gorgeously decorated.

What more, the watch it ticks is a one-off.