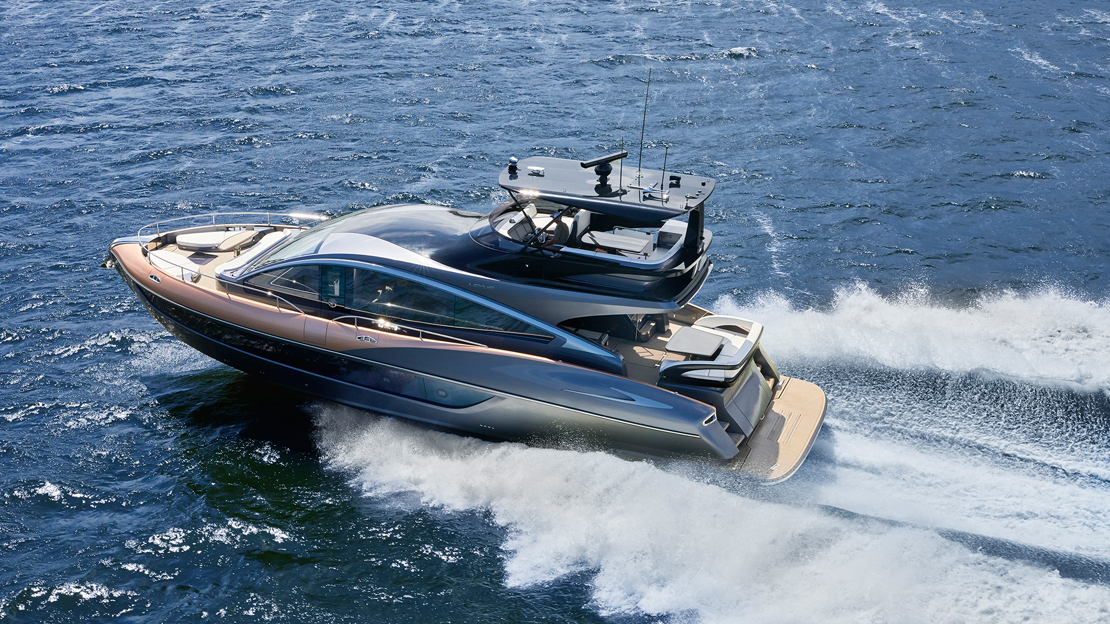 TWO years ago Lexus dipped its toes in the water by commissioning the one-off, 42-foot Sport Yacht Concept. In September last year, boosted by favorable response over its watercraft study, Lexus announced it would bring to market the LY 650 luxury yacht in mid- to late 2019. Earlier this year, the company teased photos of the LY 650’s production version, reminding all that the yacht is on its way.

The carmaker — and now established design deity — in Boca Raton, Florida premieres the production version of the LY 650 (sales will start in end-October). Calling it the “new embodiment” of Lexus’s “Crafted” philosophy, which relates to an “attention to detail and anticipatory hospitality [as] applied in every possible aspect” as the brand transcends the automotive experience, the LY 650 is a uniquely, highly styled yacht. Think of this a mix between a Lexus flagship coupe and an Intersect by Lexus luxury space on water. Dynamic and architectural at the same time.

A collaboration with Italian yacht design studio Nuvolari Lenard led to its designer vibe inside and out. To make sure it performs as excellently as it looks, the yacht rides on a light and highly rigid composite hull that combines carbon fiber-reinforced plastic and glass fiber-reinforced plastic. It is kitted with LY-Link, an advanced connectivity technology for boating that shares timely information and controls various functions.

The LY 650 is crafted together with Marquis Yachts of Pulaski, Wisconsin. With the start of LY 650 manufacturing, Marquis Yachts has applied the famous Toyota Production System in its processes to improve efficiency and quality. The yacht stretches 65.5 feet long with a beam nearly 19 feet wide. It has a pronounced bow, curved deck accents and imposing aft hips. Its rising and falling roofline, which flows into the rear, recalls that on Lexus coupes. The premiere yacht features an optional two-tone color scheme, which only highlights its unique form. Metallic accents on the bow, side windows and the vessel’s L-shaped air intakes all speak Lexus’s design language.

The salon’s layout features dual captain’s seats and sofas set forward, and a galley set aft. Below the salon are three berths boasting 6.6 feet of headroom, each with a private head with a shower. An available custom Mark Levinson Surround Sound System with subwoofers creates an immersive concert hall-like acoustic space in the salon. “Takumi” craftsmanship, meanwhile, is evident in the stainless-steel deck fittings custom-made for each vessel in-house, bespoke real wood trim and furniture, and hand-sewn seat covers.

Propelling the LY650 are twin Volvo Penta IPS marine engines. Customers can spec whether they want a pair that makes 1,350hp each, 1,200hp or 1,050hp. Because the powertrain is integrated into the underwater-hull shape achieved through computational fluid dynamics modeling, the LY 650 promises to not only be quick and agile, but also miserly on fuel. Plus, it is reckoned to be stable as well. Its captain is provided with an array of piloting-support functions, including joystick control, fixed-point position-holding at sea, and an auto-flap function.

Toyota Motor president Akio Toyoda sums it best; “The LY 650 symbolizes the challenge taken by Lexus, which aspires to be a true luxury lifestyle brand, to venture beyond the automobile.”

A luxury yacht is an amazing means to sail toward this goal.