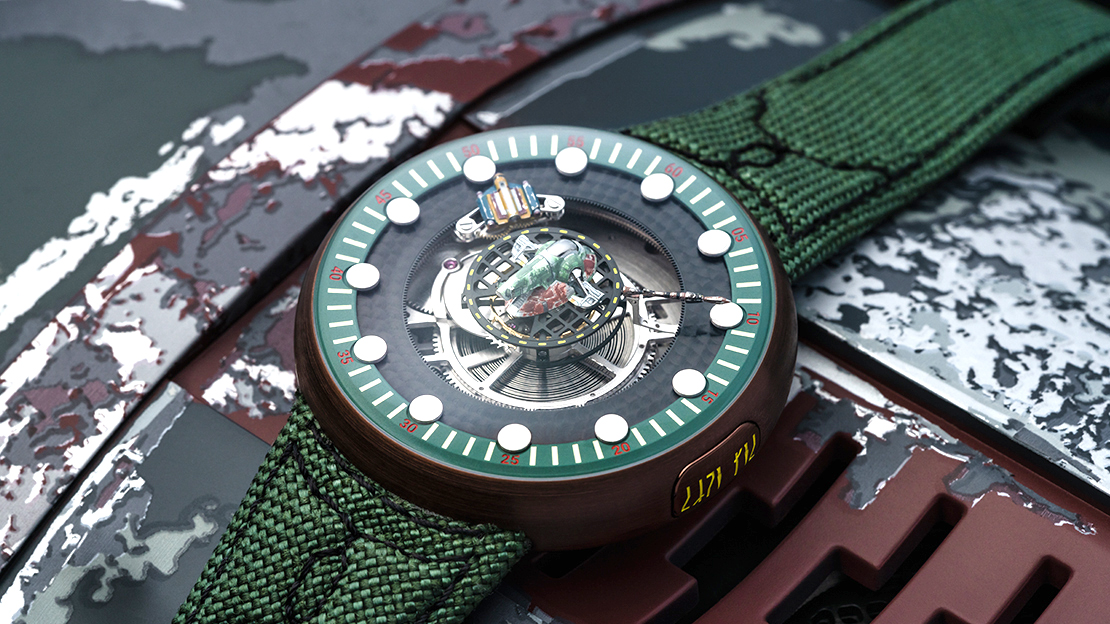 One of the most enigmatic characters in the Star Wars galaxy has inspired Kross Studio’s latest creation, in collaboration with Lucasfilm. The Swiss design studio is proud to reveal a new and limited edition of ten Boba Fett-inspired collector sets, each complete with a numbered, manual wound Boba Fett-inspired central Tourbillon timepiece and a watch display by EFX, inspired by Boba Fett’s famed starship.

A timepiece for the Galaxy’s most famous bounty hunter
The central tourbillon is now indelibly associated with Kross Studio. Here, the mechanical complication is showcased within a 45mm grade 5 titanium case, coated with chocolate PVD. Kross Studio engineers reached another level by undertaking the challenge of manufacturing a miniature starship on its landing platform at the top of the tourbillon’s cage.

Expert craftsmanship and incredible detail echo his highly equipped starship
Composed of eight pieces, each miniature tourbillon resembling Boba Fett’s firespray starship has been produced at Kross Studio and manufactured in CNC machines. Each piece has been meticulously engraved and hand painted to mimic the weathered appearance of Boba Fett’s ship as it appears in Bespin™ at Cloud City in the Star Wars film saga. The level of detail is incredible, and it highlights the unique savoir-faire perpetuated by artisans in Switzerland. It took 90 hours to make each of the ten pieces that are based on the starship and each one is a unique piece.

Reading time
Kross Studio has employed a unique peripheral format for reading the hours and minutes through a planetary gear system that orbits 360 degrees around the tourbillon. A 12-factor gear ratio allows the planetary minutes system to empower the progression of the hours. In order to optimize the movement’s efficiency as much as possible, the hour and minute display system is fixed on two very wide and high-precision ball bearings. The hour hand is inspired by Boba Fett’s jetpack and the minute hand by its rocket, two iconic items that the bounty hunter carries permanently.

The clarity and symmetry of the Boba Fett-inspired Tourbillon dial belies the complexity of its manual-wound central tourbillon movement, which is composed of 220 parts. Each of the ten numbered timepieces was designed and assembled within the Kross Studio atelier in Gland, Switzerland.

No visible crown
No visible crown impedes the case’s perfect symmetry thanks to Kross Studio’s ingenious D-ring crown system, placed instead on the case back. The barrel’s mainspring is wound by lifting the D-ring on the case back, which is turned like a key, offering a more intuitive and more efficient user experience than a traditional crown. The timepiece offers a maximum power reserve of five days. Time-setting is just as simple, completed by pressing the “Time Set” push button at 3 o’clock while simultaneously turning the case back D-ring in either direction.

It made perfect sense to take inspiration from Boba Fett’s iconic starship and to make a watch display that can carry the Boba Fett Tourbillon in its cockpit while being displayed as an art piece in a select few collectors’ rooms.

Each EFX Boba Fett’s starship watch display is the same scale as the actual filming model as seen in Star Wars: The Empire Strikes Back™. They are made with an aluminum and acrylic substructure with the detail parts cast in resin. Each detail piece is individually cast from a master made from the same model kit parts used to make the screen used prop and then carefully finished and painted by hand. The parts of the EFX Boba Fett’s starship-inspired watch display were developed with a thorough review of the screen used prop.

The starship-inspired watch display comes affixed on a platform resembling a ship landing pad and made of wood in Kross Studio ateliers.

Boba Fett leaves no detail to chance, a quality that cemented his legendary status for legions of Star Wars fans. Kross Studio shares his consummate quest for precision, and with each subsequent design, the brand secures its iconic status in our galaxy. Like the Death Star™ Ultimate Collector Set before it, this 10-piece series of Boba Fett Collector Sets will never be produced again, joining the pantheon of the galaxy’s most highly sought Star Wars collectibles.

Boba Fett collector sets ($120,000 USD each) will be available for individual sale at kross-studio.com, or through official partners and select authorized retailers.