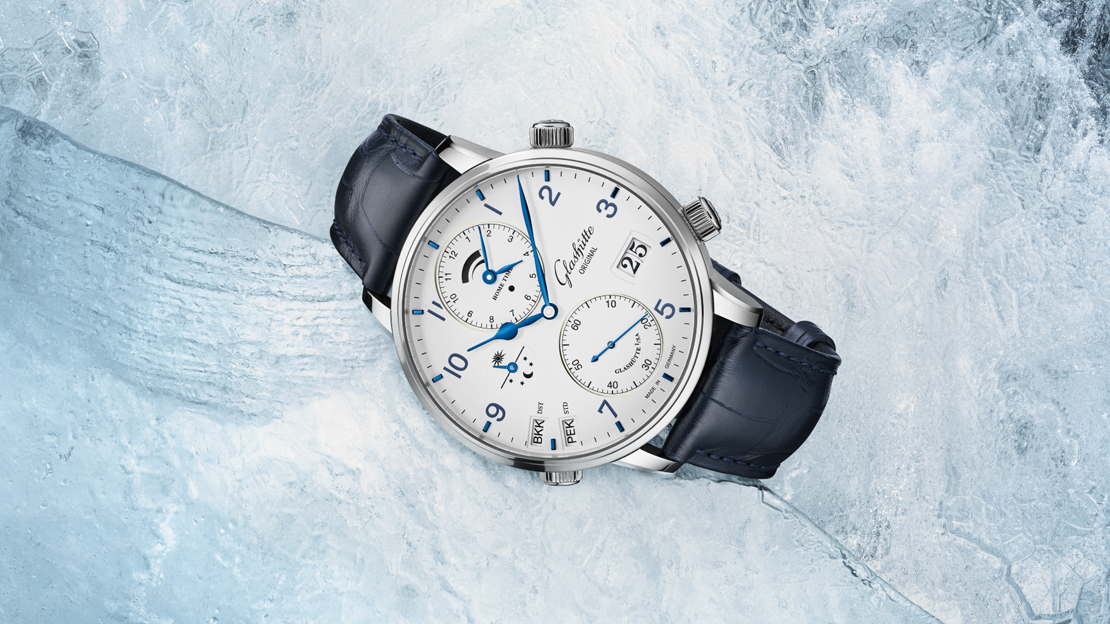 WINTER need not be gray and dreary. Not if Glashutte Original is correct in pitching two of its timepieces as evocative of snowy landscapes and crisp sunny skies. Neither is entirely new, but seen in a wintry light they actually come across as seasonally fresh.

The first in this pair is the Senator Cosmopolite, which earlier this year came wrapped in a 44-millimeter steel case rather than in white or red gold. The other is the PanoMatic Luna, a glittery feminine piece that’s still very much cut in the mold of serious watch-making standard.

Discarding its precious-metal case did not alter any of the Senator Cosmopolite’s technical prowess; it remains as one of the most innovative world-time wristwatches in horology. The piece does away with the list of 24 cities and time zones notable watchmakers actually use as both design and functional elements. The Senator Cosmopolite goes a different direction and trumps standard world-time complications in the process by listing not only all 24 time zones that successively deviate from GMT (or UTC, there is no difference) by an hour each, but also the eight others that are offset by 30 minutes (India sticks out as one of these), and the three more that have decided 45 minutes is reasonable for them (Nepal, for instance).

Now, had Glashutte Original chosen to list all these time zones (and the spots of the Earth which adhere to them) on a wristwatch, the resulting display would likely have been messy. So what the watchmaker did was put two simple apertures flanking the 8 o’clock marker. Displayed in them are the three-letter IATA codes assigned to a particular city. The 24 ones commonly used in world-time wristwatches are listed in black, while the abovementioned 30-minute offset locations are in blue, the 45-minute ones in red. Why the two apertures? The one on top reads out Daylight Saving Time (labeled DST), the other one the standard time (labeled STD).

A simple subdial at 9 o’clock indicates in pictogram whether it is day or night, negating the need for a conventional two-color 24-hour scale. Fact is, there is no number higher than 12 (apart from the date, obviously) found on the Senator Cosmopolite’s dial. The blued central hour and minute hands of the main dial tell the local time. Home time is displayed on a subdial at 12 o’clock (which also houses a power reserve meter). A small second subdial resides below the one for home time. Really, this piece is pretty comprehensive.

Powering it is Glashutte Original’s in-house, self-winding cal. 89-02 whose intricate finishing, on display through a sapphire crystal caseback, comes in stark contrast to the white-and-blue motif of the dial opposite it. An off-center, openworked rotor in 21-karat gold allows as much view as possible of Glashutte Original’s hand-finished bridges and signature duplex swan-neck adjustment mechanism. The cal. 89-02 spins at 28,800vph and has a power reserve good for 72 hours. Its sophistication is what lets the Senator Cosmopolite’s dial to be as pure as the driven snow.

No less elegant is the PanoMatic Luna, even if it pursues a different tact in watch-making excellence. For instance, the piece flaunts 83 diamonds totaling 1.09 carats, making it about as dazzling as ice crystals. Sixty-four of these white brilliant-cut diamonds line the bezel of the watch’s 39.4-millimeter steel case. The dial’s nine hour indices (three were deleted to make way for the overlapping small second subdial) each get a pair of diamonds. Combined with those on the bezel then, the number adds up to 82. So where is the remaining one? It sits not on top of the watch but on its side — on the crown, specifically, where this three-millimeter gem is the centerpiece.

Adding more sheen (and which genuinely lends the PanoMatic Luna a celestial quality) is the iridescent  blue mother-of-pearl dial, which naturally varies in hue, texture and topography throughout its surface. So while the layout of the dial furniture is unmistakably Glashutte Original’s, the PanoMatic Luna has a vibe all its own.

Ticking beneath all this fancy features is a movement that is just as lavishly decorated — the in-house self-winding cal. 90-12, which is also fitted with the swan-neck mechanism (though this is not displayed on a cutout on the dial, as the inverted version of this has been shown in some Glashutte Original pieces). Sharing many components as those found on the brand’s manufacture movements, the cal. 90-12 in the PanoMatic Luna also endows the watch its moon phase complication, which explains why it is named as such in the first place. Needless to say, this function should be especially lovely to gaze at come the winter solstice (it falls on December 22 this year, by the way).

The new 2021 Grand Seiko novelties. And we love the new blue water GMT.

Decked Out in Bronze and Ceramic

Italo Fontana’s passion for scuba diving is embodied in this latest iteration of the Sommerso collection.

Patek Philippe brings us new models of the Twenty-4, perfect for the modern women, day through night.

Ring in the Lunar New Year with Bvlgari’s Captivating Creations

A new Lunar Year is upon us, and Bvlgari offers many delightful and captivating options. Let’s take a peak and plan our New Year look.