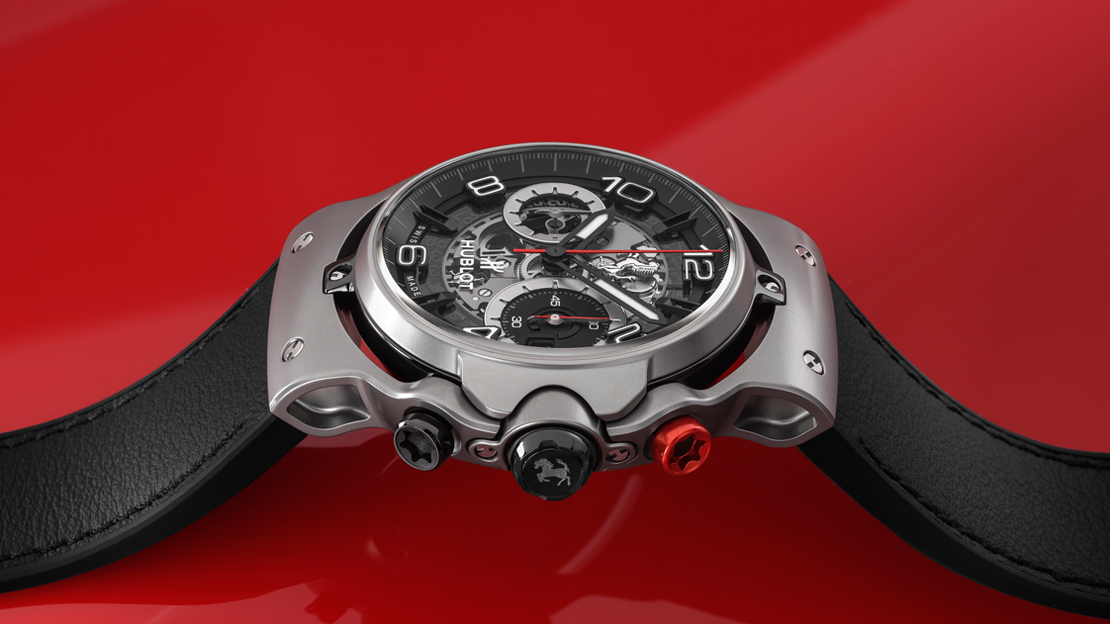 BY MOST indications, Hublot has broken the Ferrari curse; the two extroverted brands have been together since 2011. They put out their first collaborative pieces at the 2012 Baselworld in the form of the Hublot Big Bang-based Hublot Ferrari collection. This relationship progressed with releases nearly every year, with the collection appropriating other Hublot models.

This year the pair might just have composed their best hit yet with the Classic Fusion Ferrari GT. Penned together with Ferrari design head Flavio Manzoni, the latest collab piece comes in a choice of three versions each defined by type of case material: carbon 3D fiber (limited to 500 examples), 18-karat gold “King Gold” (limited to 500) and titanium (limited to 1,000). Carbon 3D fiber, Hublot explains, is a three-dimensional woven composite with polymer matrix. The material has never been used in watches, according to the brand. All the cases are 45 millimeters wide.

While seemingly as overwrought as previous Hublot Ferraris at initial glance, the Classic Fusion Ferrari GT is actually sedate at closer inspection — only its skeletonized dial makes it look busy. Its name may say “Classic Fusion” but the Classic Fusion Ferrari GT is different from this Hublot line, and is quite a departure from most Hublots in the sense its bezel does not appear as separate from the case, and nor are the case’s and bezel’s edges angular. In fact, there’s a certain organic, flowing quality to their design.

The cavities for the chronograph pushers and crown reveal their rounded protuberances from the dial side rather than the back (like in many chronos). And though the “lugs,” also softly contoured and drooping, may add some heft visually, they are actually hollow when viewed from the side. The screws (or bolts) on the case and lugs hint of automotive design. The crown and pushers appear machined, like dashboard buttons (one pusher is red, too). The bezel develops a “hood” that go over a section of the crown’s tube, visually “connecting” the bezel to the case in a way previous renditions of Hublot Ferraris could not.

The Classic Fusion Ferrari GT’s dial, despite its numerous elements, remains tidy. The numerals “float” over a ring on which the asymmetric sub-registers are mounted. In the carbon 3D fiber version, a red track accompanies the red second hand and the red hand and numerals on the 60-minute counter at 3 o’clock. The Prancing Horse logo, displayed at 12 o’clock, blends with the mechanical bits underneath.

Well, the straps of the Classic Fusion Ferrari GT are automotive-inspired as well. These come in black rubber lined with Schedoni leather, just like the seats of some historical Ferrari racecars.

Beneath the structure of the Classic Fusion Ferrari GT is Hublot’s UNICO cal. HUB1280. Basically the brand’s V12 engine, this self-winding movement is Hublot’s second in-house chronograph calibre. It has a flyback function, so the chronograph can be restarted even while it is running, and relies on a column wheel setup. It oscillates at 28,800vph and has a generous 72-hour power reserve. Its rotor evokes a three-spoke steering wheel, and is adorned by a Prancing Horse logo in the middle. Most of the mechanical bits of this engine are displayed behind a glass cover.