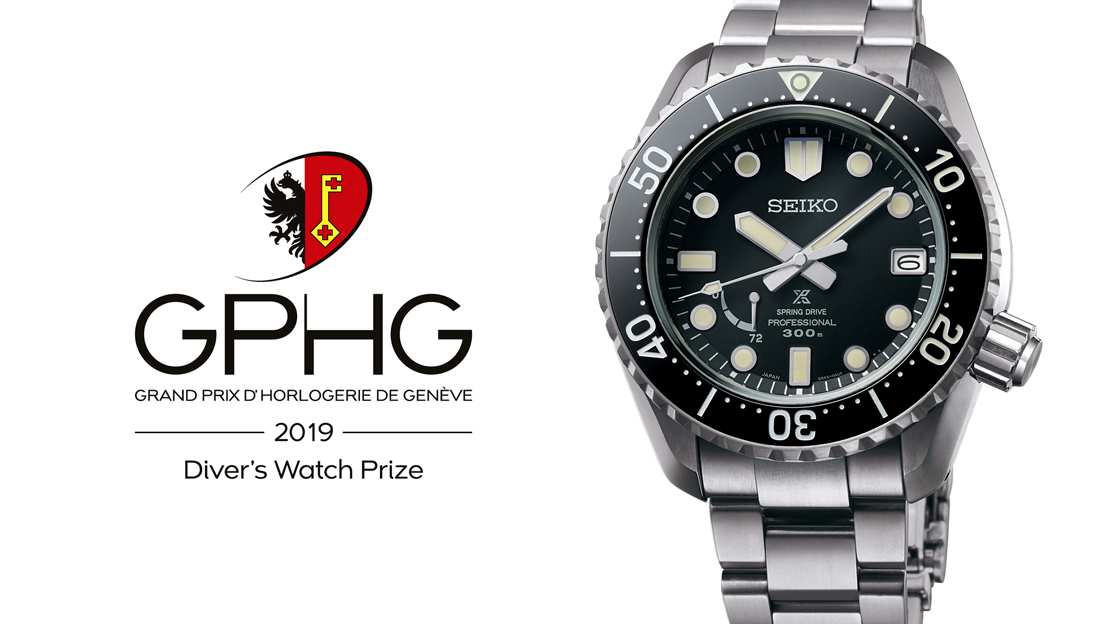 The 2019 Grand Prix d’Horlogerie de Genève is an event meant to bring focus to Swiss-designed horology. There are fourteen prizes awarded for specific categories and five other prizes also awarded for a range of other horological achievements. A jury of 30 watch and luxury experts meticulously pores over the selections to short-list watches for each category. There were six watches short-listed for the best diver’s watch category, with the Seiko Prospex Line Diver emerging as the winner. Akio Naito, Director and Senior Executive Vice President of Seiko Watch Corporation, was present to accept the award in Geneva.

Seiko first began releasing a diver’s watch in 1965, and since then they have developed many a fan-favorite timepiece. Men and women, whether professional divers or adventurous explorers, seek out these Seiko dive watches. The 1968 Seiko Professional Diver’s watch is a precious timepiece that was recreated in 2018, winning the GPHG Sports Watch Prize.

The 1968 Seiko Professional Diver’s watch has once again undergone recreation resulting in the Prospex LX line Divers watch. LX is key in this, as it pertains to the Latin word for light. The watch is designed to reflect light off of its broad, flat, Zaratsu-finished surfaces on the case. The watch is a stunning combination of old and new. Old in that it stays faithful to the original aesthetic and new in the modern feel brought about by the use of Seiko’s advanced 5R Spring Drive caliber. This caliber provides precision and shock- and temperature-resistance, and is perfect for all of our adventure-seeking pursuits. The watch has been worn in the most trying environments on the planet, such as Mount Everest. It has reached heights beyond the planet, when it was taken to the International Space Station and worn during a space walk.

Ken Okuyama was the perfect choice for this collaborative effort. He brought extensive design expertise to the table (rather, the dial) having worked as a Chief Designer for General Motors, a Senior Designer for Porsche AG, and a Design Director for Pininfarina S.p.A. His design portfolio includes motorcycles, furniture, architecture, and yes, robots. Okuyama explains his collaboration clearly, “My aim was to take the unique inheritance and integrity that Seiko has built in sports watches over the decades and to bring them alive in a design that has simplicity, harmony, power and presence. The Prospex LX is a true Seiko with a thoroughly contemporary feel.’’

The Prospex Line also goes beyond this by offering a special series of all-black interpretations. The cases are treated with a black super-hard coating and the flat surfaces are Zaratsu polished. The clean design becomes slightly more dramatic in the all-black versions. It’s no wonder that Seiko has won a Grand Prix d’Horlogerie de Genève award two years in a row in the sports/diver’s category.