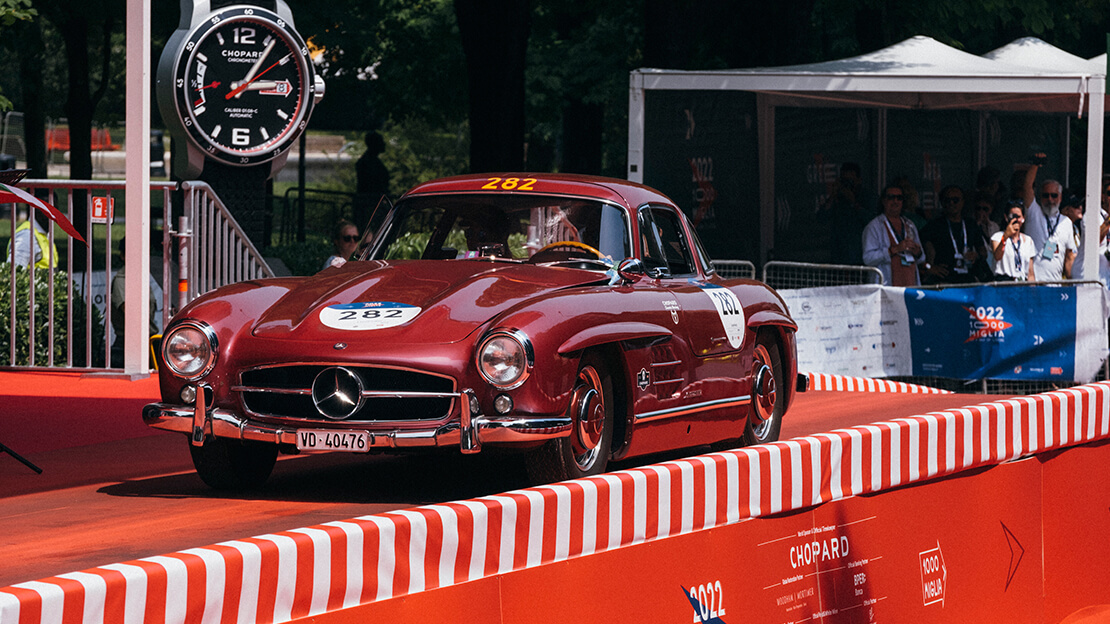 For the 35th consecutive year, Chopard once again proudly took its place as world sponsor and official timekeeper to the 40th edition of the historic 1000 Miglia car race, which occurred from 15 to 18 June 2022. The illustrious race, widely regarded as the most beautiful in the world, saw 404 cars made by 63 car manufacturers on the starting line in Brescia. The 1000 Miglia 2022 was won by Andrea Vesco and Fabio Salvinelli, after travelling the 1,609 km (1,005 Roman miles) route.

The 1000 Miglia 2022 award winners
Crew number 46, formed by Andrea Vesco and Fabio Salvinelli aboard the Alfa Romeo 6C 1750 SS Zagato of 1929, repeated the success achieved in the 2021 edition of the race. For Andrea Vesco, also first in 2020 alongside his father Roberto, there is the double satisfaction of having conquered a 22-year long taboo, previously accomplished by Giuliano Canè who managed to win three consecutive editions of the “most beautiful race in the world” between 1998 and 2000.

In second place, just like a year ago, was Crew number 40, with Andrea Luigi Belometti and Gianluca Bergomi in a 1929 Lancia Lambda Spider Type 221. The third step of the podium went to Crew number 8 formed by Lorenzo and Mario Turelli in a 1929 O.M. 665 S MM Superba 2000. Silvia Marini and Irene Dei Tos, in a 1929 Bugatti T40, won the Ladies Cup.

The intense, challenging 1000 Miglia 2022 required great skill from the crews on 115 Time Trials and 8 Average Trials, with the Capodimonte dirt road trials on the shores of Lake Bolsena proving particularly popular.

On the road again
Despite the massive expansion of Italy’s road network over the past 95 years, the route of the 1000 Miglia has remained remarkably close to that of the original course from Brescia to Rome and back.

‘Clockwise’ was back this year, however, after the anti-clockwise format last used in the 1950s was re-visited in 2021, and after the starting flag dropped at 1.30pm on Wednesday 15 June, the cars headed off from Brescia in one-minute intervals going in order of age (oldest first). Initially contestants made for Lake Garda, passing through the waterside towns of Salò and Sirmione along the way before proceeding to Mantua and on to the first overnight stop in Cervia-Milano Marittima – a total run of more than 300km that, for the drivers of older cars, meant at least six hours on the road.

Day Two on Thursday 16 June, saw the convoy head for Rome on a more arduous, 500-km drive that took them via the remarkable mountain top republic of Norcia before bringing them into the Eternal City well after dark, prior to Friday morning’s rude pre-dawn awakening.

With another 500 km representing a good, nine-hour day during which the cars began their return journey north, Friday 17 June was the toughest day of the event with the route initially travelling inland to the half-way point in Siena before veering west to begin skirting the coast at Viareggio and then heading north-north-east to the challenging Passo della Cisa. Here, the climb ascends to more than 1,000 metres above sea level, before dropping down the other side and heading for a welcome overnight stop in Parma.

Saturday’s fourth and final leg followed a route of little more than 150 km that was punctuated by a stop at the Monza race circuit in order to complete a tricky, timed auto-test – for which the teams certainly needed their Mille Miglia Race Edition chronographs – and the magnificently beautiful city of Bergamo. After this it was (literally) downhill all the way to the finish line in Brescia – where Andrea Vesco and Fabio Salvinelli were declared winners of this memorable edition of the 1000 Miglia.

Mille Miglia 2022 Race Edition: a precision chronograph designed for motor racing enthusiasts
The 1000 Miglia celebrated its 40th reissue and Chopard, its partner and official timekeeper, was once again on the starting grid. As is the case every year since 1988, during an exclusive dinner held at the Albereta Hotel the day before the race, Karl-Friedrich Scheufele, along with Jacky Ickx, unveiled a duo of stunning watches to commemorate the event in the form of the Mille Miglia 2022 Race Editions.

Featuring a 44 mm case in ethical 18-carat rose gold and stainless steel or all-steel versions, this chronometer-certified chronograph picks up all the codes that Chopard instils into the identity of this sporting collection: masculine elegance, mechanical precision, watchmaking performance, racing ergonomics – all dedicated to the beauty of driving.

A family affair
Not only has Chopard been the proud world sponsor and official timekeeper to the celebrated 1000 Miglia since 1988, this year, for the 34th time, the Maison’s Co-President Karl-Friedrich Scheufele joined the 404-strong field of cars behind the wheel of the Scheufele family’s 1955 Mercedes Benz 300 SL, well-known to the 1000 Miglia due to its strawberry-red paintwork.

On 15 June, Chopard Ambassador Jacky Ickx was on the start ramp in Brescia to wave Chopard’s Co-President away as he set off beside his daughter Caroline-Marie, who undertook her second 1000 Miglia after making her debut as co-driver in 2019.

Along with Karl-Friedrich and Caroline-Marie Scheufele, Team Chopard was composed of several prestigious cars, amongst them a wonderful blue Porsche 356 Speedster from 1955 – driven by Chopard Ambassador Romain Dumas, a regular at the 1000 Miglia – as well as a Triumph TR3 Sports from 1957, a Fiat 1100/103 TV Berlina from 1955 and an Austin Healey 100/6 from 1957.