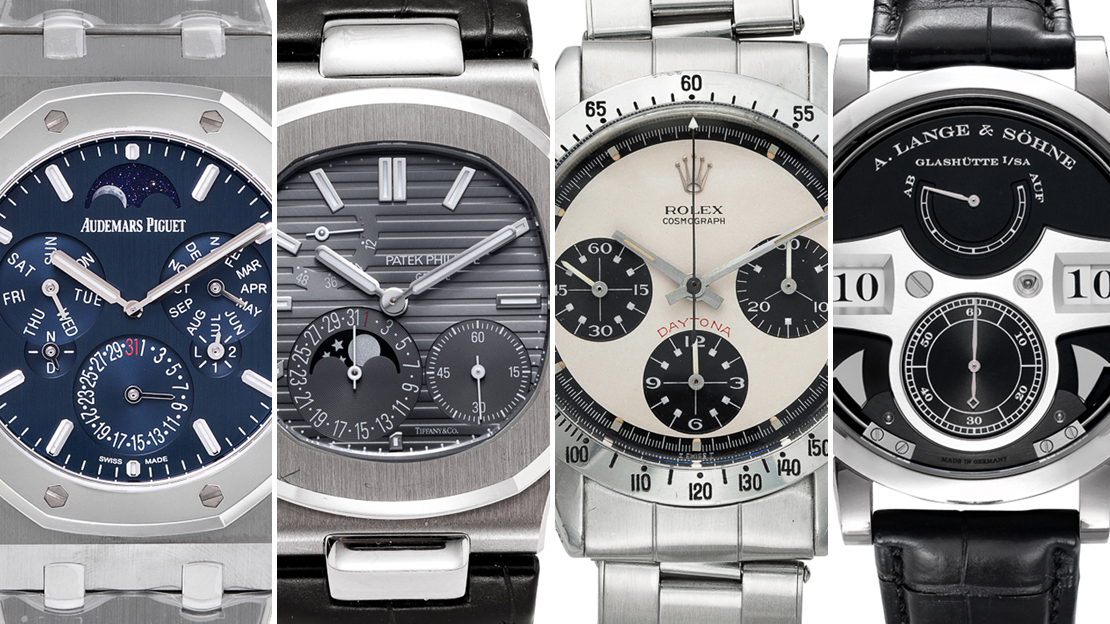 THE selection this time around appears to be a bit heavier on Rolex than usual. But this does not mean there is any lack of interesting Patek Philippe or Audemars Piguet pieces. There are a few compellingA. Lange & Söhne examples, too, as well as a selection of Cartiers. And a Philippine Edition Jaeger-LeCoultre Squadra World Time Chronograph also makes the cut. Plus, what’s a reputable watch auction without a Rolex “Paul Newman” Daytona, right?

All this — and plenty more — can be previewed at the latest edition of Finale Auctions. The timepieces (both men’s and ladies’, plus jewelry) are now on display at the Finale Art File at La Fuerza Compound on Pasong Tamo, Makati. Preview hours are from 10 a.m. to 7 p.m. weekdays, and 10 a.m. to 2 p.m. on October 19. The auctions will take place at 2 p.m., October 20.

Here are some of the more notable pieces up for bidding:

Audemars Piguet Royal Oak Selfwinding Perpetual Calendar Ultra-Thin
This watch traces its roots from the RD#2 prototype unveiled at the 2018 SIHH, which wrote horological history by becoming the thinnest self-winding perpetual calendar at the time. This production model is no less insignificant, having a movement — the in-house self-winding cal. 5133 — that is but a mere 2.89 millimeters thick, all while packing a day, date, month and moonphase display, as well as the mechanism for the perpetual calendar function. The 37-jewel cal. 5133 beats at an unconventional 19,800vph and has a 40-hour power reserve.

On the watch’s blue dial sit white-gold markers. The 41-millimeter-wide case is made from titanium and platinum (as the bracelet also is). Even with a sapphire crystal window, it only measures 6.3 millimeters “thick.”

This very special Royal Oak is brand-new, and is offered in its presentation box and full set of papers.

Patek Philippe Nautilus Moon Phase Tiffany Dial Ref. 5712
Bearing the coveted Tiffany & Co. stamp, this Nautilus Moon Phase was introduced in 2006 (along with a few other models) to mark the 30th anniversary of the Nautilus. Featured on the watch’s slate gray dial are a moonphase display with a date track around it, a small second subdial and a power reserve meter. The hour indices framing these are made from white gold — like the watch’s 40-millimeter case. A black leather strap complements this.

Seen through a sapphire crystal caseback window is Patek Philippe’s self-winding cal. 240 IRM PS LU that is fitted with the brand’s horologic niceties, like a gold micro rotor, Gyromax balance wheel and Spiromax balance spring. This 29-jewel movement spins at 21,600vph and has a 48-hour power reserve.

Rolex Cosmograph Daytona Ref. 6262 “Paul Newman”
The ref. 6239 Daytona worn by Paul Newman himself holds the record for the highest price ever paid for a watch at auction. And “Paul Newman” Daytona watches similar to that of the late actor’s, like this ref. 6262, also command a premium. The ref. 6262 is considered a transitional model and was produced only in 1970. Few were made, and the particular example here, with its Paul Newman, or exotic, dial make this watch quite rare.

Under this watch’s steel 37-millimeter-wide case ticks Rolex’s handwound cal. 727 that’s based off a Valjoux 72. This column-wheel chronograph movement has 17 jewels and a 48-hour power reserve. It beats at 21,600vph.

A. Lange & Söhne Zeitwerk Striking Time
This Zeitwerk, considered an horologic marvel, relies on a constant force escapement so it could generate adequate energy for the jumping hour and minute readouts. Placed together with this large digital display is a sonnerie that chimes the hour in a low-pitched tone (as a gong is struck by a hammer on the left side of the movement) and the quarter-minutes in a higher note (another hammer on the right side of the movement takes care of this).

Powering these mechanisms is the in-house, handwound cal. L043.2, which has 78 jewels and a 36-hour power reserve, and which beats at 18,000vph. Housing the mechanical bits is a 41.9-millimeter case made from 18-karat white gold.