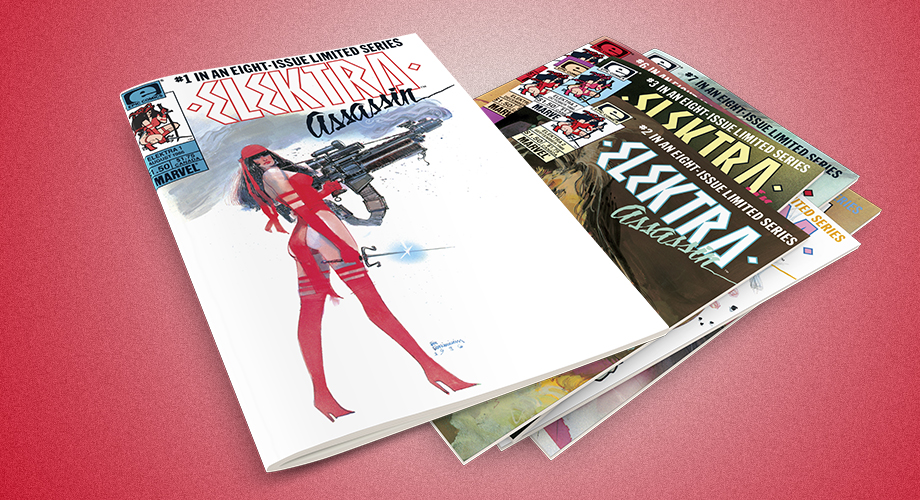 “Elektra: Assassin” occupied a very specific time, both in its setting and in the time of its creation. The comic was written during what you might call a Dark Renaissance of the comic books age, a time when the level of writing was on a definite upswing and the material was finding its way into darker and darker corners of the mind. The tone of the era was best described as ‘gritty.’ The two writers most associated with this era and its accomplishments were Alan Moore and Frank Miller. Alan Moore had finished his amazing “Swamp Thing” run and was mid-way through his unparalleled series “Watchmen.” Frank Miller, who had brought his skills to the fore writing “Daredevil” had just released his seminal Batman series “The Dark Knight.” Those titles would go on to be considered the pinnacle of the comic field’s achievement, and their impact is still felt today. “Watchmen” was made into a film not long ago, despite having completed its only run decades ago. “The Dark Knight” was not only the title of Christopher Nolan’s groundbreaking Batman film, but the 1980 comic’s core Batman/Superman clash was at the heart of the recent film by Zack Snyder.

“Elektra: Assassin” came out between August of 1986 and March of 1987, and it falls within this spectacular arc of achievement. Written by Miller, it also highlights a specific time within the life of, if we’re being technical, an accessory character to Marvels’ “Daredevil.” Elektra was a major character in Daredevil’s life, his one time girlfriend and sometime adversary. Elektra and Matt Murdock fell in love in college: he would go on to fight crime as a lawyer and as a costumed superhero, and she would go on to become a ninja assassin with the mystic martial arts group known as The Hand. When Elektra came back into Murdock’s life, it was as a hired killer. She was stabbed in a gangland battle, and died in Murdock’s arms.

“Elektra: Assassin” now stands as one of the true stand-alone gems of the era, a piece that takes place within the standard Marvel Universe but almost completely under its radar.

However, “Elektra: Assassin” happens in the years in between those times. It covers a time when Elektra was away, having left the Hand but not yet returned to New York. Daredevil never shows, and in fact is barely mentioned. Elektra herself is the center of the story, and we also learn a lot more about the Hand, which had been heretofore swathed in shadow. And within that very specific time, as we see, she covered a lot of ground. “Elektra: Assassin” tells the story of Elektra as a freelance assassin, unwittingly running afoul of the Hand again and learning about an attempt by them to gain control of the U.S. Presidency and initiate a nuclear war to destroy all mankind.

The first issue of the comic was received very… confusedly. We begin with Elektra in an insane asylum, her mind broken and her memories fragmented. The storytelling was non-linear for that first issue, and combined with  Sienkiewicz’ breathtaking but non-traditional art, it made for a very difficult introduction, one that was off-putting for many readers, including myself. However, we soon came to appreciate what was happening as the story unfolded, and “Elektra: Assassin” now stands as one of the true stand-alone gems of the era, a piece that takes place within the standard Marvel Universe but almost completely under its radar.

As Elektra comprehends and then comes to counter the Manchurian-Candidate-like plan of the Hand to install a puppet into the White House, we are treated to a struggle between the Hand, S.H.I.E.L.D., and Elektra with her unlikeliest of allies, a foul-mouthed slack-off former-criminal S.H.I.E.L.D. agent named Garrett. Garrett, completely out of his depth, shifts slowly from enemy to ally as he comes to see the scope of what they must fight. Garrett is lazy, disillusioned and equal parts thug and corrupt cop, but when the Hand’s plan comes to light even he is so shocked by its evil that he realizes the insane ninja murderess is really the only hope humanity has.

Miller’s terse, action-oriented dialogue and writing is given visual splendor by Bill Sienkiewicz’ paintings, using color and shivering line and logo to recreate a miniature war that is half mystical, half noir. The comic features some amazing sequences, from Elektra reviewing field footage as she fights off a squad of armored S.H.I.E.L.D. agents, to a spectacular underwater battle between Garrett and a team of ninja dressed like accountants. The whole thing concludes in a desperate battle at the Lincoln Memorial.

What may be most amazing about the comic is that Miller set it in the standard Marvel universe, but it slides right under the noses of the larger-scale heroes, despite being an attempt to both control the Presidency and destroy the world. The battle is fought beneath the radar, almost a one-woman war against The Hand, and even the victory goes unremarked… although, you might get a kick out of who ends up controlling the Presidency.

Who Watches The Watchmen?

The finest example of how a graphic novel can achieve!

Life In the Margins

A young man gone, but not forgotten.